With around 3,500 collector vehicles on the docket for Mecum Auctions’ annual visit to Kissimmee, Florida, trying to select just a few favorites might be too much to ask of anyone, even of someone who isn’t actually bidding. Thus, yesterday I shared my favorites from among vehicles that might be considered “affordable” by the typical classic car enthusiast, and today I’m upping the ante with a similar list, but this time focused on featured premium vehicles.

Some quick background: In this exercise, we ask ClassicCars.com Journal staffers covering auctions to share their personal favorites from the auction docket. Basically, we assume money is no object, nor impediment, and we allow our reporters to be very personal with their selections, picking the vehicles that they would like to add to their personal portfolios.

While it usually is the high-end cars that are featured in auction previews and post-sale coverage, this pick-em format can provide some sense of the scope of an auction docket, and also shares some insights into the quirks and tastes of our staff members.

But that’s OK. After all, every actual car collection reflects the quirks and tastes of its owner.

So, with all of that in mind, here are Larry’s likes among what might be considered the featured vehicles at Mecum’s 2019 Kissimmee sale: 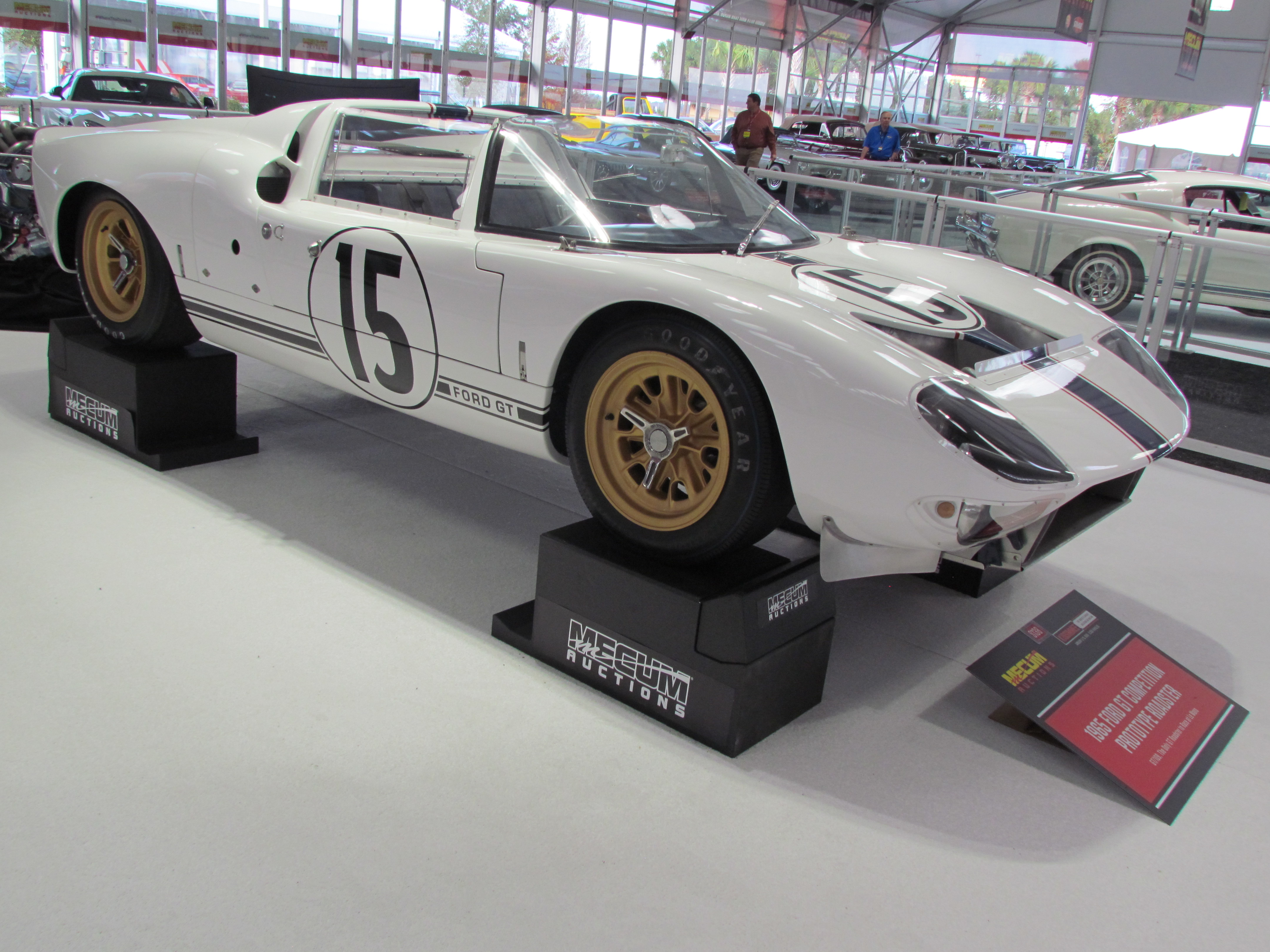 This is the only Ford GT40-based open-top car to have raced at Le Mans, where GT/109 was driven by Guy Ligier and Maurice Trintignant, albeit for 11 laps before suffering transmission failure. The two Ford GT40 coupes in that 1965 race also failed to finish, but a year later Ford not only won the race, but would win again the ensuing three years. GT/109 ended up in a Ford garage, where custom car builder Dean Jeffries saw it and convinced Ford to sell it to him. Jeffries owned the car for 45 years before selling it to auction company owner Dana Mecum, who had it restored to its Le Mans specification, restored so well that it took second in the special GT40 class at Pebble Beach in 2016. 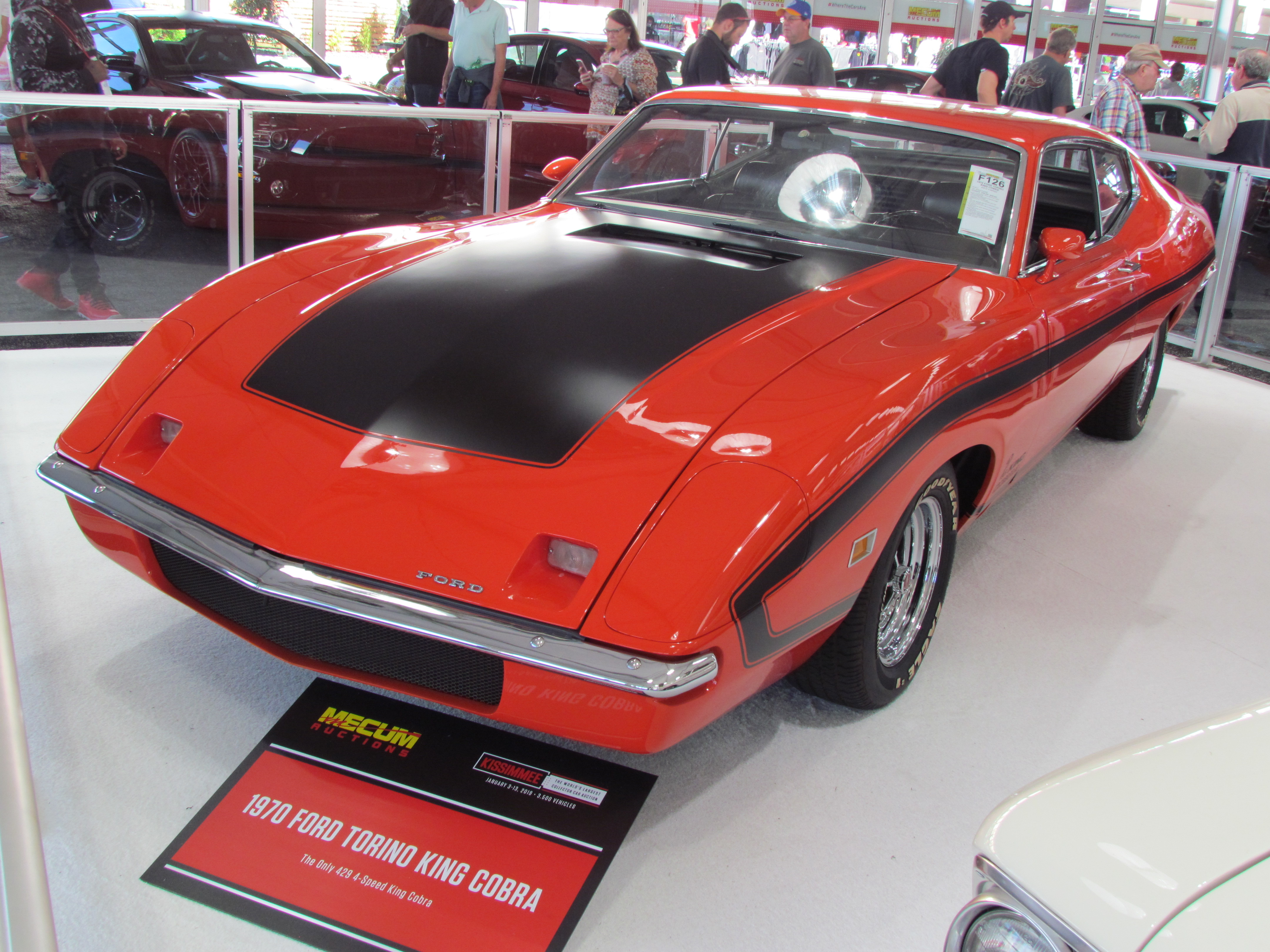 Sitting side by side by side in their own corral in the “glasshouse” tent, which contains many of the auction’s featured vehicles, is a trio that includes a 1969 Ford Mustang Boss 429, 1964 Ford Thunderbolt and 1970 Ford Torino King Cobra. Together, they would make for a great car collection, though given my choice, the one I’d most want is the Torino King Cobra. Ford built a trio of these cars in hopes of racing with slick aerodynamic styling (by Larry Shinoda of Corvette fame) in NASCAR, where the pointed-nose, big-winged Dodge Chargers and Plymouth Superbirds were dominating the superspeedways. Of the three Torino specials, this was the only one with a 429 Boss V8 and a 4-speed gearbox. It also is the only one with a convex rear window. The cars were never raced as new management at Ford abandoned the effort. This one went to Bud Moore Engineering, one of the NASCAR teams. Moore eventually sold the car, which wound up parked out in a field in South Carolina for many years before being rescued and restored. 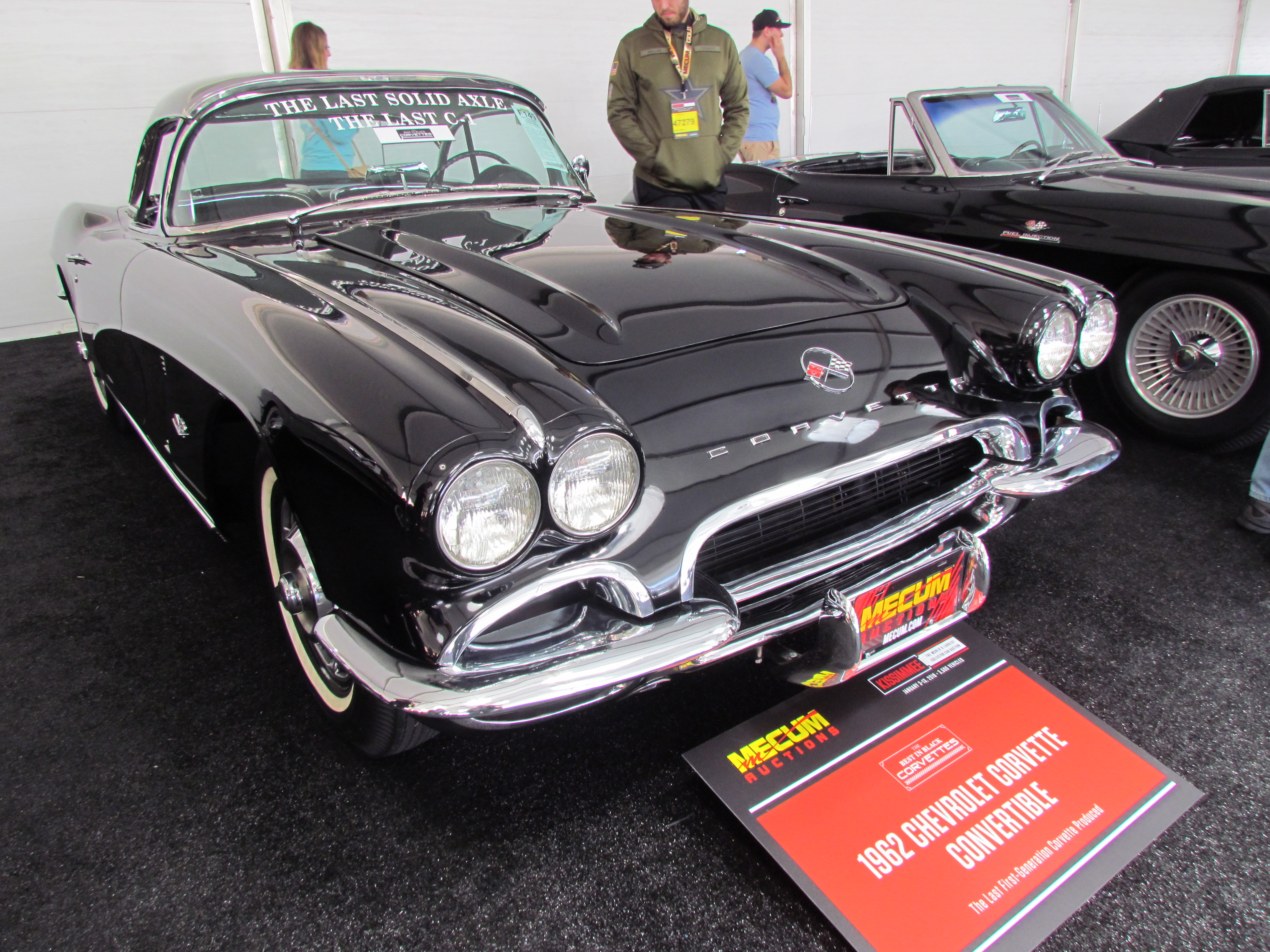 There’s another clear-walled tent that features a bunch of cars, nearly all of them wearing black, including this 1962 Vette, which happens to be the last first-generation, solid-axle example to come off the assembly line. Jimmy Ezell bought the car, powered by the optional 327cid/300 horsepower V8, in 1965 after it had been driven 11,000 miles. He drove it for a couple of years but put it into storage when he left for the Air Force. He took it out of storage in 1995, and in 2005 completed the car’s restoration. Ezell sold the car, which still shows fewer than 40,000 miles, in 2015.

A pair from Petty

The Petty Garage Collection has consigned both cars and Road Art to the Mecum Auction, and I’d be thrilled with either of these vehicles. The 1951 Pontiac Streamliner station wagon was a 60th birthday present to Richard Petty from his late wife, Lynda. It originally was sold by a dealership in High Point, North Carolina, and has undergone a complete restoration, from its 268cid inline 8-cylinder engine to its Fulton traffic light finder feature. The 1949 Buick Roadmaster touring sedan also is from King Richard’s personal collection and carries a 320cid Fireball 8-cylinder engine with fender-mounted horns. 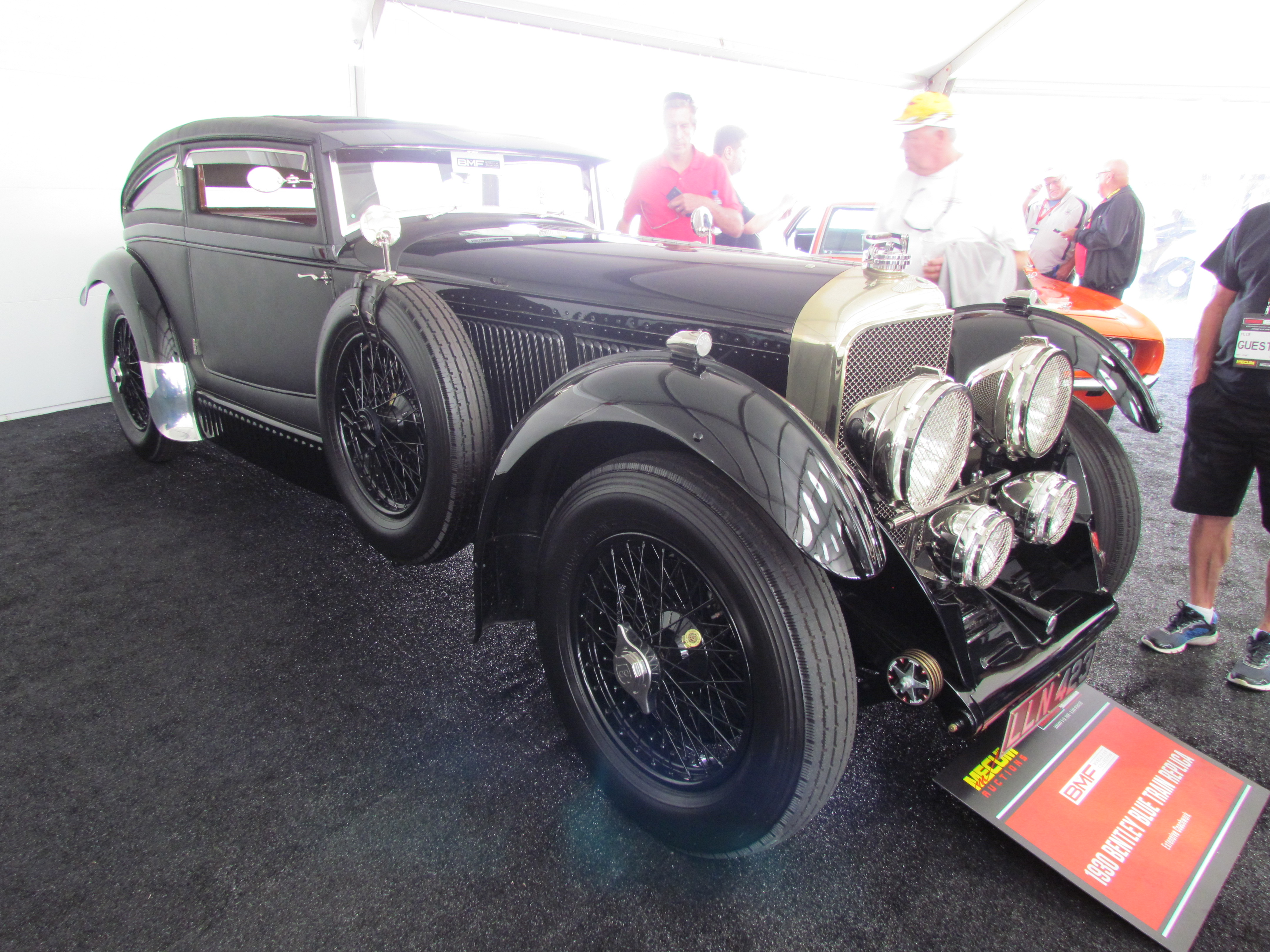 I really don’t like replica cars, but I would make an exception for this one. In 1930, Bentley chairman Captain Woolf Barnato, a three-time Le Mans winner and heir to the Kimberly diamond-mining empire, accepted a bet that he couldn’t beat the Calais-Mediterranee Express, the “Bleu” train, in one of his cars in the run up Europe to the English Channel. Woolf won the race in his Speed Six, and to celebrate, Bentley produced a few special “Blue Train” Mulsanne Speed models with streamlined coachwork by Mulliner. The car on offer at Mecum is a spectacularly done replica by a British coachbuilder, with a Bentley B80 inline 8-cylinder engine, leather and vinyl-covered body, and red leather interior with red carpeting.

Everett Chrisman and his sons Art and Lloyd built the first dragsters to break the 140 and 180 mph barriers, and a 1934 Ford coupe that did 140 on the salt flats at Bonneville. They put their experiences on paved and alkaline surfaces together with this 1930 Ford-based but rear-engined coupe built around a full roll cage, and with aircraft-surplus seat belts and a floor-mounted fire extinguisher, just in case. They set records at Bonneville in 1953 and returned in 1954, but with a Chrysler Hemi powering the car. Again they set records, and in 1955 they were back and this time got to 196 mph. They sold the car in the ‘60s to George Barris, who made some modifications so the car could be used in the TV series, The Many Loves of Dobie Gillis. Eventually, the car went back to Art Chrisman, who restored it to its Bonneville Hemi configuration. He then sold it to Joe MacPherson who showcased it in his famous Joe’s Garage. 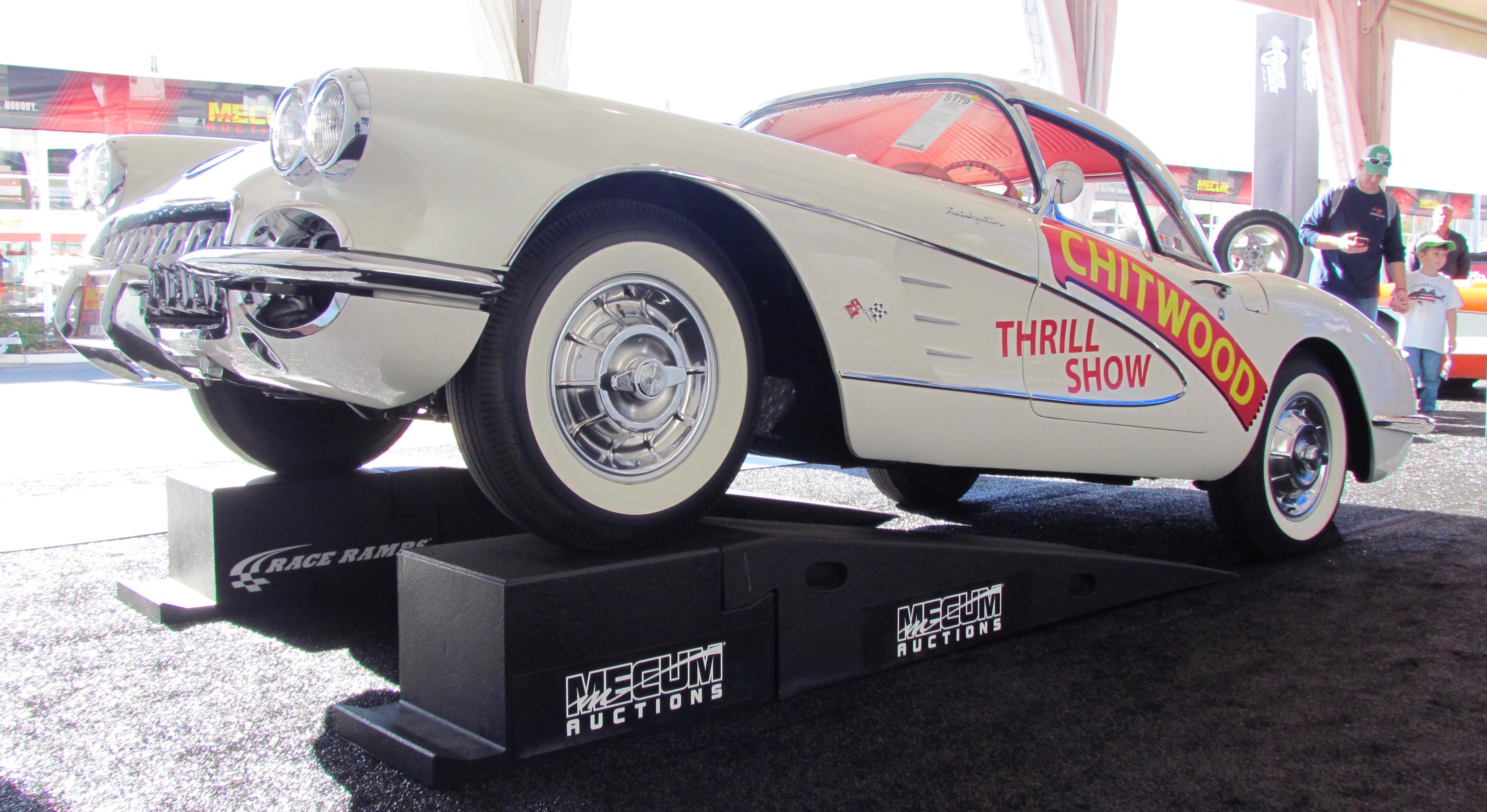 Joie Chitwood is believed to have been the first driver to wear a seat belt while racing in the Indianapolis 500 (that was in 1941, he competed in the famed race seven times, finishing as high as fifth place). After the war, he launched his barnstorming thrill show featuring automotive stunt driving (he also did stunt driving for Hollywood movies). Chitwood bought this ’58 Corvette from a dealership in Wernersville, Pennsylvania, and drove it that year in his shows. It has a 283cid V8 engine, 4-speed manual gearbox and 4.11:1 Positraction rear end. After the season ended he sold the car. After that owner’s death, his widow sold it to a couple who did more of a preservation than a restoration. A subsequent owner did a professional restoration and won an NCRS American Heritage award in 2015. 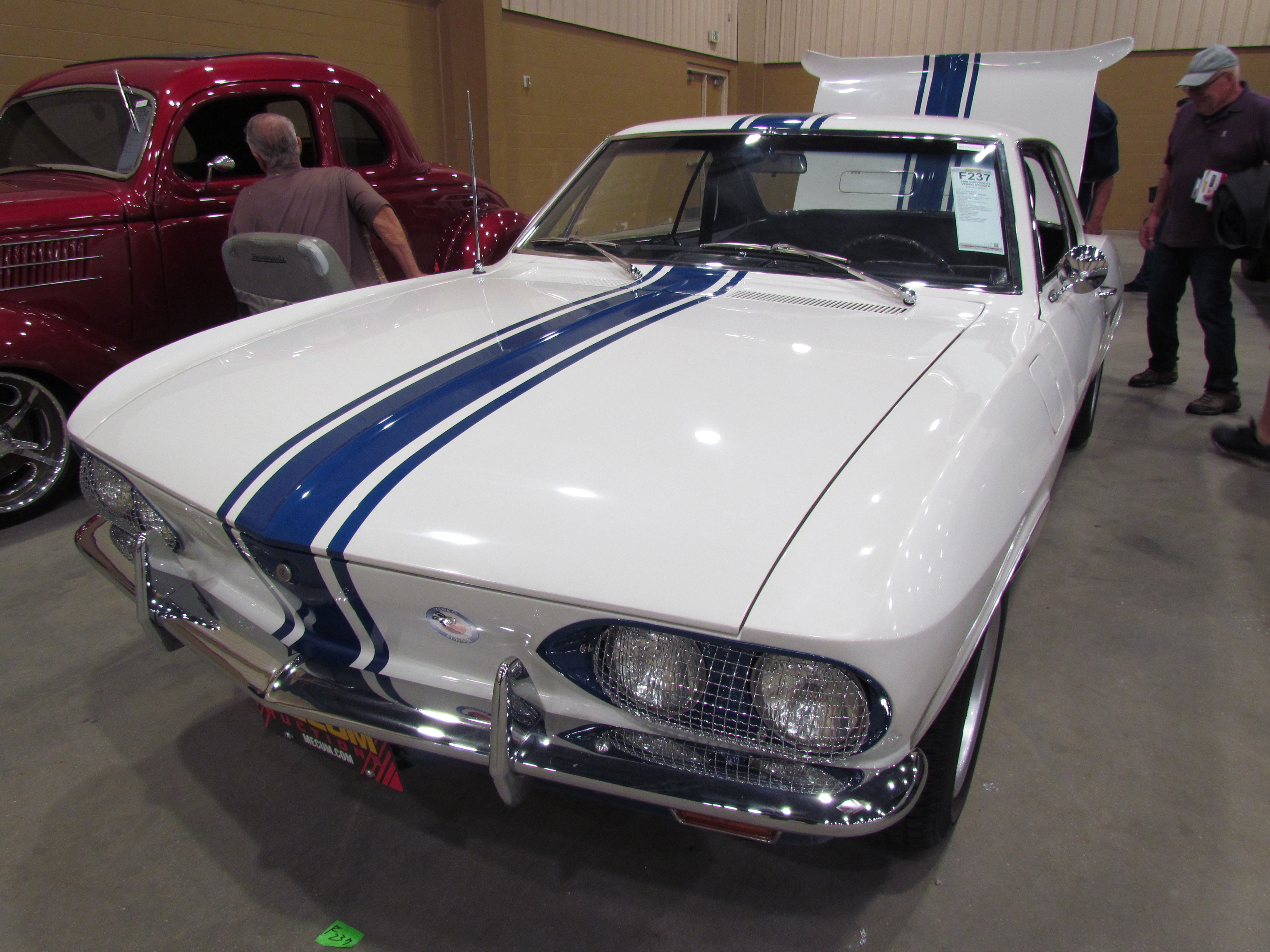 Though likely to sell for a lot less than some of the cars on this list, this one makes up for it in reputation. It’s a Yenko Chevrolet Corvair Stinger that was restored in 2013. Don Yenko was the Chevrolet dealer in Canonsburg, Pennsylvania, who built race cars of renown. His Stinger version of the Corvair had a 164cid flat-6 but with 4 carburetors, as much as 240 horsepower, as well as heavy-duty suspension, quick-ratio steering, Positraction rear and Cadillac brakes. 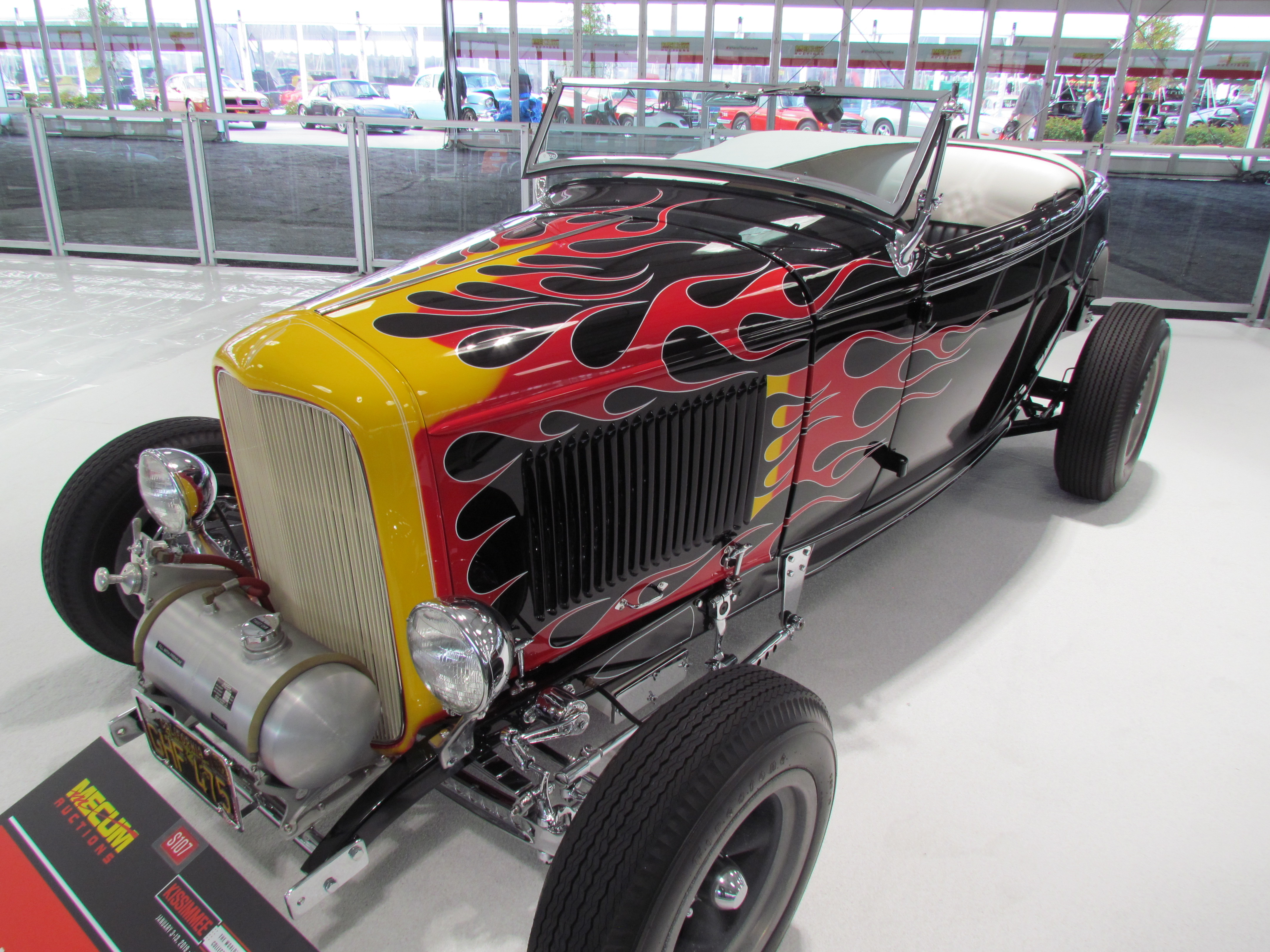 We featured this hot rod in a story in December 2017 and after seeing it in person, I cannot disagree with the statement that proclaims it “The World’s Most Iconic Hot Rod.” 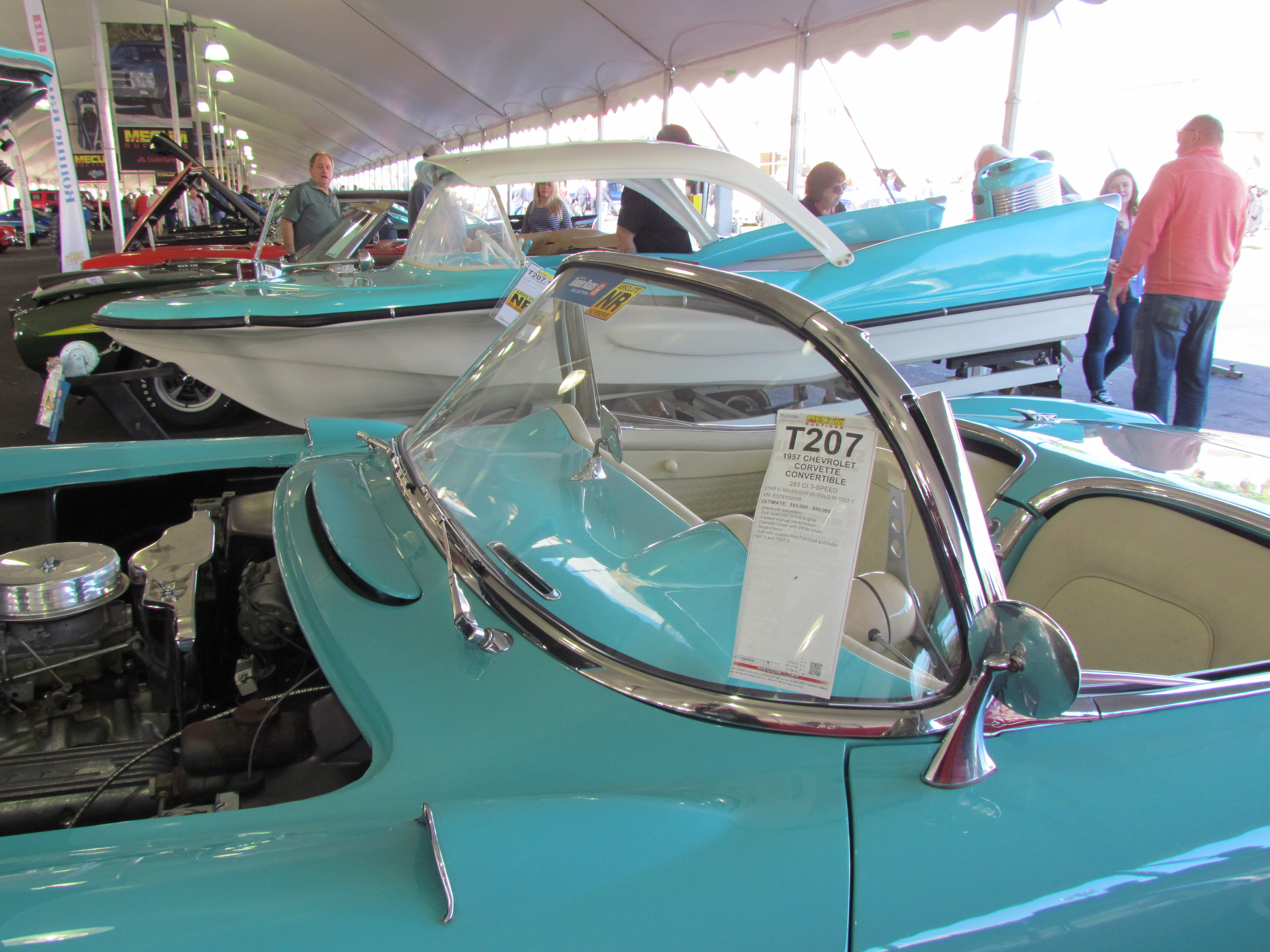 Like the Yenko Stinger, this lot may well sell for less than six figures, but it will be a purchase that is likely to draw a lot of attention when displayed at car shows, or boat shows for that matter. In a single lot you get a 1957 Chevrolet Corvette, 283cid/3-speed gearbox in turquoise (Cascade Green) and white along with a matching-colored and also fiberglass-bodied Red Fish boat, and the boat’s trailer. Note the ‘50s-style, car-like tail fins on the boat. Back in the day of big fins, it was common for pleasure-boat manufacturers to copy automotive tail fins, and there’s a group of enthusiasts who collect and show the cars and boats together. PS: The Corvette does have a trailer hitch for towing the boat and trailer.