Editor’s note: We’ve selected four summer driving-season events that we will feature this month as potential road trips for you to consider. We began with Carlisle Events. Next up were the Rodeo Drive Concours d’Elegance on Father’s Day weekend in Los Angeles and the Concours d’Elegance at Copshaholm, July 13 in South Bend, Indiana. Conclusing our tour, might we suggest Hot August Nights, the hot rod and custom car celebration that takes place August 2-11 in northern Nevada. 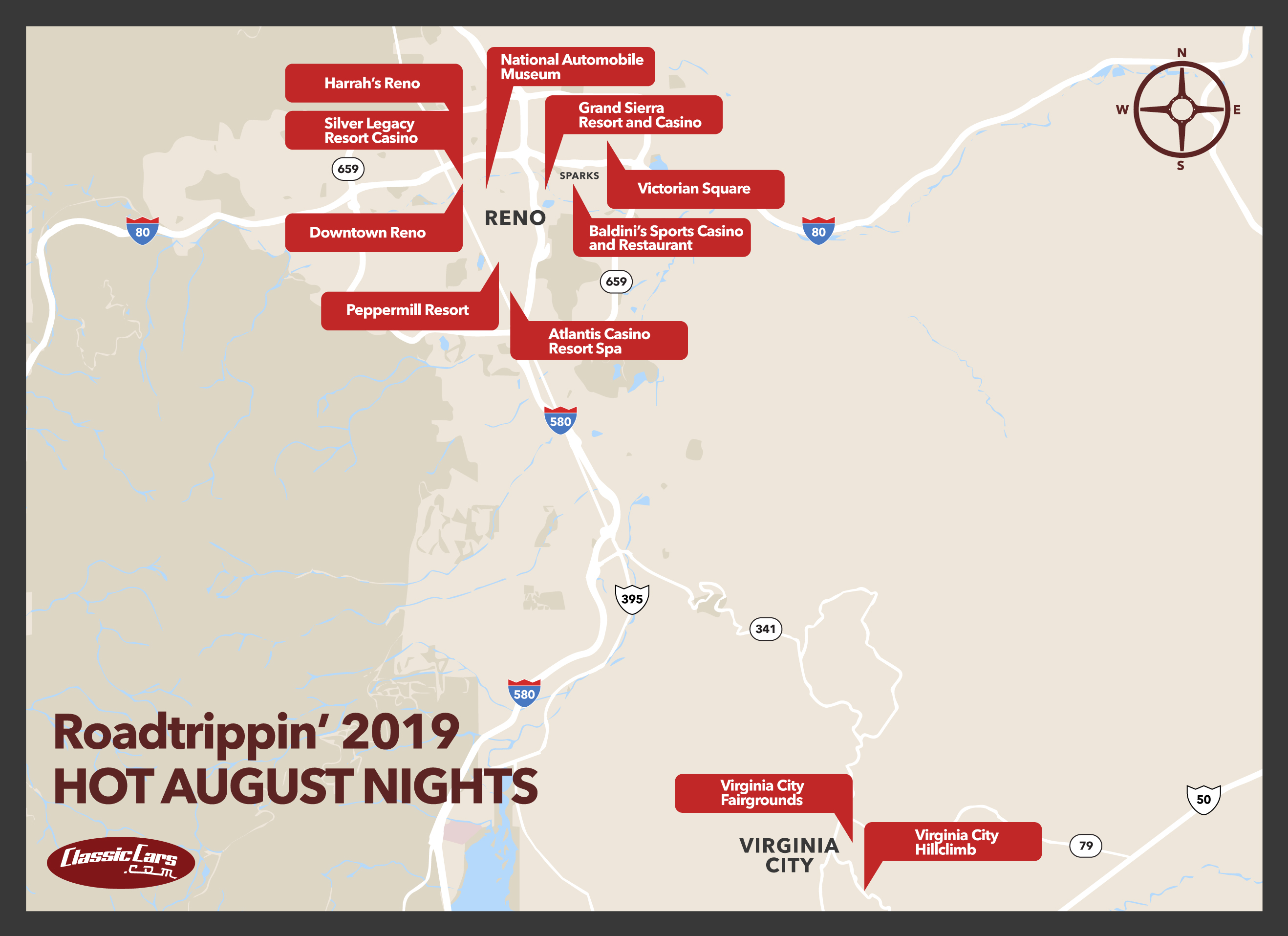 On August 1, 1986, around 10,000 people gathered at the Reno-Sparks Convention Center in northern Nevada to relive and celebrate the 1950s and ’60s and the early years of rock ’n’ roll at a concert featuring the Righteous Brothers, Jan & Dean and Wolfman Jack.

A considerable number of those attending arrived in cars from that same earlier era, and crowds gathered along Virginia Street as the cars paraded toward the convention center.

We’re told that, “The car owners were thrilled to show off their cars. They’d never had so many people ‘oohing and aahing’ over their ‘works of art.’ It was a proud moment for classic car owners.”

The event also provided a boost to the local economy since, traditionally, August was a slow month for tourism in the high-desert area.

“The weather was HOT, the month of AUGUST was right, therefore, HOT AUGUST NIGHTS was born,” proclaims the Hot August Nights website.

From that single concert and classic car gathering, Hot August Nights has grown into an annual event stretching over two weekends and multiple locations. The 32nd Hot August Nights is scheduled for August 2-11 and continues to showcase vintage vehicles and vintage entertainers.

Hot August Nights begins with car shows, cruises and entertainment events in Virginia City, which became a frontier boom town after the discovery of the Comstock Lode of silver. Within a few years, as many as 25,000 people were living in the area. Among them was Samuel Clemens, who started writing under the name of Mark Twain. The population plummeted after the mines played out, but the historic frontier architecture and spirit have been preserved.

By the way, Hot August Nights isn’t Virginia City’s only automotive celebration. As early as 1964, an auto race up Mount Davidson was organized. The annual Virginia City Hillclimb is scheduled this year for September 21-22.

The car stuff runs all day and the entertainers take over in the evening. The lineup this year includes KC and the Sunshine Band, Chubby Checker, The Legendary Temptations, Don Felder, the Little River Band, Mumbo Gumbo, Pablo Cruise, Greg Golden Band, and Turn the Page, a band that pays tribute to Bob Seger and the Silver Bullet Band.

Reno is located on the Truckee River that flows northward out of Lake Tahoe. It was developed to provide services for pioneers heading west on the California Trail and grew after the transcontinental railroad was completed.

The town is famous for an arch, erected for the Transcontinental Highways Exposition in 1927 and afterward would proclaim “Reno: The Biggest Little City in the World.” The city became something of a divorce capital of the world for several years and as a place for northern California residents to gamble. More recently, it has attracted industries spinning off and out of Silicon Valley.

Reno also is the home to the National Automobile Museum, which houses part of what once was the car collection of hotel and casino owner William Harrah, who had nearly 1,500 vehicles he kept in warehouses-turned-museums in Sparks. After Harrah’s death in 1978, Holiday Inn acquired his holdings. It donated nearly 200 vehicles to a group that established the museum in Reno with the others selling at auction for more than $100 million in the mid-1980s.

Fans of the television western Bonanza will remember the map that was featured as part of each weekly episode. It showed The Ponderosa ranch stretching from Lake Tahoe to Carson City with an arm reaching to a point midway between Reno and Virginia City. Except the top of the map didn’t point to the north but toward the east.

Actually, Lake Tahoe and its recreational sports of warm-weather water and winter snow and ice actually is located south and slightly west of Reno, with the California/Nevada state line bisecting the huge lake.

Just west of the lake is the site of the 1960 Olympic Winter Games and just to the east is the famed Rubicon Trail of Jeep lore and legend. Travel farther south and you can visit Yosemite and Death Valley National Parks.

Go a few hours southeast of Reno and you can drive past Area 51, the mysterious military/UFO base. A few hours northeast of Reno are the Bonneville Salt Flats, but much closer and to the north is the Black Rock Desert, home not only to Burning Man but to the actual land speed record — 763.035 mph by Thrust SSC.

Another thing to keep in mind: if you’re going to Hot August Nights is that the Reno event ends just in time for you to extend your trip and head for Monterey Car Week.