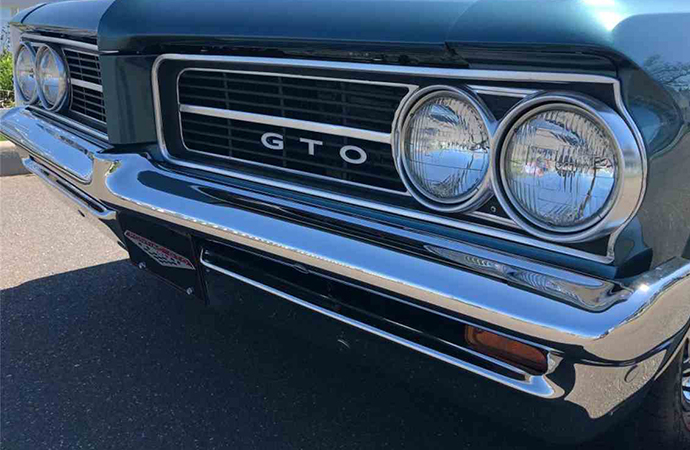 Editor’s note: This is part three of a five-part series looking at the history and future of the muscle car. Read the whole series during July, when the ClassicCars.com Journal celebrates all things muscle.

The mid-to-late 1960s through 1970 were the magical years for muscle cars, when the domestic automakers were competing to see who could come up with the fastest and most-audacious horsepower machines.

The roots were planted nearly a decade before, starting in 1956, when Semon Emil “Bunkie” Knudsen was appointed general manager of General Motors’ Pontiac Division with the mission to improve the brand’s public perception and to ignite the lagging sales of its vehicles.

Knudsen took Pontiac to the race track. “Wide-track” became the new advertising theme, backed by the improved performance of cars, led by new chief engineer Pete Estes, who came over from Oldsmobile, and the recruitment of his assistant, John Z. DeLorean, who had been at Packard.

Add advertising executive Jim Wangers to the mix, and things would get very interesting.

Long before “We Build Excitement” would become the brand’s advertising tag line, the Knudsen/Estes/DeLorean/Wangers crew did just that. It created the Detroit muscle car phenomenon, although at first it had to do so with a back-door effort to avoid the scrutiny of the GM bureaucracy.

GM had an internal rule that reserved its largest V8 engines for use in its largest cars. But the Pontiac engineers realized that there was room under the hood of the “intermediate” (mid-sized) Tempest model for the 389cid V8 from the Bonneville. Typically, the Tempest carried a meager, 140-horsepower inline 6-cylinder. But the big Bonneville benefited from its 325-horsepower unit.

The solution: A special-option package for the 1964 Tempest LeMans. Check the right boxes and for less than $300 you got the V8, heavy-duty 3-speed or Muncie 4-speed manual transmission, stiffer suspension, improved steering gear and tires, dual exhaust, and badges that proclaimed your car as a GTO.

That’s GTO as in the famed Gran Turismo Omologato of Ferrari fame (pity that the Italian sports car maker hadn’t trademarked the name).

Enhancing the car’s image was Wangers recruitment (actually, his creation) of a rock ’n’ roll band, Ronnie and the Daytonas, to record what became a hit song, Little GTO. That, and a Car and Driver magazine cover proclaiming “GTO vs GTO” and a story about a supposed drag race between the Pontiac and Ferrari models.

By the way, the GTO-optioned Pontiac could sprint to 60 mph in about 6.5 seconds and run the quarter-mile in less than 15 seconds.

By 1966, GTO became a separate model line for Pontiac. Empowered by such a vehicle, Pontiac soared to third in sales among all Detroit automakers, and Knudsen was promoted in 1961 to head Chevrolet. Estes moved up at Pontiac, and then took over Chevrolet when Knudsen left for Ford (and later would become president of GM). In 1965, DeLorean got the top job at Pontiac and, at age 40, became the youngest person to head a GM automotive division.

As you might imagine, the success of the early GTO created some controversy within the GM family. Other divisions wanted their own “muscle cars,” and they got them. And the rest of Detroit jumped on the bandwagon as well.

Before the end of the 1966 model year, Oldsmobile offered a 4-4-2 upgrade on its F-85/Cutlass. The numbers came from the four-barrel carburetor, four-speed manual transmission and dual exhaust. For 1967, The Cutlass Supreme 4-4-2 offered a new 350-horsepower, 400cid “Force-Air” engine with ram induction.

Buick tried to match the GTO with its 325-horsepower Skylark Gran Sport.

Chevrolet’s response was the Chevelle/Malibu SS 396, equipped with a 375-horsepower, 396cid V8, dual exhaust, four-speed manual gearbox, stiffer suspension and a 160 mph speedometer. For 1965, 200 Z16 versions were produced with stiffer frames, narrowed rear axles, Impala brakes and hydraulic lifters like those used on the Corvette.

Meanwhile, Mopar engineers started the decade working on a NASCAR engine that would wind up setting the trend for large-displacement V8 engines for street or strip, the legendary 426 Hemi that used a revolutionary hemispheric cylinder-head design to improve air flow at all rpm, and which was rated at 425 horsepower.

The sturdy Hemi ruled NASCAR after it showed up to win Daytona in 1964, was banned in 1965 for the lack of homologation, then was back to its winning ways in 1966 as thousands of 426 Hemis found their way into muscle cars for the street.

Things got serious for Chrysler in 1966 with the introduction of the Dodge Charger, a Coronet-based fastback available with the 426 Hemi, and the restyling of the Plymouth Belvedere/Satellite, dominated by the GTX version with the 440cid V8.

For 1968, the Dodge and Plymouth intermediates were ready for true muscle car makeovers, with Plymouth offering the Road Runner with a standard 383-cid V8, the GTX with a 440 “Super Commando” V8, or the 426 Hemi, and the Dodge Charger with corresponding engine choices.

The NASCAR influence on Mopar performance was most exemplified by the Road Runner Super Bird and the Charger Daytona with their long, aerodynamic front-end add ons and towering rear spoilers. As outrageous as they were on the street, they were effective on the NASCAR track.

Hemi V8s are revered today as muscle car icons, and any numbers-matching Mopar powered by one draws a strong premium value.  For instance, an original 1970 Plymouth Hemi ‘Cuda could set you back in the seven figures.

GM and Ford played catchup with their own 427cid big blocks.  In the showrooms, Ford offered its 427 V8 as an option in its midsize Fairlane and a 390cid V8 in the Mercury Comet Cyclone. Ford’s focus was on beefing up its Mustang, highlighted by such things as the Boss 428 with the Cobra Jet 428 racing engine under its long hood.

The Cobra Jet was used by the end of the decade in the Ford Talladega and Mercury Cyclone.

GM used its 427 in a number of high-performance applications, ranging from Corvettes to Impala, and notably in such towering performance beasts as the Camaro ZL1.

In the heyday of the Detroit Muscle Car, even American Motors joined the party with its Rebel SST and Rebel Machine models, and its Rambler Scrambler.

Model year 1970 is seen as an apex for muscle cars as a confluence of engine technology and corporate will came together to create some of the greatest muscle cars of the era. But it all began fading away the following year, as Department of Transportation regulations and soaring insurance rates spelled doom for high-performance muscle cars.

The final fatal blows were right around the corner, when the OPEC oil embargo of 1973 heralded the end of cheap, plentiful gas, and emissions regulations strangled the horsepower output of once-mighty engines.

It was fun while it lasted, but the Detroit muscle car era had come to an end, though it was an end that would prove to be only temporary.

Read the other parts of the series:

Question of the Day: What is your opinion of the Ford Taurus SHO?