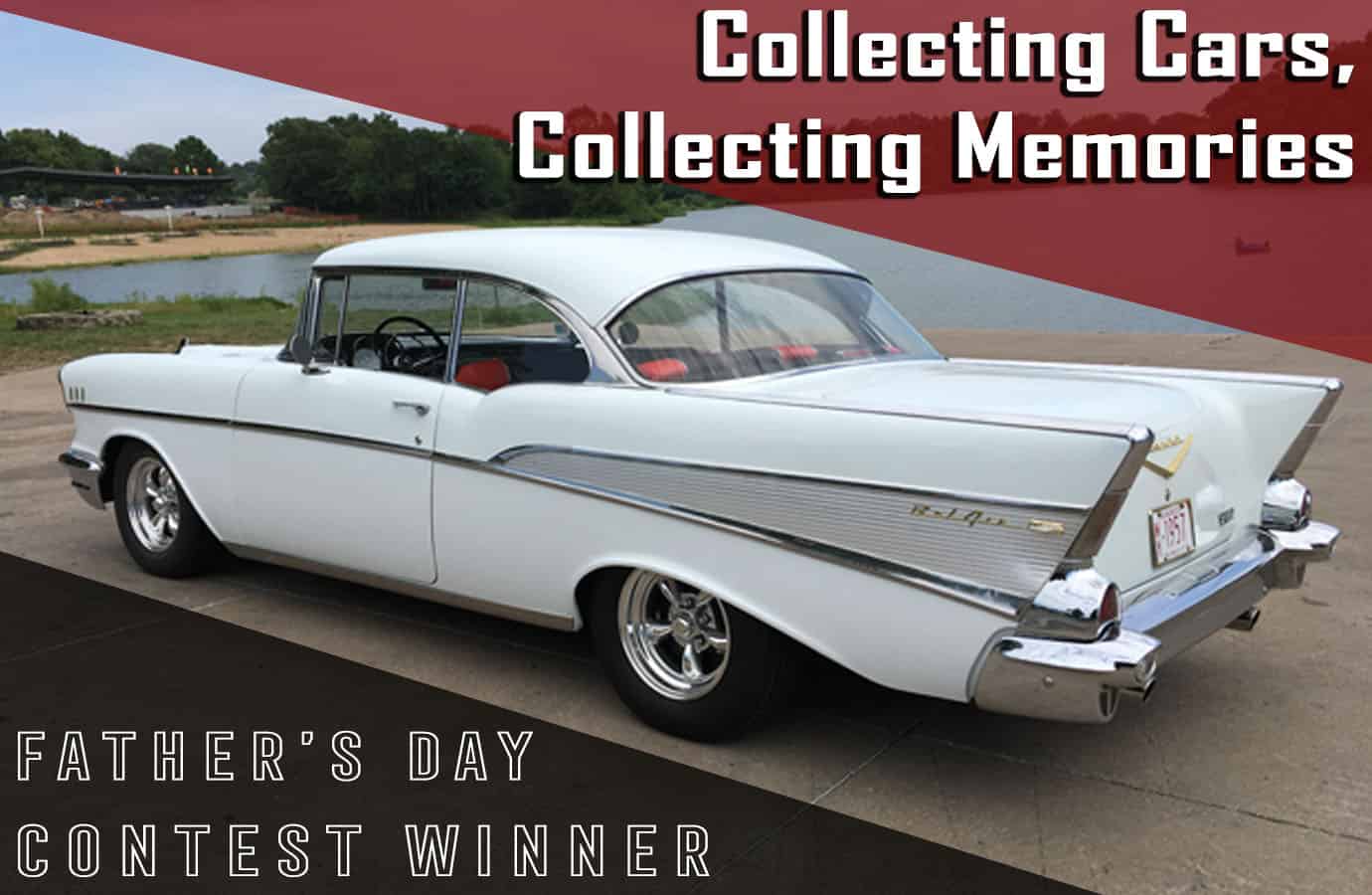 Editor’s note: This story was selected as our favorite submission for our Collecting Cars, Collecting Memories contest. Kent will receive a special gift basket.

As a way to celebrate Father’s Day, we posted every story we received. Thank you to all who submitted.

At the time, I was working at Don’s Speed Shop in Lawrence, Kansas, which was 30 miles from home in Kansas City, Kansas.

Instead of a rental car, I asked the insurance company to pay me to supply my own car. As was usually the case, this ’57 had been ridden hard but the body was really solid.

I stripped and repainted (with spray cans of lacquer) the dash — which had been painted with a brush — along with the door panels, headliner and most everything else. The seats were covered in black Sears “roll and pleat” seat covers.

My Chevelle was repaired at the Chrysler-Plymouth dealership where my dad was the parts manager. By the time I got it back and the insurance company paid me, this ’57 was free.

I was going to sell it, but my dad — who had recently joined the Shriners — wanted it so he could be in the Antique Car Group.

He had it painted at a local body shop; a quickie respray over the original imperial ivory. He also redid the door panels, headliner, carpet and had the inside window moldings chromed.

When he discovered that most of the Antique Group was Model A Fords, he felt kind of out of place at the parades. Dad, who to my knowledge had never owned a horse, decided to buy a big Palomino, with a silver saddle, cowboy uniform, horse trailer and joined the Mounted Patrol Group!

Of course, he added a trailer hitch and air shocks to the ’57 and used it as the tow vehicle for going to parades and other functions.

After a few years, he bought a ’64 El Camino as the tow vehicle but fortunately held on to the ’57. At one time, he moved it to a garage at his small log cabin in Roscoe, Missouri. He was a car guy and was out of room at his home.

My dad passed away in 1985 and the ’57 was mine again. I left it at my mom’s house since my garage was full of Camaro and Corvette toys. Although I tried to drive it occasionally, I decided to sell it in 1995. Regret laterr set in and I spent two years trying to find it.

Finally, I found it in Springfield, MO and was able to buy it back in 2001! It looked pretty much like it was when I sold it but I paid a little more than $500 though.

Since then, I’ve continued to maintain and improve things — power steering, power windows, disk brakes, air, new crate motor, 5-speed, new interior, etc. It still has that 1969 quickie paint job, spray can dash and chrome inside moldings but I think dad would approve of the upgrades!