Mecum Auctions says around 2,000 vehicles will be up for bidding this week at the 31st annual Dana Mecum’s Original Spring Classic auction, which in recent years had been held at the Indiana State Fairgrounds, one of the most remarkable settings for such a collector car sale.

The fairground includes several large exhibition halls, a sports arena (where the actual bidding takes place), and even a historic dirt-oval racing track with covered grandstand.  Part of the fun of attending this sale is searching out all the nooks and crannies where the cars are on display.

Upon entry, you find yourself in the Exposition Hall, where the first thing you see is Keith Busse’s Corvette Pace Car Collection, as well as the show-car version of the racer that Mecum will sponsor in the Indy 500 later this month.

Keep walking and you enter the stunning West Pavilion with high windows that emit a light that makes the cars appear to glow in the early morning and late afternoon. Among them this year are the cars from the Reggie Jackson Collection.

From the West Pavilion, you can enter the Indiana Farmers Coliseum where the bidding takes place, or you can go to the South Pavilion, where there are several large rooms and hallways, each of them housing more cars.

Tucked between the South Pavilion and Coliseum is the Youth Arena, where some of the auction’s most cherished vehicles are displayed, including the Golden Sahara II show car, the redone Kookie’s hot-rod, and what is believed to be the only Sunfire Yellow 1967 L88 Corvette.

And there are still the Champions Pavilion and the Blue Ribbon Pavilion to explore, as well as some huge tents and outside parking where yet more cars  await their turns across the block.

I wandered and explored and photographed for a few hours Tuesday afternoon. The docket is simply amazing. Below are some of my favorites. However, my favorites may not be your favorites. You need to be here and pick for yourself. 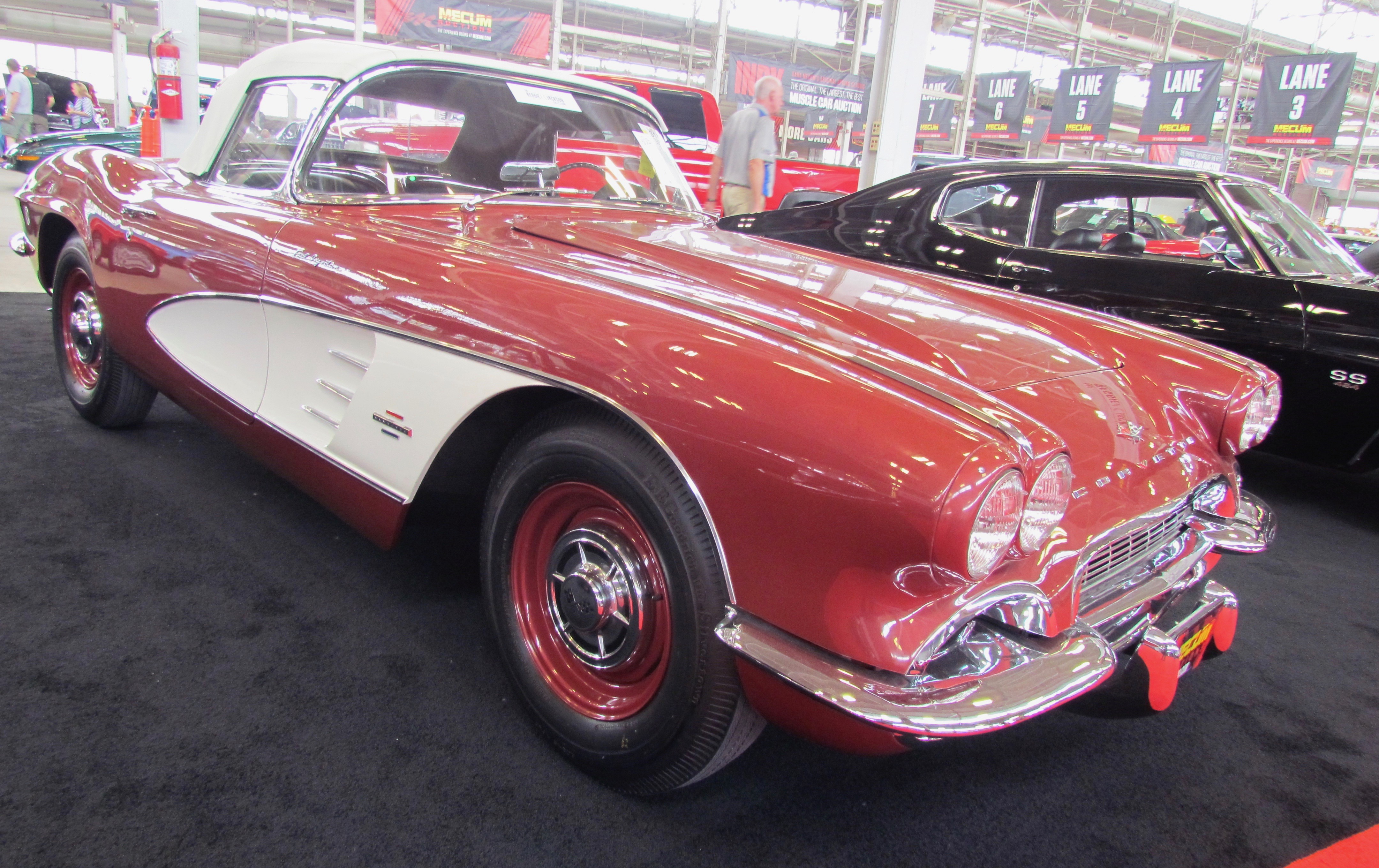 A couple of years ago I got to spend some time in the garage where Baseball Hall of Famer Reggie Jackson keeps most of his car collection. This ’61 Vette is one of the cars he’s selling at Mecum’s auction. It’s an award winner — Bloomington Gold, NCRS, Duntov Mark of Excellence — and with its matching-numbers 283cid V8 and 4-speed gearbox.

This roadster is part of the Richard Cohen Collection and among the first ‘Vettes equipped with a V8 powerplant. It’s also a multiple award winner, and very cool in its Harvest Gold with Green top and Yellow interior. 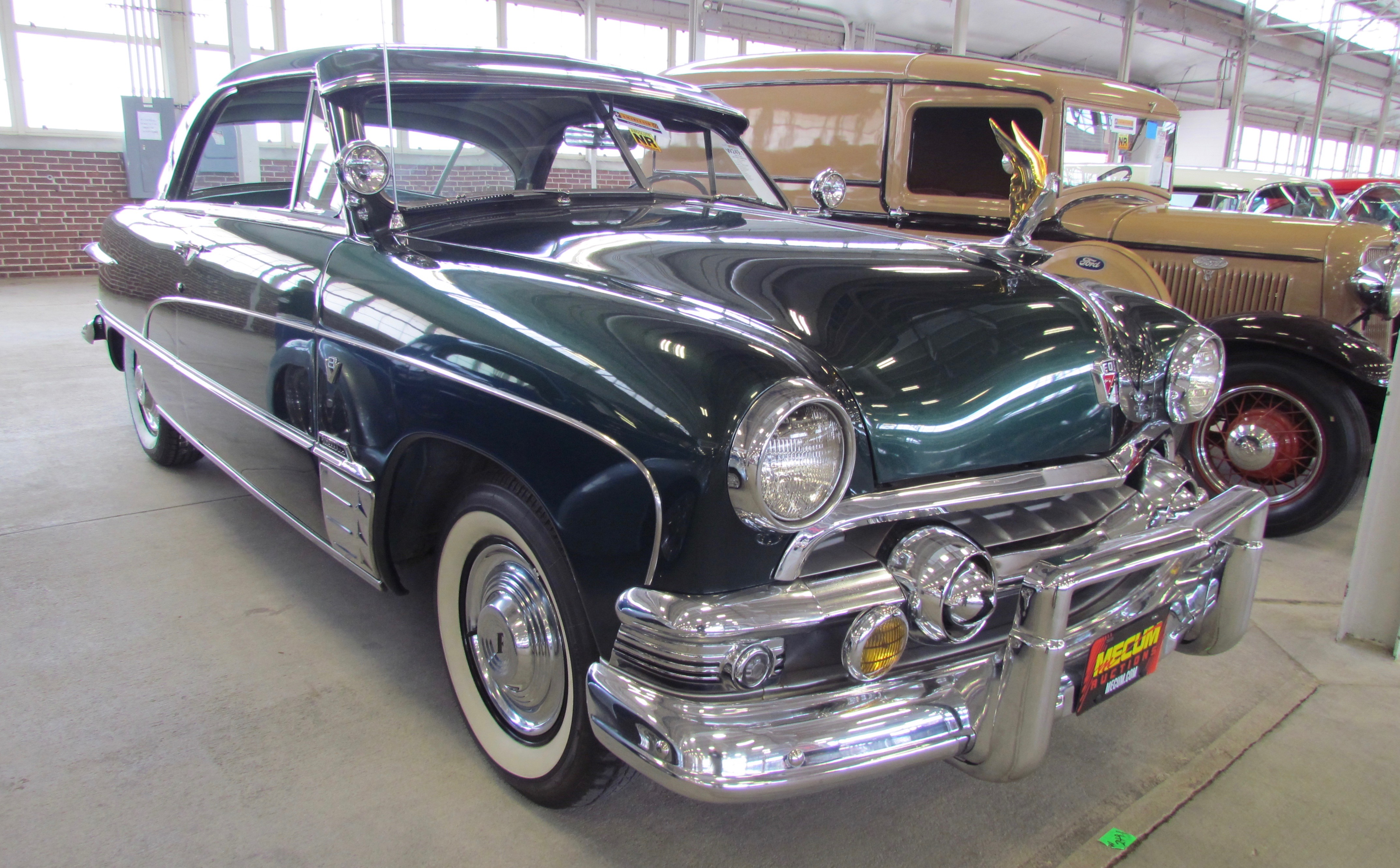 Unlike the Corvettes, this ’51 Ford Vickie is expected to sell for around $35,000, but looks sinister in its dark green shade, and especially with that two-tone hood ornament. 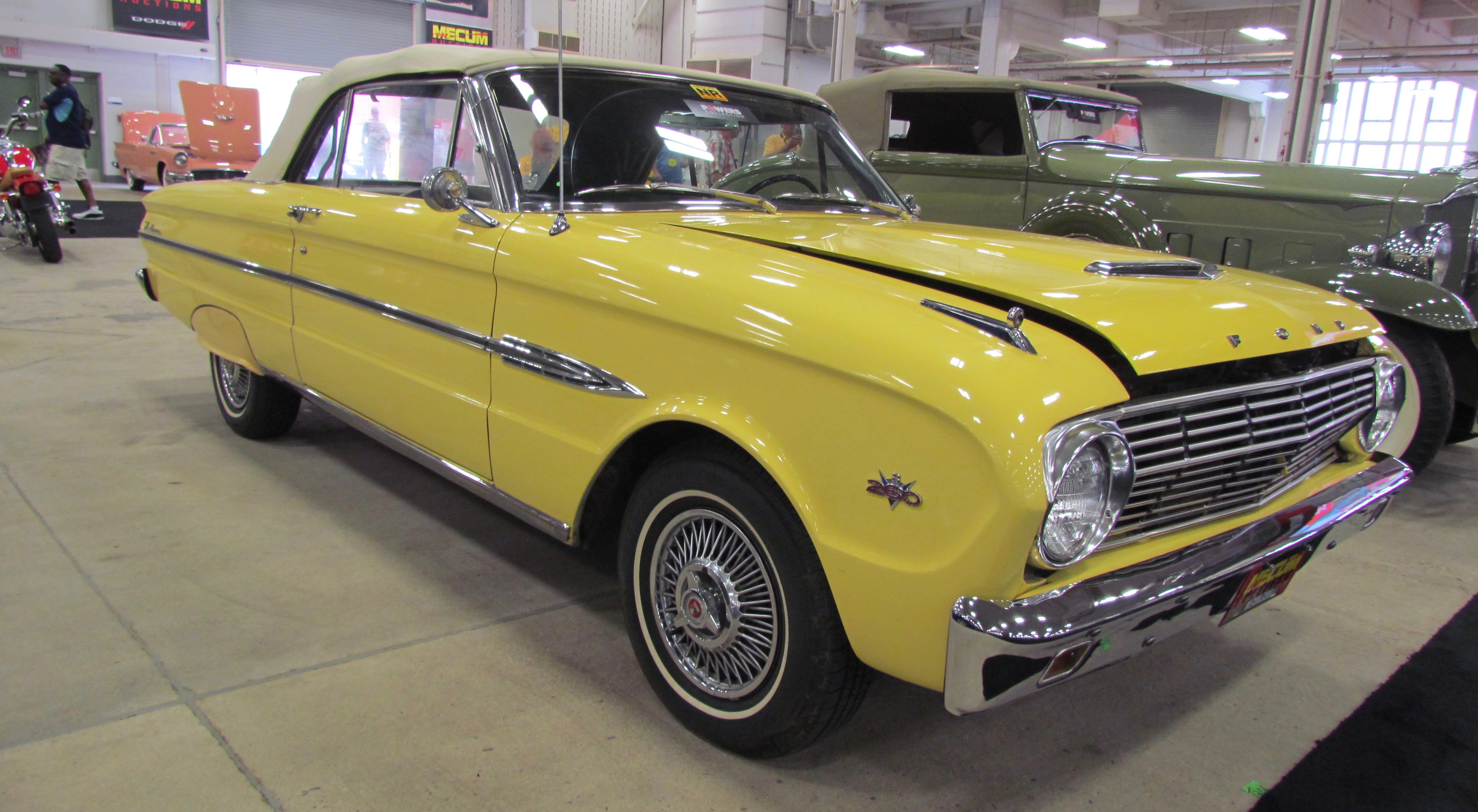 Reportedly the 37,000 miles on the odometer are all this little cabriolet has been driven. When I was in high school, my parents bought the next-generation Falcon convertible and I have fond memories of that car. Personally, though, I like this earlier body style more than the more squared-off car my parents bought.

In addition to cars, Mecum is handling Jim Street’s boat collection. When I worked in downtown Detroit, I often took my lunch over to Belle Isle, the island park in the river that flows between Detroit and Windsor, Ontario. This big wooden boat, believed to be the last surviving Super Bear Cat 32, looks like a great Great Lakes cruiser, and that 1,650cid Liberty WWI V12 engine figures to provide plenty of oomph. 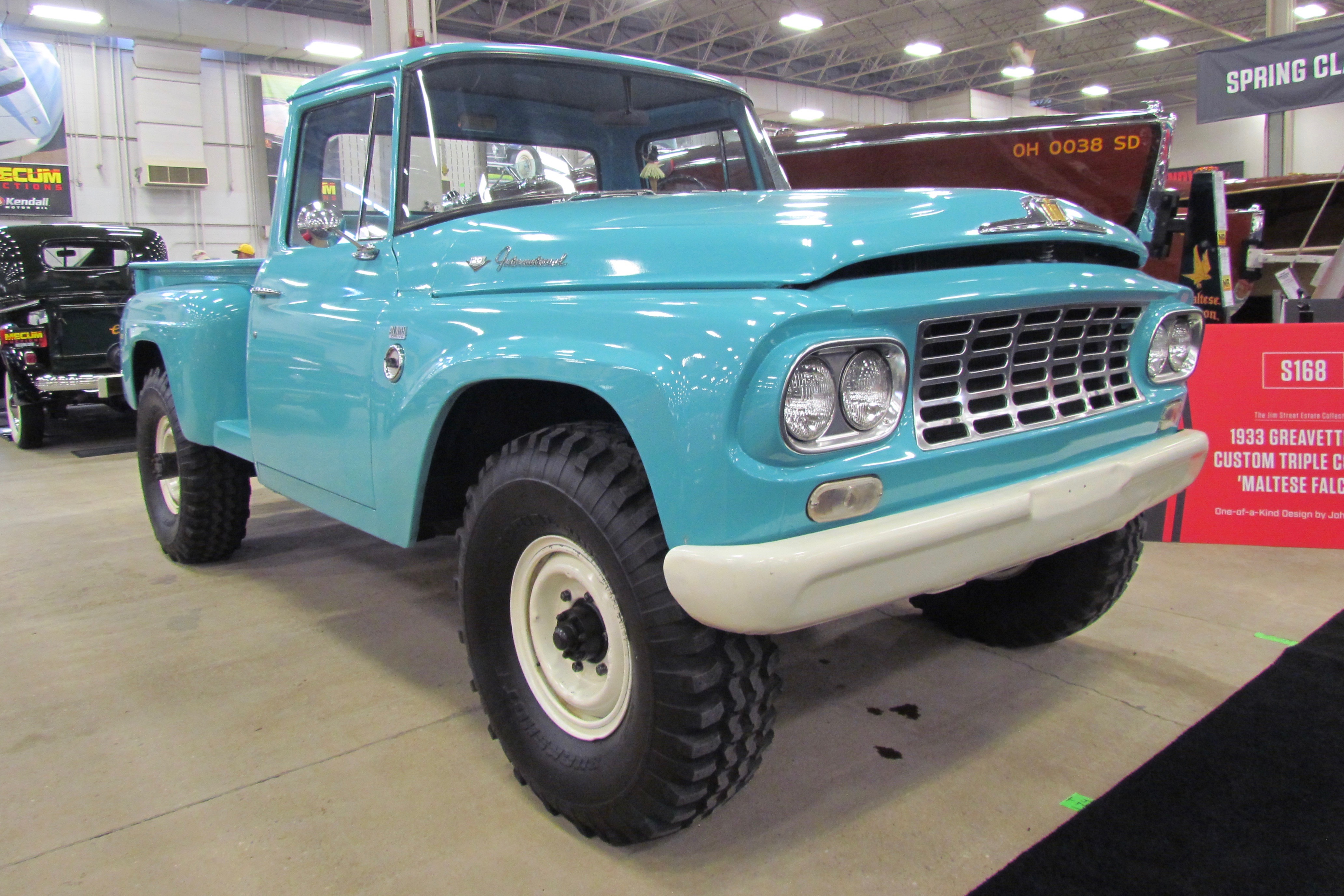 Driven only 45,000 miles since new, and still in original (unrestored) condition, this Turquoise beauty has factory-installed 4×4 drivetrain, heavy-duty transmission and transfer case. 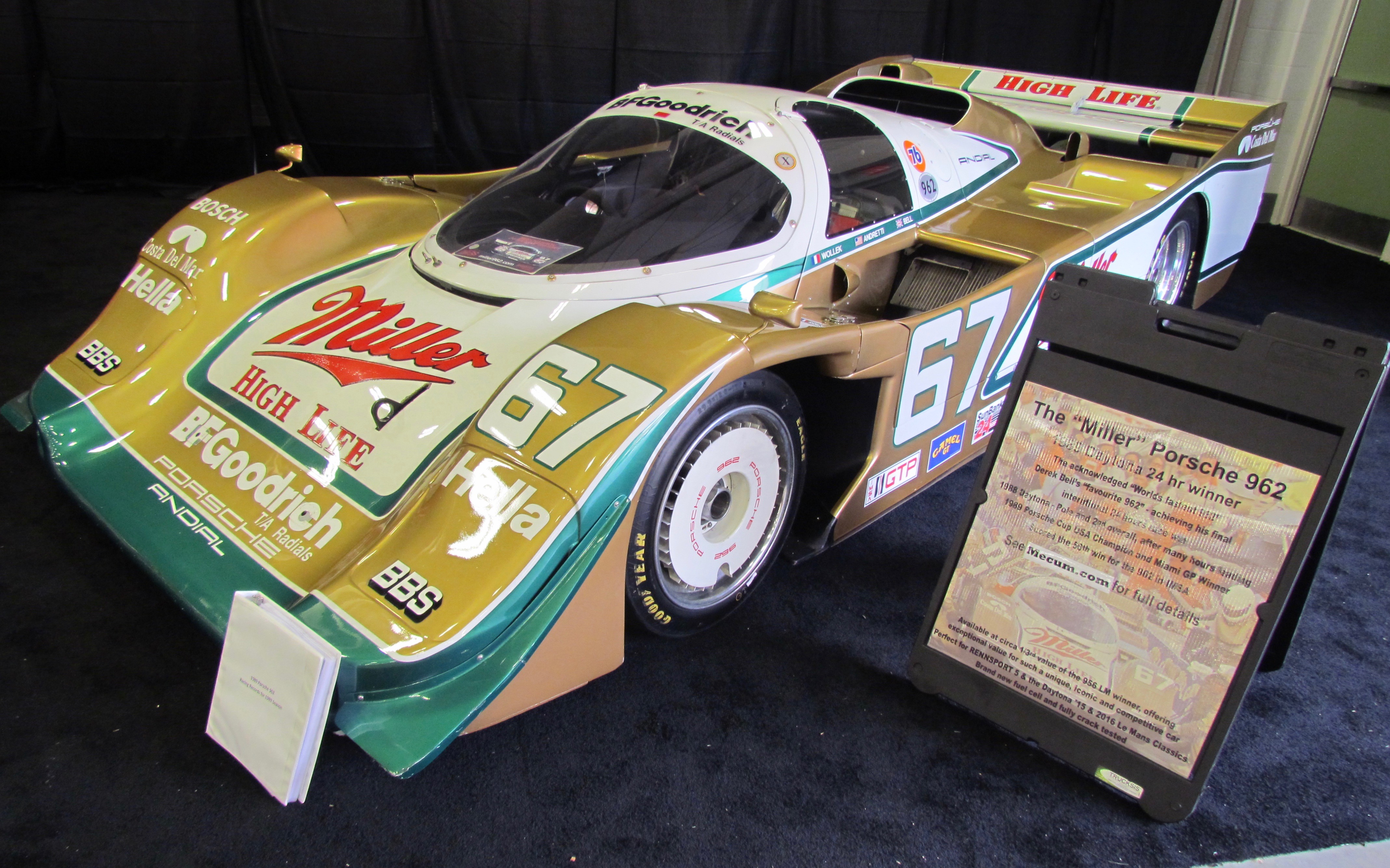 This is the car that Derek Bell, Bob Wolleck and John Andretti drove to victory in the 24 Hours of Daytona race. It was Bell’s third and last victory in that race, and the 50th victory overall for Porsche’s 962 model. But interest in this car involved Andretti — Aldo’s son, Mario’s nephew, Michael’s cousin — and my friend, who currently is battling colon cancer and reminding everyone he can that they need to get checked, and soon. 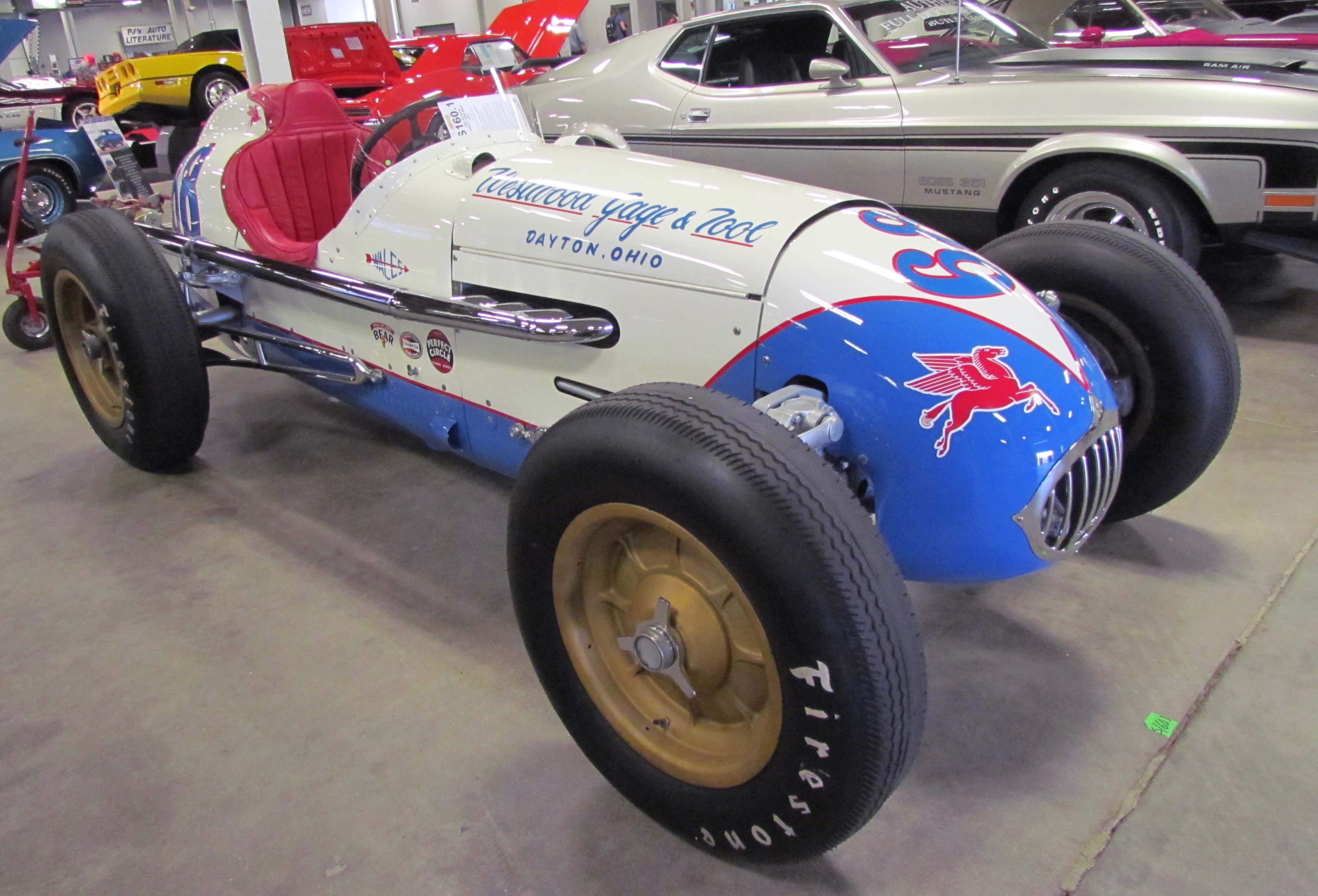 And not just any Indy car but the car driven at Indy by Ed Elisian, who stopped to try to help Bill Vukovich who crashed and died of his injuries. Shorty Templeman put this car on the poll at Phoenix in 1954 and it also was driven by Pat O’Connor and others.

The AMX was American Motors’ answer to Mr. Shelby’s Mustang, and back in the day some of us thought they were so much cooler as well as more sleek and stylish. Even more so in this Bayshore Blue color.

Back in the day, I thought this was one of the ugliest cars ever produced. But as I’ve aged, my tastes have changed and now I see the beauty in Virgil Exner’s design. I’ve actually scanned the ClassicCars.com classified ads to see if there might be one available. I need not be in the arena when this one rolls across the block. 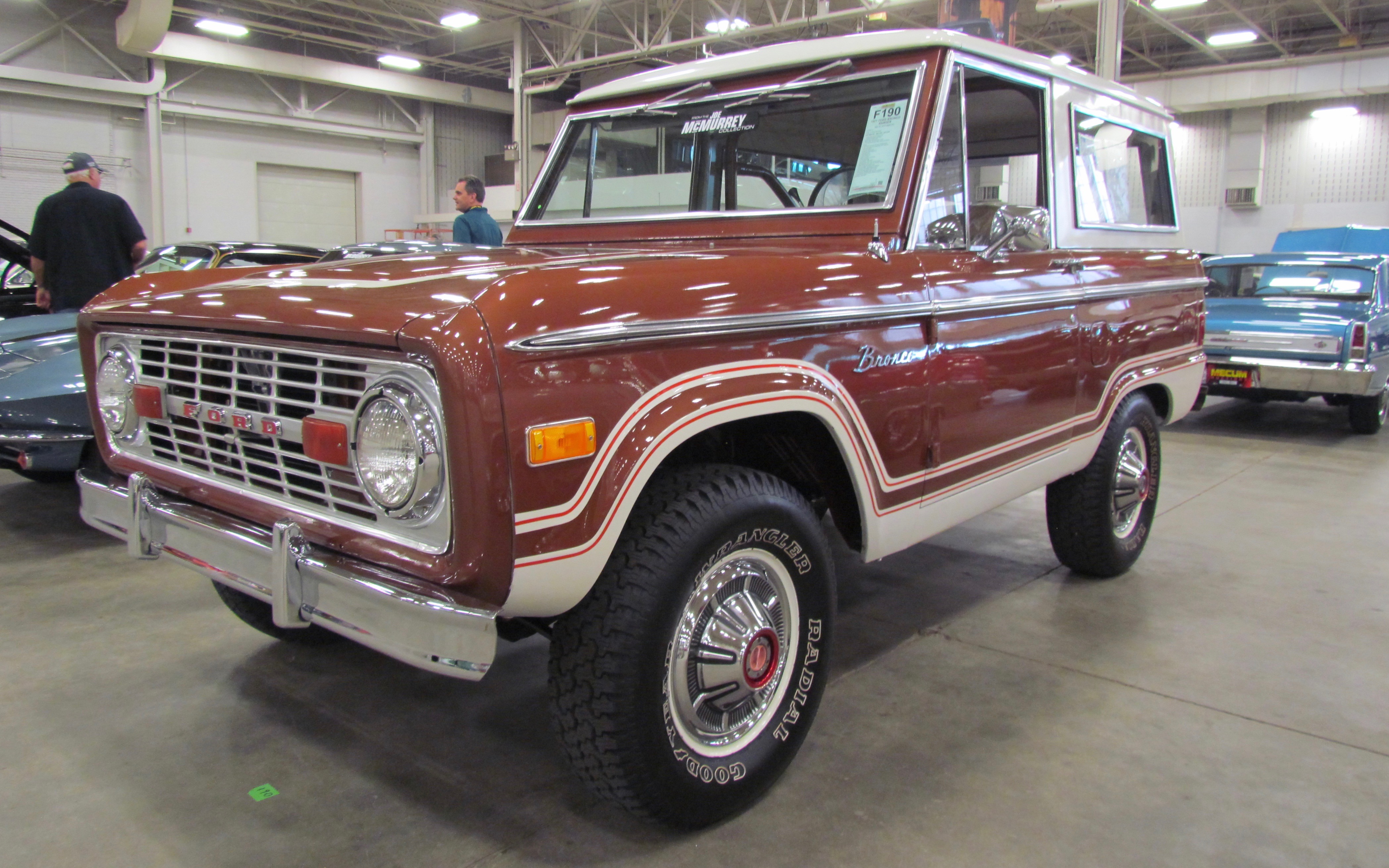 Ford soon will relaunch its Bronco and I think it would be very cool to have one of the originals, but so many of them have been significantly modified. This one has been restored, but to its factory appearance in two-tone Cinnamon and White colors with tan and houndstooth interior. There’s even a 302cid V8 under the hood to empower the 4×4 drivetrain.

Restored more than 20 years ago, this pre-WW2 British tourer would be a great way to shuttle the grandchildren to their sports and music lessons. 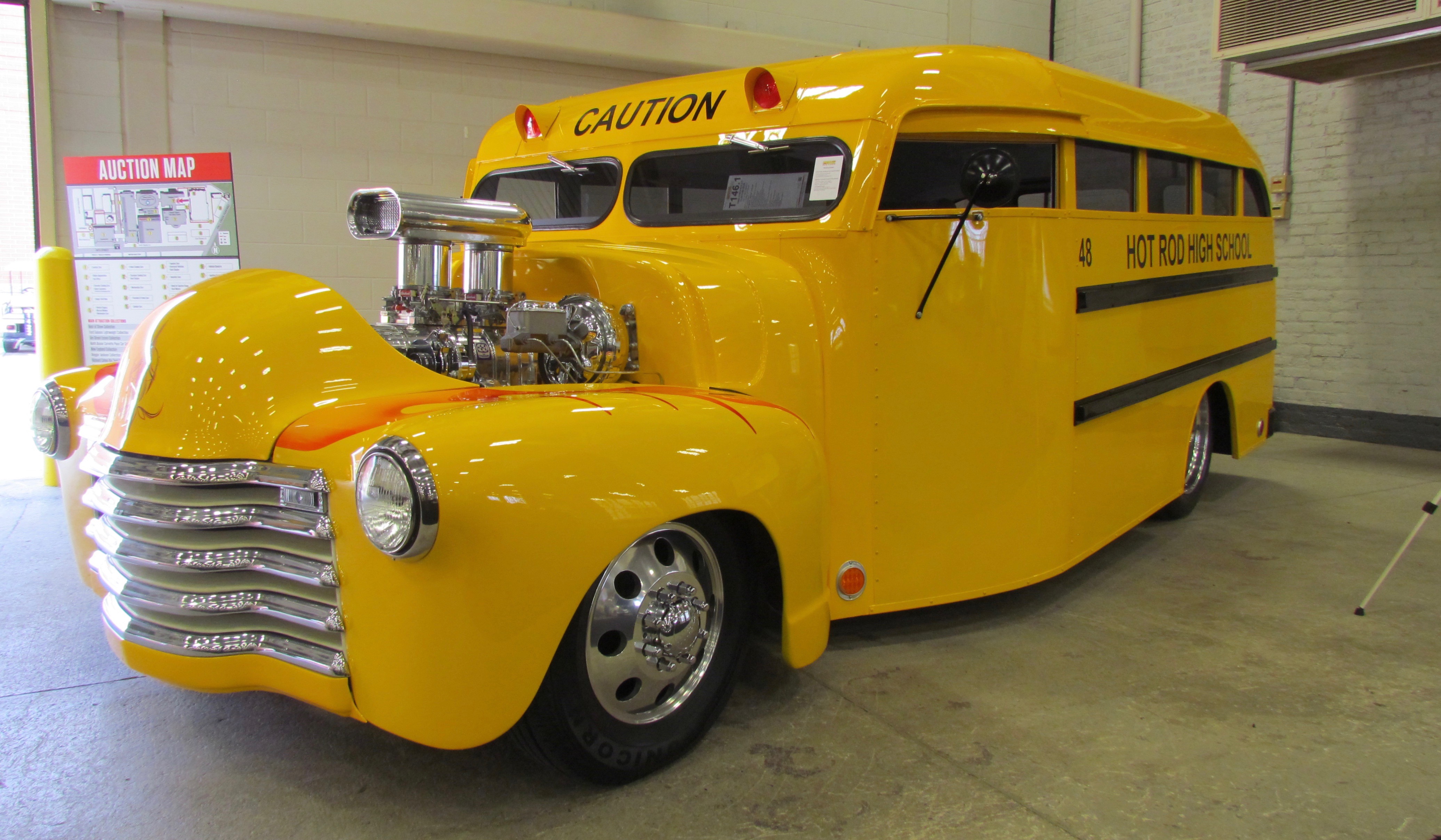 Knowing my grandchildren, I’m sure they’re prefer to be shuttled around in this hot-rodded former school bus, and with a supercharged 355cid V8 under its hood, it’s probably a blast to drive.

The ‘unloved’ cars and the outboard boat engines

Parked outside are seven rusty, crusty, heavily patinaed vehicles from the Jim Streets Estate Collection. At the far end is a 1958 Cadillac Eldorado with what’s left of its windshield apparently held together by plastic wrap. I’m sure each of these cars has a story. I hope someone discovers them. Streets also collected hundreds of vintage outboard boat engines; each of them is like a sculptural work of art.