It took almost 50 years and a build team of nine, but I once again am the proud owner of a 1940 Ford Deluxe coupe. I owned one back in high school and, though many years had passed, I never forgot how much I loved my first car.

It’s no surprise that when my childhood friend, Larry Seabert, owner of Tech-Ni-Kolor Autocrafters in Dwight, Illinois, found a 1940 Ford Deluxe coupe in a barn in 2007, his first thought was to call his friend and ask if he would like to have his old car back. 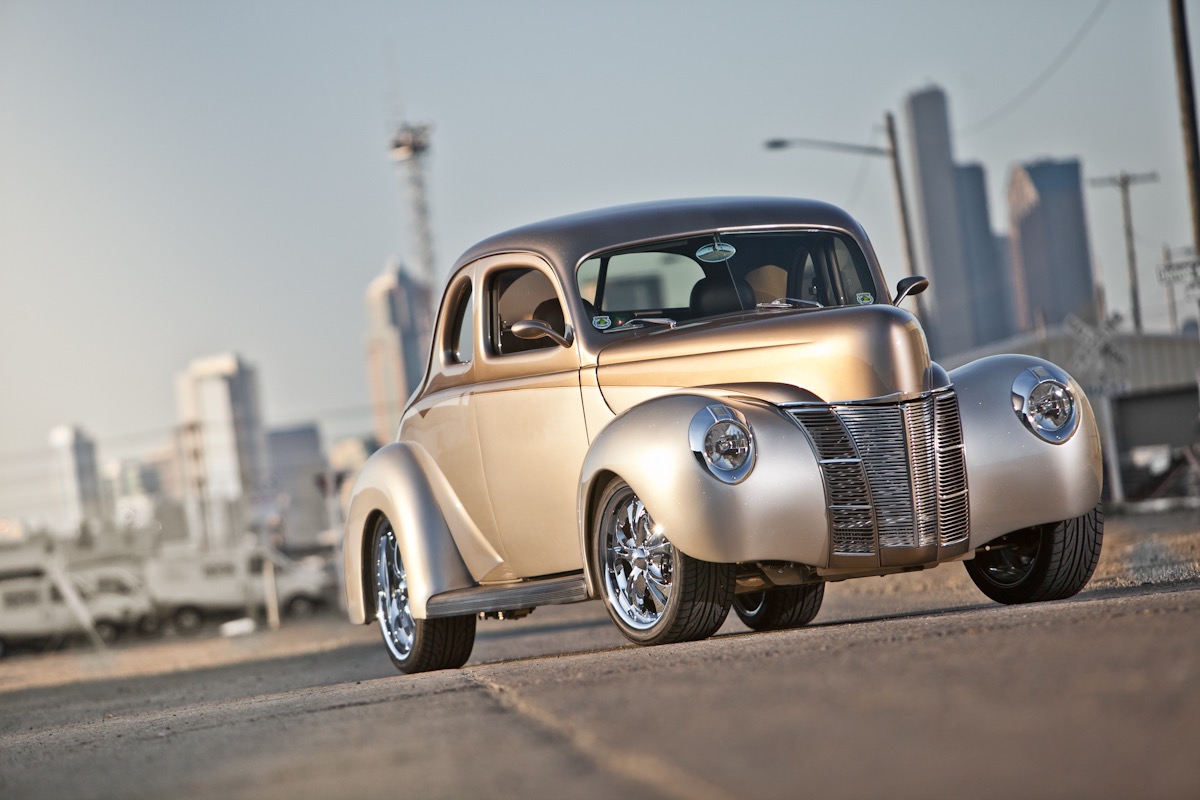 Of course, it wasn’t the exact car I had once owned. I had to sell my prized coupe a few years after high school to have enough cash to pay for schooling. However, the barn find looked identical, and I was eager to once again get behind the wheel of a 1940 Ford Deluxe coupe.

Seabert started to rebuild the car in June of 2007 and enlisted builders and fabricators from all over the country, as well as several members of my family, to help him. At the time, I was living in Dallas, but made many trips back to Dwight, Illinois, to visit family and the project car.

The build not only helped me reunite with a long-lost car, but also with friends and family I’d grown up with in Dwight.

There is a story behind every piece of this thing, and so many people are involved.

Although we wanted to recreate the look of the car I drove in high school, I also wanted to make some custom modifications and add modern features. The concept was to keep the look of the 1940 Ford Deluxe coupe but to build it to 2010 specifications for drivability and safety. We wanted it to be a show car but, at the same time, we wanted a car that could be driven: air conditioning, power seats, steering, brakes, power windows and, of course, an XM radio and Bluetooth.

The drivetrain was configured so that the car can be easily maintained with standard GM parts.

To make things more comfortable inside the car, adjustable Pontiac GTO bucket seats were added in place of the original front bench seat. Bucket seats were created to replace the car’s original back opera seats to better accommodate my young grandsons.

Classic Instruments supplied the gauges, which were set in a template by DC Street Rods. Classic also reworked the car’s original clock so that it’s now electric. It originally needed to be wound every 36 hours.

A reworked LS1 engine from a 2002 Corvette sits under the hood, along with an 4LE60 automatic transmission, a TruTrac serpentine system from Billet Specialties and loads of stainless and polished aluminum.

The car also underwent significant body modifications, such as the extension of the back fenders to allow the exhaust pipes to come through the body. The door hinges were hidden and the side trim removed.

Despite the modifications, I did want to retain many of the car’s classic features so that it could easily be identified as a 1940 Ford. We chose to reuse parts such as the rearview mirror and to utilize a column gear shift.

It took nearly four years to complete the project, but 50 years later, I have my car back. It was worth the wait.