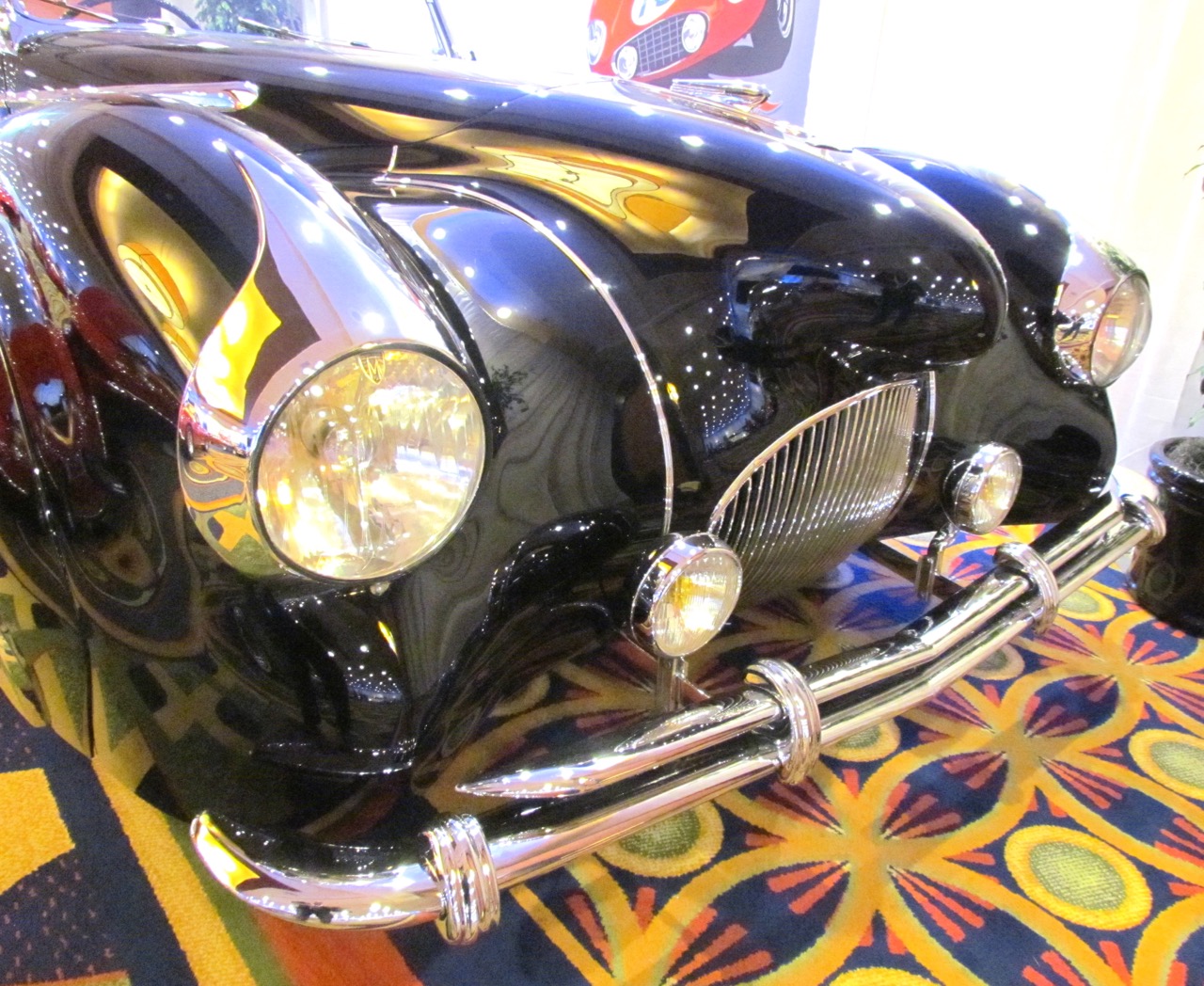 What a difference walking into the salon-like setting of the Rick Cole collector car auction in Monterey. For one thing, there’s no auctioneer’s block or phone bank on the brightly carpeted second floor of the downtown Marriott Monterey hotel. Nor are there any glossy-paper auction catalogs with lush photography and extensive vehicle descriptions.

Instead, there are Rick Cole and a couple of others vehicle experts who will answer questions you might have about the stunning vehicles being offered up for bidding. Need to know a car’s specs or historical provenance in detail? It’s on the Rick Cole Auctions website.

Even the bidding is different, which explains the absence of the auction block. Starting this morning, you simply take your smartphone and place your bid — from anywhere in the world, including from any of the other auctions or events taking place here on the Monterey Peninsula this week.

Cole staged the first collector car auctions on the Monterey Peninsula. That was back in 1986. It wasn’t too long before other auctions jumped onto the Monterey Classic Car Week bandwagon. This year, there are six such events taking place and offering varying levels of auction action and showmanship.

Cole eventually sold his auction and focused on other pursuits, but last year he returned, though with a very different auction format: Come and see the cars at your leisure and then place your bids by smartphone. Bidding ends at midnight Sunday and winners will be announced the following day.

I had a sneak peak of the cars Wednesday. Here are those that spun my tach toward redline:

Nicknamed the Narval, after its Narwhal-style nose, this is one of only seven such cars built with Figoni et Falaschi coachwork. The car was sold new in the U.S. and was used in the Prima Shoe Company’s “Cover Girl” advertising campaign. Delahaye dates to 1845 but the Type 135, introduced at the 1935 Paris Salon, marked the company’s pinnacle. Jean Francois designed the chassis, which was used extensively for Grand Prix racing and also was covered by some of the most exotic body panels of the Art Decco era, including those created by the likes of Saoutchik, Pourtout and, of course, Figonie et Falaschi. The Narval debuted at the first post-war Paris Salon in 1946. French singer Charles Trenet took his Narval on an American tour in 1948. Prince Ali Salman Aga Khan bought another for his wife, actress Rita Hayworth. The car being offered at Cole’s auction was purchased new by Prima shoe company president Mark Deitsch. It was rediscovered in the possession of Eric Traber in Switzerland in the late 1970s or early ‘80s. Purchased by R.L. Atwell of Fredericksburg, Texas, the body was mated to an Antern-bodied Delahaye and restoration was done by Craig Jackson (yes, as in Barrett-Jackson auctions), whose father, Russ Jackson, had purchased the cars from Atwell in the 1980s. The car was part of a museum collection until being sold in 2013.

This is one of four Maserati “works team” racing cars of the era and was driven by Stirling Moss (with Denis Jenkinson) as well as by Juan Manual Fangio and others in events including the Mille Miglia, Nurburgring 1000, Cuban Grand Prix and perhaps the 24 Hours of Le Mans. This car, chassis 4505, made its debut with Moss and Jenkinson aboard in the 1957 Mile Miglia. They qualified fastest, but retired after only 10 miles when the brake pedal sheared off. “The history of the Tipo 54 cars becomes somewhat unclear from this point,” Cole’s website catalog admits, because of Maserati’s “not uncommon practice during the era to navigate around import duties between races and to deal with inevitable crashes, race damage, and repair times. Consequently, the chassis numbers of various cars were swapped from damaged or unavailable cars to race-ready cars as required for their all-important carnet.” Several racing historians are convinced 4505 is the car that Jean Behre and Andre Simon drove at Le Mans in 1957.

This stunning car was originally sold through Luigi Chinetti to John Mecum Jr., oilman and racing-team and New Orlean Saints football team founding owner, who had the front of the car modified with an angular, split radiator grille and covered single headlamps, making this a one-of-a-kind design ahead of the car’s V12 engine. According to the online catalog, Mecum sold the car in 1969 and it later was sold to Richard Kitzinger, who showed it at Ferrari Club of American events and then put the car, showing 43,555 miles on its odometer, into storage until 2007. The next owner had the car restored by Ferrari of Washington in Sterling, Virginia. It is being sold with 43,653 miles showing.

This is one of 563 ’62 T5 Drauz roadsters and comes from the collection of Theodore Gildred, who was appointed American ambassador to Argentina in 1986. The Porsche has been driven only 2,000 miles since undergoing restoration 25 years ago. Car 88316 has a Porsche Certificate of Authenticity and is an original, top-specification 1600S. Although not original to the car, the engine is a period-correct 1961 “Super” unit numbered P87462. The car’s true mileage since new is reported to be just less than 100,000. The wheels are from the Brazilian aftermarket and are 4 inches wide.

Also from the Gildred collection comes this 1953 Hudson Hornet convertible, one of only 51 known and in 2013 a best-in-class winner at the La Jolla concours d’elegance. The car was restored in 2009 by Russ Maas, who specializes in “step-down” Hudsons. Equipped with what the Cole catalog notes were “upgarded competiton-specification parts, cryptically designated as “Export” parts,” Hudson Hornets dominated stock car racing in their day with their “Twin H-Power” dual-carb intake and became widely known as the “Fabulous Hudson Hornets.” Of 27,208 Hornets produced in 1953, only 240 were convertibles and only 51 are known to still exist.

Of 698 such cars built, it is believed that only 50 remain from 1950, the final year of such hand-made, white ash-timed cars and the only year such trim was placed on a Chrysler coupe, the new-for-’50 Newport model. Wood-trimmed Town & Country Chryslers were introduced in 1941 but production was halted during the war. They returned in 1946 in convertible and sedan form. The wood-trimmed Newport was the most expensive American car of its day, priced from $4,003. Owners included thelikes of Gary Cooper and Rita Hayworth. Empowering the car is an inline 8-cylinder engine introduced in 1931 and last used in the 1950 model year. The Newport being offered at the Cole sale was part of a private museum’s collection and retains its original wood trim.

Mercedes restoration specialist Rudi Konicek of Victoria, British Columbia, acquired this car from a Japanese collection and brought it back to its original, factory disc-brake configuration with color-matching fitted luggage and tool roll. The restoration included the hard top and aircraft-style lap belts. The car was one of 244 300 SL roadsters for 1962 and retains its factory-installed, inline six-cylindcer engine, though no longer wears its original Fantasy Yellow paint.