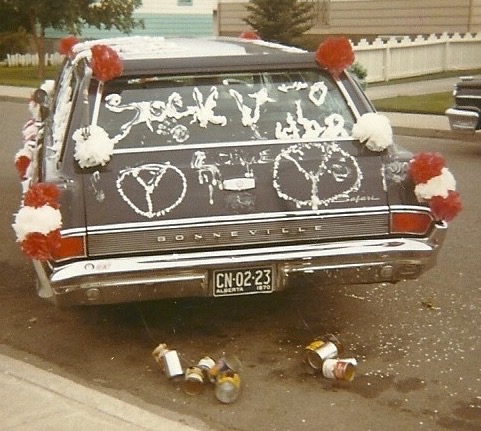 I was a lonely person because I worked all the time at Mohawk Auto Square in Calgary, Alberta Canada. Changing tires and oil. Having just graduated from St. Francis High School, I had no idea where I was headed and needed gas money for my car my dad had bought me. It was a 1959 Purple Lavender Lilac Pontiac Parisienne (couldn’t even spell this at the time) and spell check says its parishioner or prisoner now.

I did get the gas to drive around and on Labor Day weekend 1964, 50 years ago, I was driving around and noticed a girl (Annette) from my old school and stopped and talked to her. Her friend (Lila) was there also and I asked them if they wanted a ride. To the home of the girl I knew we went but it was her friend that sent me into dreamland.

Now with an excuse to follow up, I drove my Pontiac to the girl I knew from school to connect me with the girl I wanted to know.

Six years later, I was married to the girl I wanted to know, but had sold the Pontiac and was driving a 1965 Pontiac Bonneville wagon.

Ahh, the Purple Pontiac 2-door hard top, it was a V8 but the V8 was blown in Vancouver, Canada, and replaced with a 6-cylinder. This is why my father bought it, thinking that slower and less powerful and was what he needed for me.

The condition was impeccable as new, with big whitewall tires it stood out and no one had or have I ever seen another in this color.

The back seat had clear super thick plastic covering it, a fad of keeping the seats nice and clean in those years.

The steering column had scratches from the keys wiggling so I took everything apart and had it chromed.

On one of my drives with Lila, my future wife, I lost a hub cap and with limited funds to get a new one I searched dearly and found it.

The shortest ownership was a Buick wagon that I bought at one dealership and sold or traded in the same day at the next dealership just down the street.

Yes, the most important thing in my life was my Wife and my Cars.