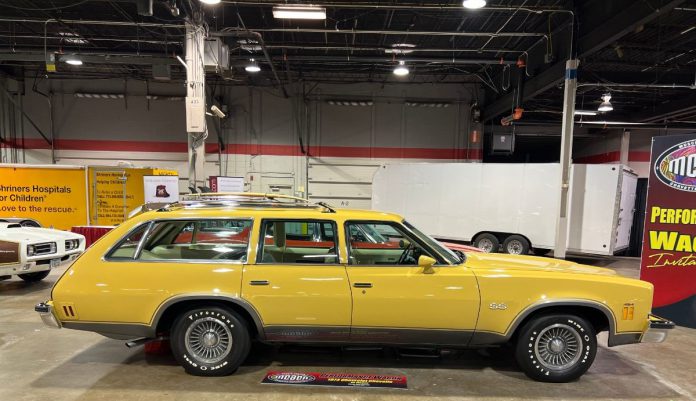 There are certain purists who will only concede a muscle car has to be a mid-size vehicle, but then is a large Chevy with a 409 not a muscle car? What about a rare wagon with a big-block four-speed? Maybe the latter is taking liberties, but wouldn’t you welcome it to a muscle car show?

Thus, the Big Body Muscle Invitational and Performance Wagon Invitational displays at the Muscle Car and Corvette Nationals (MCACN) this past November. The promoters brought some very interesting vehicles that generally are off people’s radars because seeing the same, old same-old is not what MCACN is about.

Special mention goes to two interesting cars that were not able to attend due to inclement weather: a 1964 Buick Wildcat with a Super Wildcat 425/four-speed combination, and a 1968 Pontiac Catalina two-door sedan with a 428 HO four-speed. Ever see one of those? Maybe next year but, for now, here’s what was in attendance.

Out of all the manufacturers in the 1960s, Ford was the first one to cross the 400-horsepower threshold with the 1961 tri-carb 390. Unfortunately, the only transmission available was a column-mounted three-speed, though it is said a dealer-installed four-speed was available later in the year. This is a Galaxie Sunliner.

This elegant 1961 Pontiac is a Ventura, basically a Catalina that featured a fancier interior — “true luxury at moderate cost,” said the brochure. Featuring 8-lug wheels and a 318-horsepower Tri-Power 389, this vehicle is the quintessential early muscle car …

… unless you’re a Chevy guy, as the 409 was king of the street and AM radio. Truth be told, buyers preferred the Impala Super Sport while collectors prefer the Bel Air “bubbletop,” but smart racers went with the lightest and cheapest mode available, which would mean this 1962 Biscayne with a 409 and four-speed. This 409 features a single four-barrel, which means it’s the 380-horse 409.

In 1965, Pontiac upgraded the 2+2 package from a sporty trim option for the Catalina to an honest-to-goodness performance model that came standard with a 421. However, that doesn’t mean one couldn’t opt for a 338-horsepower 421 four-barrel and a four-speed in a regular Catalina convertible.

Oldsmobile redesigned its full-size series in 1965, with the personal-luxury Starfire receiving special sporty styling features including distinctive taillights and novel side-exist exhaust. All were powered by an all-new 370-horsepower 425. Most came with GM’s new TH400 automatic, but 122 were built with a four-speed — how many of those were convertibles is anyone’s guess.

Pontiac introduced the Catalina-based Grand Prix coupe in 1962, creating an egalitarian personal-luxury model the likes which had yet to be seen (the Thunderbird and Starfire were much more expensive). However, by 1967, the Grand Prix had become paunchy, though it continued to offer distinction from other full-size Pontiacs as evidenced by its hidden headlights and concave backlite. This one features a 428 four-speed.

By 1970, Hurst Performance worked with Chrysler Corporation to produce around 500 Chrysler 300-Hurst two-door hardtops (and at least two convertible promotional vehicles). All came from the factory with the 375-horsepower 440 TNT V8 and feature Spinnaker White paint with gold highlights and brown and orange stripes. The tan upholstery was borrowed from the Imperial LeBaron.

Next to the 300-Hurst is a 1971 Chrysler New Yorker, which is the furthest thing from a performance (or even a sporty) car. However, this one was built with the TNT 440, which is about as fast as it got for big cars in 1971.

Legend says that a Chrysler Corporation executive overheard a conversation about General Motors downsizing its cars. It was a misunderstanding that led to compromised 1962 models though, in retrospect, they were perfectly sized. For 1963, Chrysler worked on damage control and lengthened the Plymouth to be more appropriate for market demands. This 1963 Belvedere wagon features a 330-horsepower 383.

For 1964, it looked like things were back to normal for Plymouth, though its full-size series was still smaller than the competition’s. Big news was the introduction of the 426-S, commonly known as the 365-horsepower “Street Wedge.” This unrestored Savoy is one of the few to have this engine.

This 1965 Chevrolet Biscayne wagon features the 325-horsepower 396, so it’s properly equipped for hauling duties. The original buyer selected the M20 four-speed manual transmission, making it one of a handful built.

This 1968 Tempest Safari wagon with a 1969 GTO nose has been a drag car since new. For you enthusiasts, you can find a feature on it in an issue of Popular Hot Rodding magazine from the 1970s.

This original-paint 1972 Oldsmobile Vista Cruiser features 455 power and some mild modifications. Though perhaps not as performance-oriented as other wagons in this display, the owner has demonstrated its prowess in the Hot Rod magazine’s Power Tour.

Not many people are aware that when Chevrolet redesigned the Chevelle for 1973, the product planners also expanded Super Sport availability to the station wagon. No numbers exist how many were built, but chances are most had the 350 and not the 454 like this one.

Click here to view more coverage from the Muscle Car and Corvette Nationals 2022!