Charger 500 and Daytona, and Plymouth Superbird were out in force 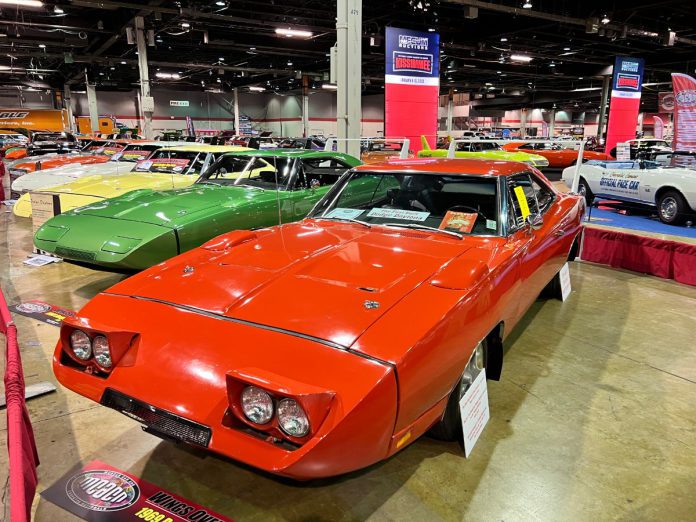 The Muscle Car and Corvette Nationals 2022 featured two displays paying homage to Chrysler’s NASCAR homologation specials: Wings Over America and the Wellborn Aero Warriors Invitational. The homologation rules for NASCAR required the production of 500 units for 1969, and the rules for 1970 were changed to one example per two dealerships. As such, 580 Dodge Charger 500, 503 Dodge Charger Daytonas and almost 2000 Plymouth Road Runner Superbirds were built.

The 1969 Charger 500 was based on the R/T model and therefore came standard with a 375-horsepower 440 Magnum, with the 426 Hemi as an option. The major modifications made by contractor Creative Industries were a flush grille (via one borrowed from a 1968 Coronet) and the backlite’s flying buttresses smoothed out for a flush rear window. The 1969 Charger Daytona improved on that formula by adding a more aerodynamic nose cone and a tall spoiler. The 1970 Superbird tweaked what worked on the Daytona, but workers at Chrysler’s Clairpointe pre-production facility added a vinyl roof to street cars to hide the rough work done to the roof, rather than spend the time to smooth out the sheetmetal. Standard engine was a 440 Super Commando, the same 375-horse engine standard on the Charger R/T, but now the 440 Six-Barrel was available in addition to the 426 Hemi.

Enjoy the pics of Mopar aero cars in every configuration and condition. Which one is your favorite?

Travis Pastrana looks to qualify for Daytona 500 with 23XI Racing