The Vision Gran Turismo will be available for GT7 players 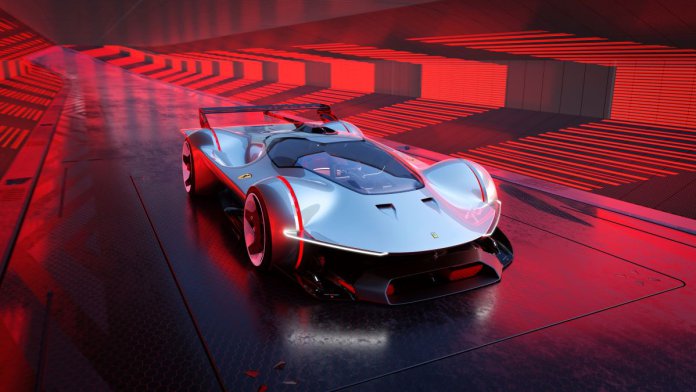 Being middle-class is no fun! Can’t take three-week trips to Europe. Can’t build an arcade with the best from Atari, Bally-Midway and others. Can’t afford weekly visits to Ruth’s Chris. Can’t afford a Ferrari (or a $5000 oil change).

But now there is hope for those of us in the trenches as Ferrari has created its first virtual concept car. Yes, Enzo has gone egalitarian! The Ferrari Vision Gran Turismo is Maranello’s first concept car designed specifically for the Gran Turismo 7 (GT7) video game available for the Sony PlayStation 4 and PlayStation 5.

Certainly you can afford a PlayStation, right?

And you own it, Man! How cool is that?

According to Ferrari, the Vision Gran Turismo’s design “was conceived around the idea of a speed form with very geometric, sharp, angular lines that nevertheless underlie a very organic shape. This contrast has a disruptive effect, as the plasticity of the external and internal surfaces binds with the geometric precision of the lines,” resulting in the patenting of two unique side channels that direct airflow from the front underbody and around the cockpit to over the channels. The result is aerodynamic downforce due to momentum and suction. Also up front is an S-duct and associated vents on the wheel arches for more aero sleekness and stability. Out back, the diffuser and wing are inspired by the Ferrari 499P.

Powering the Vision Gran Turismo is the same 120-degree 3.0-liter V6 that powers the 499P, though in this car it’s tuned to deliver about 1000 horsepower at 9000 rpm plus an additional 240kW from three electric motors — one on the rear axle and two others on each of the front wheels. According to Ferrari, this hybrid technology “benefits from the unique expertise in electric boost and energy recovery strategies Ferrari has developed in Formula 1 … so that maximum performance is available both during qualifying laps as well as over consecutive racing laps.”

The construction of the Ferrari features a carbon-fiber underbody that ties together the body and suspension. “The chassis is designed to emphasize e car’s lateral dynamics in on-the-limit handling,” with an elasto-kinematic suspension set-up that was developed in concert with the racing tires to achieve a balance between winding city circuits and endurance racing.