A road trip to Wichita for the National Acura Legend Meet 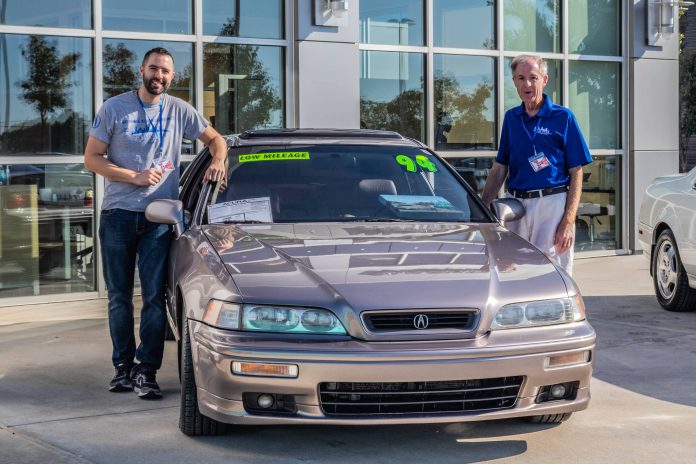 Legends never die, at least according to an enthusiastic group of Acura enthusiasts.

Having now completed its 17th year, the National Acura Legend Meet (NALM) has spanned the country from east to west, and north to south, with its annual gathering. This year’s event took place in a location nearly dead-center in the lower 48 states: Wichita, Kansas. Attendees came in about 20 Legends from 11 states to participate.

Dating back to 1986, the Legend model debuted along with the compact Integra hatchback when the Acura Division was created as a performance and luxury arm of American Honda. The Legend occupied the flagship spot in the Acura hierarchy for ten years, selling over 400,000 units in the United States and being offered in two distinct generations. While other Japanese luxury manufacturers opted for rear-wheel drive V8 powertrains as seen in the Infiniti Q45 and the Lexus LS400, the Legend leveraged a front-wheel drive V6.

The Legend model was erased from the Acura lineup in North America after 1995, when it was replaced by the more sedate 3.5RL. Still, the model held its ground in the enthusiast arena as communities on internet forums, Facebook, and later Instagram fostered a venue for collaboration and togetherness. Today, one of those Facebook groups holds more than 7,000 members.

The first National Acura Legend Meet was launched in 2005 in Dallas via the efforts of one individual who came up with the idea and volunteered to host an event. The rest, as they say, is history. Save for 2020, when NALM took a hiatus, the event has carried on each year in sequence. It is now driven by a team of advisors who review bids from prospective host cities and work with local teams to plan and host a successful multi-day event.

While Wichita does not have the sex appeal of Las Vegas or the tourism allure of a Florida beach, it does offer a convenient central geographic location and attracted several NALM first-time attendees. I was among a large number of repeat enthusiasts, having attended all 17 events over the years. I made the trek from Arizona in my trusty now-584,000-mile 1994 Legend LS coupe 6-speed.

Among the attractions this year were a visit to such recognizable monuments as Keeper of the Plains, a 44-foot-tall sculpture which stands at the confluence of the Arkansas and Little Arkansas rivers and recognizes the area’s indigenous inhabitants and their heritage. A visit to NuWAY Burgers that day introduced NALM members to famous “crumbly” hamburger patties along with homemade root beer.

The following day, the lineup of Legends headed north to Omega Auto Clinic, home to David Long, better known as the “Car Wizard” with a YouTube channel under the same name. A surprise visitor showed up at the same time – none other than Tyler Hoover of Hoovies Garage, a well-known personality for his YouTube presence as well (now at 1.4 million subscribers at the time of this writing). The last stop for the day was the town of Lindsborg, which Kansas calls its Little Sweden. NALM arrived just in time to catch the Smoky Mountain High School Homecoming parade. Local residents asked if we were part of the parade. We wished!

NALM 2022 capped off on Saturday September 17th at the Walser Acura dealership, which rolled out the red carpet and opened its showroom doors for the group. Five lucky Legend owners got to park their vehicles inside the showroom, and Walser served up BBQ lunch for the group as well as for any of its local customers who wanted to stop by. Just a few miles away, the world’s first Pizza Hut (established in 1958) welcomed NALM folks that afternoon at the Wichita State campus, and the car show peer-judging was held nearby.

Awards this year were distributed in multiple categories, and Best of Show went to Event Director Tom DeBerry for his immaculate 39,000-mile 1991 Legend L coupe in Golden Glow Pearl. A pizza party and parts raffle finished off the evening before participants got their final night of rest at the Hampton Inn host hotel.

My own 2,496-mile round trip was an adventure to remember, and I look forward to seeing where the NALM event goes in 2023 and beyond. With such strong momentum, no doubt the Legend meet will continue to grow and thrive – not to mention enjoy the notoriety of now being part of a “classic” car community as the model ages gracefully.