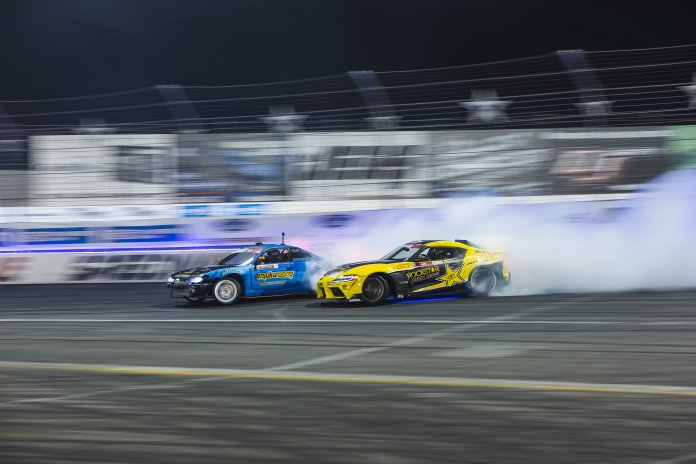 Formula DRIFT made a bold move and adjusted its 2020 competition season into a Covid-compressed calendar of four doubleheader events.  As a result, competitors had to adjust their strategies.

The season ended this past weekend with Vaughn Gittin Jr. winning the 2020 Formula DRIFT PRO championship and with Dmitriy Brutskiy taking the PRO2 title at California’s Irwindale Speedway, aka The House of Drift.

The Formula DRIFT Type S Title Fight Weekend was brilliantly lit with LED lighting along the track barriers and under each car.  Even without fans in the stands, the energy of the event was obvious and the pressure on the competitors and their teams was apparent.

Heading into the final round of the PRO2 Championship, Jonathan Hurst in his Cash Racing/Achilles Radial Infiniti G37as was the overall points leader with Brutskiy in his Essa Motorsport/Never Settle/Achilles Radial BMW M3 in second place with rookie Joshua Love in his After Hours Autosports BMW E36 third.

But there was contact in the second run between Brutskiy and Schmidt. Brutskiy was deemed to be at fault and was eliminated. However, rookie Nick Noback beat Hurst in their pairing and that secured the championship for Brutskiy.

In the PRO final — rounds 7 and 8 of the season — several drivers fell victim to the Speedways walls and also to mechanical gremlins with four engine failures in the early duels.

Second-place Ryan Tuerck had to replace the engine in his Gumout/Nitto Tire/Mobil 1 Toyota Corolla between the Top 32 and Top 16 stages while his fellow Papadakis Racing teammate Fredric Aasbo replaced the engine in his Rockstar Energy Drink/Nitto Tire GR Supra three times after it blew during a celebratory burnout after his round seven win on Friday.

Round 7 ended with Aasbo beating Michael Essa in his wounded FCP Euro/LiquiMoly/Achilles Tires BMW M3, ailing from a coolant leak, failing head gasket, misfire and more.  That put Aasbo in first place for the round, with Essa second with Chelsea Denofa third.

Round eight featured an intense fight between Ford Mustang drivers Denofa (on Nitto tires) and Justin Pawlak (on Falkens) that ended in a victory that moved Bakchis to first place for the round with Denofa second, and Pawlak third.

However, the season championship went to Gittin Jr. , who began the weekend in second place in the overall standings behind Tuerck. Although Gittin Jr. did not podium during the Irwindale rounds, after Tuerck collided with rookie Jonathan Nerren in his CJ Pony Parts/Shelby American Super Snake in round 8, the Toyota driver was deemed at fault, eliminating Tuerck and boosting Gittin Jr. to the 2020 Pro championship.

Competitors weren’t the only ones who faced with adversity this season. The team behind Formula DRIFT had its challenges in responding to the virus and to events without spectator support.

“Even without fans, who we sorely missed, the teams brought so much energy it filled the arena and created an amazing atmosphere,” said Formula DRIFT president Jim Liaw.

“And it was great to see new faces on the podium. As for the championships, this wasn’t the season we hoped for at the start of the year, but the buildup created a lot of anticipation for the new format and different venues. There was a convergence of PRO champions, with winners dating back to 2009 in contention this year.

“It turned out to be one of the most intense championships in our history, even though we had to adjust and change our approach to make it happen.”

Laguna Seca getting a makeover