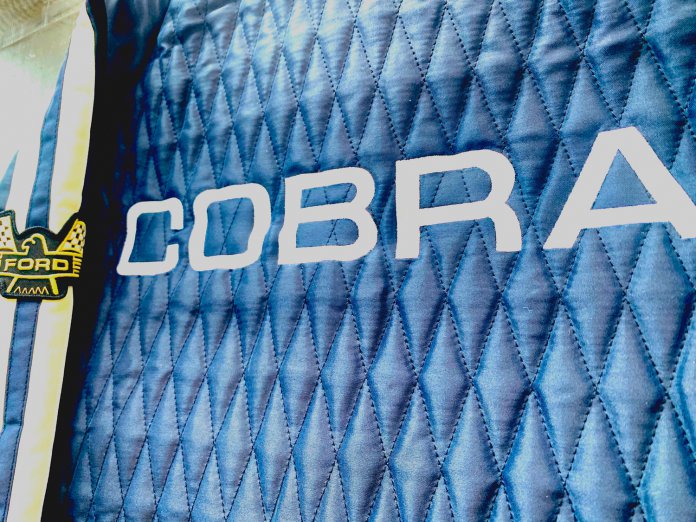 Original Venice Crew Limited, creator of the OVC Shelby GT350R, has expanded the company’s offerings in a merger with Racing Division Inc.  They are introducing a limited quantity of handmade Quilted Blue Cobra Jackets for the ultimate Shelby and Ford performance enthusiast. Only 75 jackets will be offered to the public, and once sold out they will never be produced again, the company said in a news release.

“We’re very pleased to offer these very limited-edition jackets that were part of the inventory manufactured by Racing Division,” said Jim Marietta, CEO of the Original Venice Crew Limited. “This Cobra Jacket pays homage to everyone who was part of the championship-winning race teams at Shelby American in Venice, California.

“Taking the remaining blue jackets at Racing Division, their design team added some important touches to make this limited-edition garment a special twist on the originals we wore nearly 60 years ago. It’s incredibly rewarding to offer this jacket, which celebrates the extraordinary people at Shelby American.”

Similar to Racing Division’s Wimbledon White jacket, the limited Blue Cobra jacket adds a bold “COBRA” embroidered on the back.  This addition was inspired by the Viking blue felt ones worn by the team in 1964. Other features include the Ford Crossed Flags logo on the sleeve and the CS patch on the front. The distinctive unisex jacket is available in limited sizes.

“The demand for Shelby clothing and gear has been incredible over the past few months thanks to the movies and documentaries that introduced Carroll Shelby and his passionate band of hot-rodders to the world,” Marietta said. “This special limited-edition jacket combines some of the most popular elements of the garments we wore at Shelby during those championship years.

“This jacket gives people an opportunity to capture some of the magic and excitement they experienced on the big screen.”

The Quilted Blue Cobra Jacket is in stock and offered at $299 and now available for purchase through the Racing Division website.