What do you get when you take Ken Miles’ “Flying Mustang” and add independent rear suspension? A hoot. That’s what! 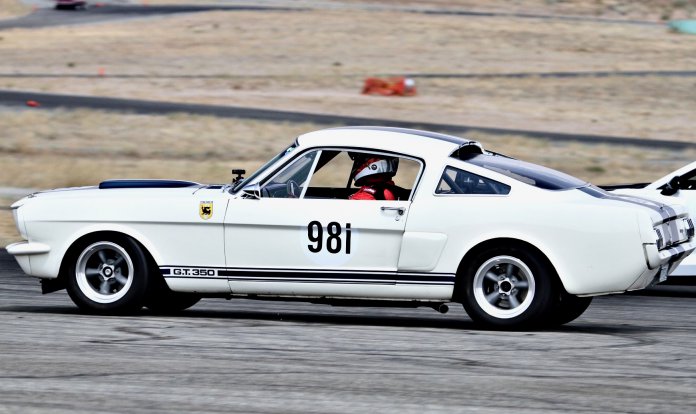 It was a 100 degree-plus scorcher at Willow Springs, but I didn’t even notice — despite being fire-suited up. Today I was test driving the Original Venice Crew’s GT350R Mustang IRS race car. As usual, the whole deal started with a phone call.

During a conversation with my good friend Rick Titus, he invited me to come to California and run the OVC GT350R with him at a Los Angeles Shelby American Automotive Club (LASAAC) track day.

Rick is special to me. Not only is he the son of legendary racer “Mr. Trans-Am,” Jerry Titus, and an incredible shoe himself, he was my very first race-driving instructor. We were joking about my progress since that first day when he told me, “You owe me $50 for every apex you miss.”

Needless to say, over my career as a journalist who drives race cars, I have racked up $Thousands in missed apexes, per his original deal… just don’t tell him, ok? So many times, despite numerous vintage racing wins, every time I even remotely miss an apex through a corner, having to brake or steer harder to get the car pointed right, I always whisper to myself, “that’s another damned fifty bucks you owe Titus.”

The Original Venice Crew is a very special designation to a few survivors from the days when Carroll Shelby had his shop in Venice, California. Guys like future champion racer John Morton drove across the country to sweep the floors at that shop for an opportunity. Peter Brock drew up beautiful cars like the Daytona. The late Phil Remington was an ace fabricator. It was there that the original Cobras were built, and names that rise above legend came to fabricate, build and learn at the feet of the chicken farmer turned Le Mans champ.

Jim Marietta was one of those early guys. He worked there as a high schooler. He would go on to college and a successful business career. But he always kept in touch with his compadres from the Shelby shop. This included Ted Sutton, a veteran Shelby fabricator and Peter Brock who had drawn up improved aero back in the day.

A few years ago, during one of the OVC reunions, the idea was thrown around about building the car “that could have been.” This includes aerodynamic design from Brock and an independent rear suspension that Ford accountants nixed pre-production – and continued to nix in regular production until the 2015 model year (the 1999-2004 SVT Mustangs, however, had IRS). With the blessing of both Ford and Shelby, the Crew bought two 1965 K-Code Mustangs off Ebay and built an amazing period race car.

The first cars were built at Brock Racing Enterprises (BRE) in Henderson, Nevada. OVC is now working and building from a shop in Gardena, California – a spiritual home to so many legendary shops. In the 50s, 60s and 70s, Gardena was to the American tuner culture that Milton Keynes is to F1.  I visited the BRE shop while the initial build was in progress and got to talk to the guys while they were building them.

Today we are at Streets of Willow. It is a smaller road course than Big Willow. You will experience 14 corners in a 1.55-mile lap. Streets is a very sporty circuit with a variety of corners including a decreasing radius corner at the end of the front straight; a banked carousel; and the back straight with a blind chicane. A good lap here is very satisfying.

Suited up and post walk-around, I strapped in for my first “slow laps” to get a feel of the car. Titus warned of the very hard steering. Obviously, I had driven race cars bereft of power steering, but I will admit this GT350R is quite the upper body workout – even in a few short warm up laps.

The engine note on this Wimbledon White with blue stripes weapon, was lovely. Equipped with a Ford 289 V8, bored to 331 cubic inch engine, the car makes approximately 465 bhp to the wheels. The trusty top-loader four speed is a period trans that was surprisingly easy to shift: no need for double clutching as you reach for a gearchange.

I pulled out of the pits, shifting through the gears to 3rd and headed up to where the straightaway hits turns one and two — hard-a-starboard as I pulled on the wheel – having to go hand over hand, then a downhill ‘hurry down’ and hard-a-port into a 90-degree left hander as the track snakes to “the Bowl.”

After the first lap, I let the car loose a little more, staying it top gear through one then a straight-line brake tap and down shift to 3rd for turns two through eight. Once again the steering was hard, but the car went right where you pointed it.

Cornering was made easier as I steered with the throttle quite a bit through the tight corners. The car was very torque-y which allowed to keep the speed up. The independent rear suspension, which was dialed in by Titus and John Morton on Big Willow a couple years ago, felt quite different in feeling the car in the corner. This car definitely communicates with the driver.

At turn eight a banked carousel called “the Bowl” is the place to set the car up for the back straight. Wham! On the throttle hard and an up shift to fourth we were flying! Of course there is a blind chicane through nine and ten – still flat.

Then it’s time to lift straight line brake –hard — and downshift back to third, blipping the throttle and back on the power through the apex of turn eleven through twelve and thirteen. Fourteen is a pyloned corner on the skid pad that takes you 180 degrees around jumping hard on the throttle and an up shift past the flagstand on the front straight.

After the first session in the car, I pulled into our paddock area, switched off the car, unstrapped and climbed out. Titus walked up and inquired how the run went. “I have a newfound respect for guys like your dad and Ken Miles who would run these at 110% for 250 to 500 mile races.”

I had several more sessions into the afternoon with great comradery from Marietta, Titus, my buddy Jonathan Sieger, Randy Richardson and all the guys and gals with LASAAC, and a handful of friends who came out to enjoy a day at the track.

At $250,000 base and as tested, $350,000, this car is a vintage racing bargain! The original cars from this era are into the high-six and low-seven figures now. There is a limited production run of 25 made-to-order OVC GT350Rs. The company has sold a number of copies.

Overall the experience of driving a period race car like the GT350R really does transport you to a much more gilded age of manhandling lots of horsepower – and made me appreciate the pony-car war era of Trans-Am.

• Competition prepared cast iron or aluminum engine from the Carroll Shelby Engine Company available in 289, 331 or 364 c.i.d. as a customer option