Pick of the Day: 1976 Triumph TR6 with low mileage and roadster flair 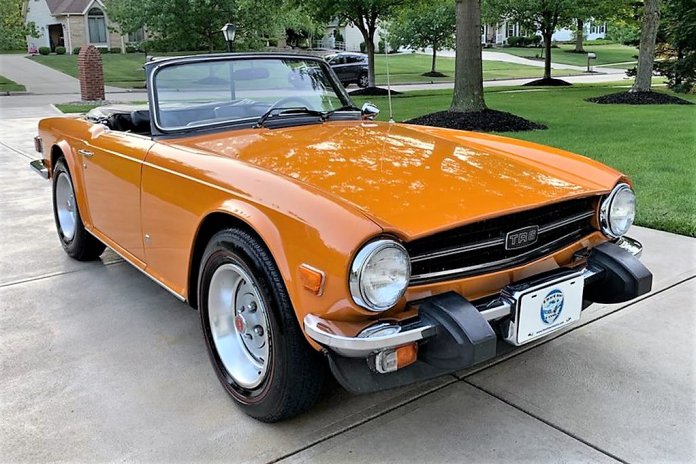 The Triumph TR6 was a notable high point for small sports cars from the U.K., a handsome and powerful roadster that put some modern flair into the British tradition.  The styling and mechanicals were aimed directly at the U.S. market, with more than 90 percent of the nearly 92,000 produced exported from England, most bound for America.

The Pick of the Day is a 1976 Triumph TR6 from the final year of production. The TR6 launched in 1968, basically as an update of the Giovanni Michelotti-designed TR4 and the subsequent TR5 (TR250 in the U.S.) that pioneered the 6-cylinder drivetrain found in the TR6.

This TR6 is a rare low-mileage survivor, as most of these cars racked up loads of miles driven with brio by enthusiast owners. With just 42,000 miles on the odometer, this Triumph shows a high level of care and maintenance over its believed two-owner lifetime.

“Everything on this car is in excellent working order,” according to the North Royalton, Ohio, dealer advertising the Triumph on ClassicCars.com. “Original paint with some minor patina from age; the metal on this car is outstanding, very clean throughout.

With a body updated by Karmann of Germany, the signature feature of the TR6 (aside from its plus-size wheels and tires) is the 2.5-liter inline-6.  These were not powerhouse engines, generating just 101 horsepower, but a decent 143 pound-feet of torque with a smooth, throaty delivery make them feel strong and sporty.

The Triumph is apparently all-original with a solid, rust free body with good glass and trim.  The seller shows some closeup pictures of dings and scratches, though seemingly nothing major, with other pictures showing the clean undercarriage.  Those massive rubber bumper guards mandated by the DOT are truly unfortunate, however.

The engine recently received a major service that included the head being removed, cleaned and magnafluxed, a full valve job and installation with a fresh head gasket, the seller says.

“The motor starts easy, it sounds smooth, shifts excellent, stops, steers, and runs beautifully,” the dealer says in the ad. “It can truly be driven with complete confidence and reliability.”

While modern-looking, the underpinnings of the TR6 remain rooted in the early days of the TR4, and the feel of the roadster is decidedly vintage despite the addition of independent rear suspension (like the later-model TR4A and TR5).  Most fans love that stiff vintage feel, as well as the car’s exceptional cornering.

This low-mileage example is modestly priced at $15,900.

Like most British cars from the era, the TR6 was not made for taller drivers, who should try the Triumph on for size before making any purchase decision.