Every single race from beginning to end 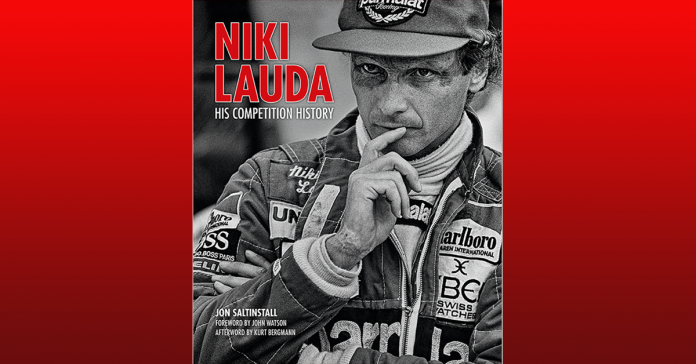 Every once in a while, a biographical book comes along that is so exhaustive in its research and detail it is about the finest compliment that can be given to the subject of such a tribute. I have read two such books in my lifetime.

The first was the late (and wonderful) Michael Argetsinger’s Mark Donohue: Technical Excellence at Speed. The latest is Niki Lauda: His Competition History. Both books cover every race entered, the results and a short story on each.

Author Jon Saltinstall deserves props for the project and further deserves a champion’s laurel wreath for his passion. The Brit, a banker by trade, was a fan of the Austrian three-time Formula One World Champion from the time he was a child. What’s ironic, is Saltinstall only briefly met Niki but once.

In an interview about the book, Saltinstall explains, “The closest I got to talking to (Lauda) was in the paddock at Brands Hatch before the 1982 British Grand Prix. I asked him to sign my program; he said. “Maybe later.” Later never happened, of course. As the book itself was to be a fundamentally factual account and given Niki’s famous lack of interest in his own history, talking to him about his individual race performances was not critical to the narrative, actually. Either way, he would probably have said to me, ‘Why are you bothering with all this old sh*t?”

Anyone who has met the man or seen the Ron Howard epic RUSH, about the 1976 World Championship battle between Lauda and James Hunt, will know that Niki is a dry, analytical mind with mechanical sympathy that borders on the sixth sense. Brought up in a wealthy banking and political family in Salzburg, the idea of his going racing was a non-negotiable with his father. But hey, it was the late-1960s, a time when youth was rebelling against the institution.

Niki Lauda: His Competition History takes the reader from the very beginning, when he gave the middle finger to his family and began his pursuit of Formula One – in an Austin Mini Cooper. Niki Lauda then drove a Formula Vee Kaimann in 1969 and had a terrible Formula 3 season with McNamara in 1970 before switching to a Porsche sports car; with progress stalling, he took out a loan to buy a Formula 2 seat at March in 1971.

Lauda then debuted with March at the 1971 Austrian Grand Prix and continued with the team in 1972.  In 1973, Lauda went to BRM — still paying his way with more loans and income from racing touring cars — including the iconic BMW 3.0 CSL.  For all that effort, he only had one points-scoring Formula 1 finish.

Then Maranello came calling. He won the World Championship twice in four years, in 1975 and 1977, and made one of the greatest sporting comebacks in history in 1976 after a horrific crash at the Nurburgring. Lauda left for Bernie Ecclestone’s Brabham team for the 1978 season due to conflicts within the team.

Lauda won the 1978 Swedish Grand Prix in Brabham’s borderline legal ‘fan car.’ the team’s He retired at the end of 1979 for the first time, ‘tired of driving round in circles’ and focused instead on his new airline business, Lauda Air. But then tempted by a huge salary offer, Lauda returned in 1982. By 1984 he secured his third World Championship. At season’s end in 1985, with a career tally of 25 Grand Prix victories, Lauda hung up his helmet for good.

The book goes on to illustrate his career as a team manager and the subsequent tests he did in the team cars — as he famously did with the Jaguar Team, which he managed, in the early 2000s.

Lauda passed away last year just prior to the 2019 Monaco Grand Prix. In racing circles he is revered. This is a book that does his career absolute justice.