Fast fact: Chevrolet Suburban is the longest-running automotive nameplate in the world, reaching 85 years of continuous production since its introduction in 1935.

Another fact: Chevrolet Suburban is the first vehicle to reach 85 years of continuous production.

Chevrolet is celebrating the 85th anniversary of its truck-based workhorse/people mover/law-enforcement vehicle/family wagon, the depression-era innovation that introduced the enduring concept of a sport utility vehicle. 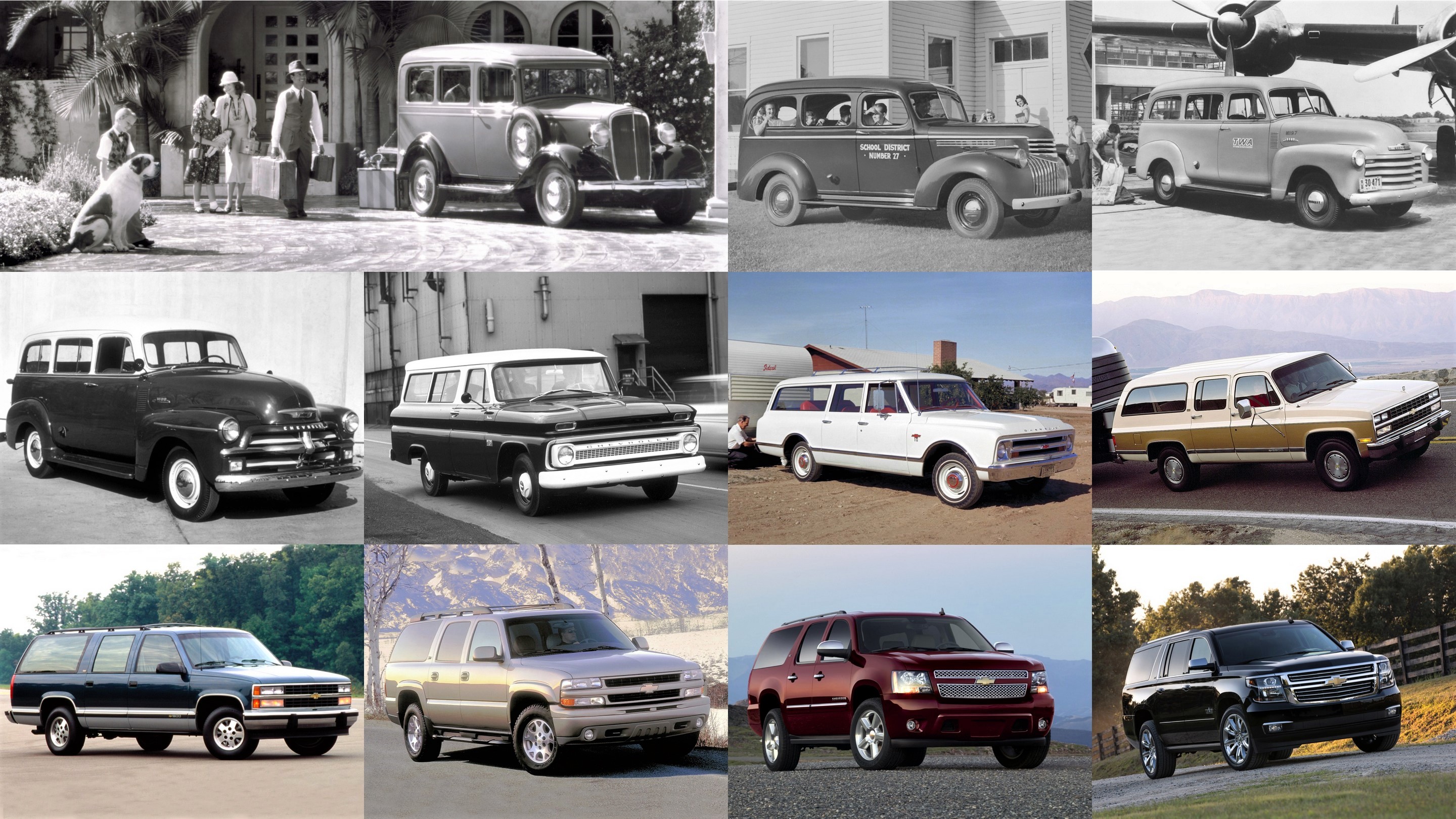 “While the world has changed significantly, the Suburban is just as relevant today as it was in 1935. Suburban created the sport utility vehicle – offering unprecedented combination of passenger comfort and cargo capacity,” Paul Edwards, Chevrolet marketing vice president said in a news release. “That has earned Suburban the trust of a wide range of people – from families to law enforcement, and even a starring-role in pop culture.”

The original 1935 Suburban could seat eight in its three rows of seats, with 115.1 cubic foot cargo area with the two back rows removed. It was powered by an inline-six-cylinder engine that produced 60 horsepower.

The 2020 Suburban seats up to nine and offers up to 121.7 cubic feet of cargo space when the second- and third-row seats are folded down. The available 6.2-liter V8 produces 420 horsepower, seven times the power of the 1935 model.

“Car-based wagons for professional use were offered by most manufacturers throughout the early 1930s,” Chevrolet says in the news release. “Most of these early vehicles featured wood sides and canvas tops, and while they were versatile, their car-based platforms and damage-prone bodies were not suited for continuous commercial use.

“It was clear that customers required something more. Chevrolet began testing an all-steel wagon body mounted on a commercial chassis in the mid-1930s. This research and development resulted in the launch of the Suburban Carryall in 1935 – the first heavy-duty, truck-based wagon of its kind.”

Suburban became increasing popular during the post-war years, hitting the mainstream in the early 1990s with the SUV boom, Chevy says.

Suburban’s 85-year history can be broken down into 11 distinct generations: 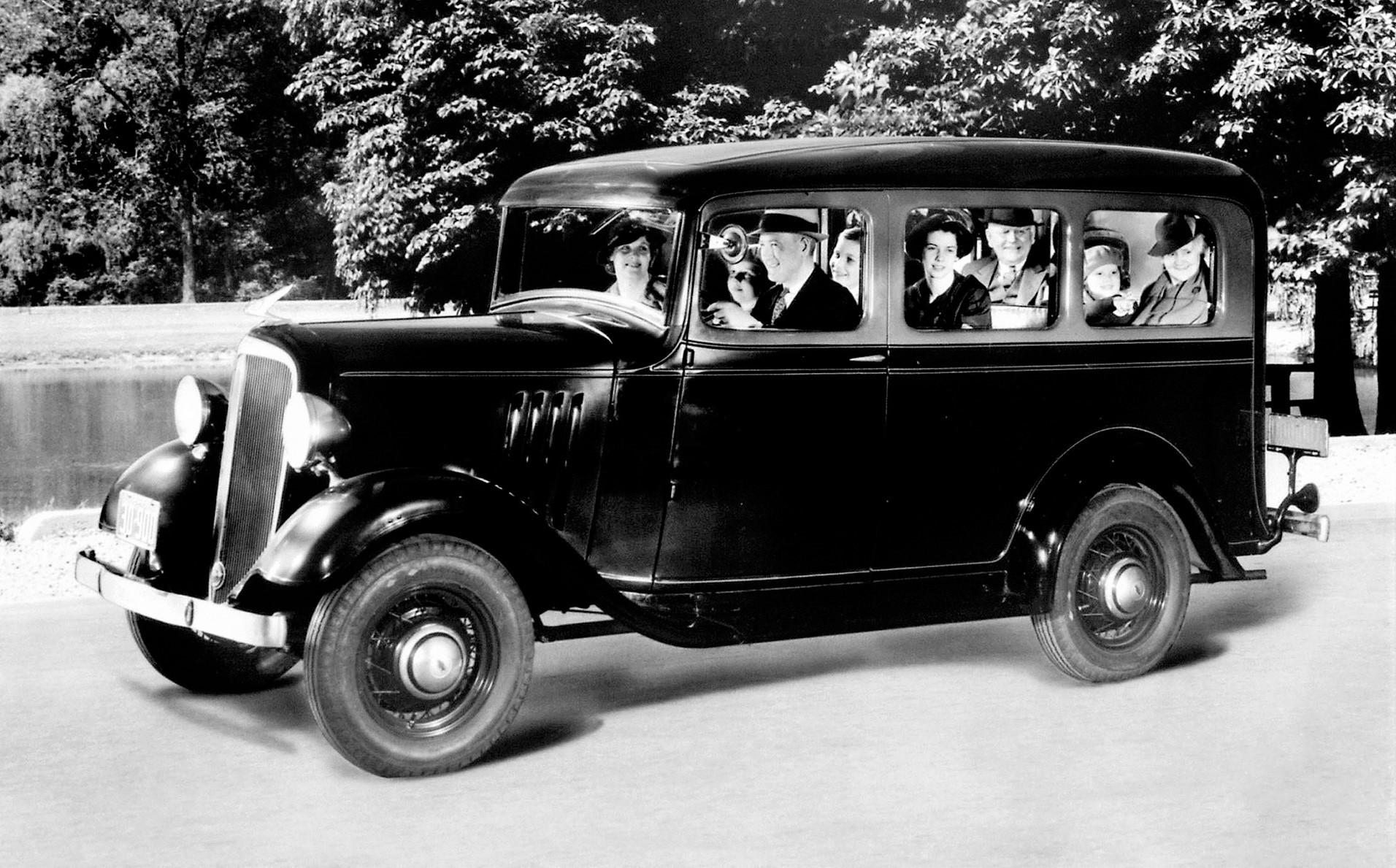 Generation 1 – 1935-40
The Suburban Carryall is introduced on a half-ton chassis, with a signature two-door body style that would be produced through 1967. Power came from Chevrolet’s tough “Stovebolt” inline-six that produced 60 horsepower. In 1937, new Art Deco exterior design cues were added and power was increased to 79 horsepower. 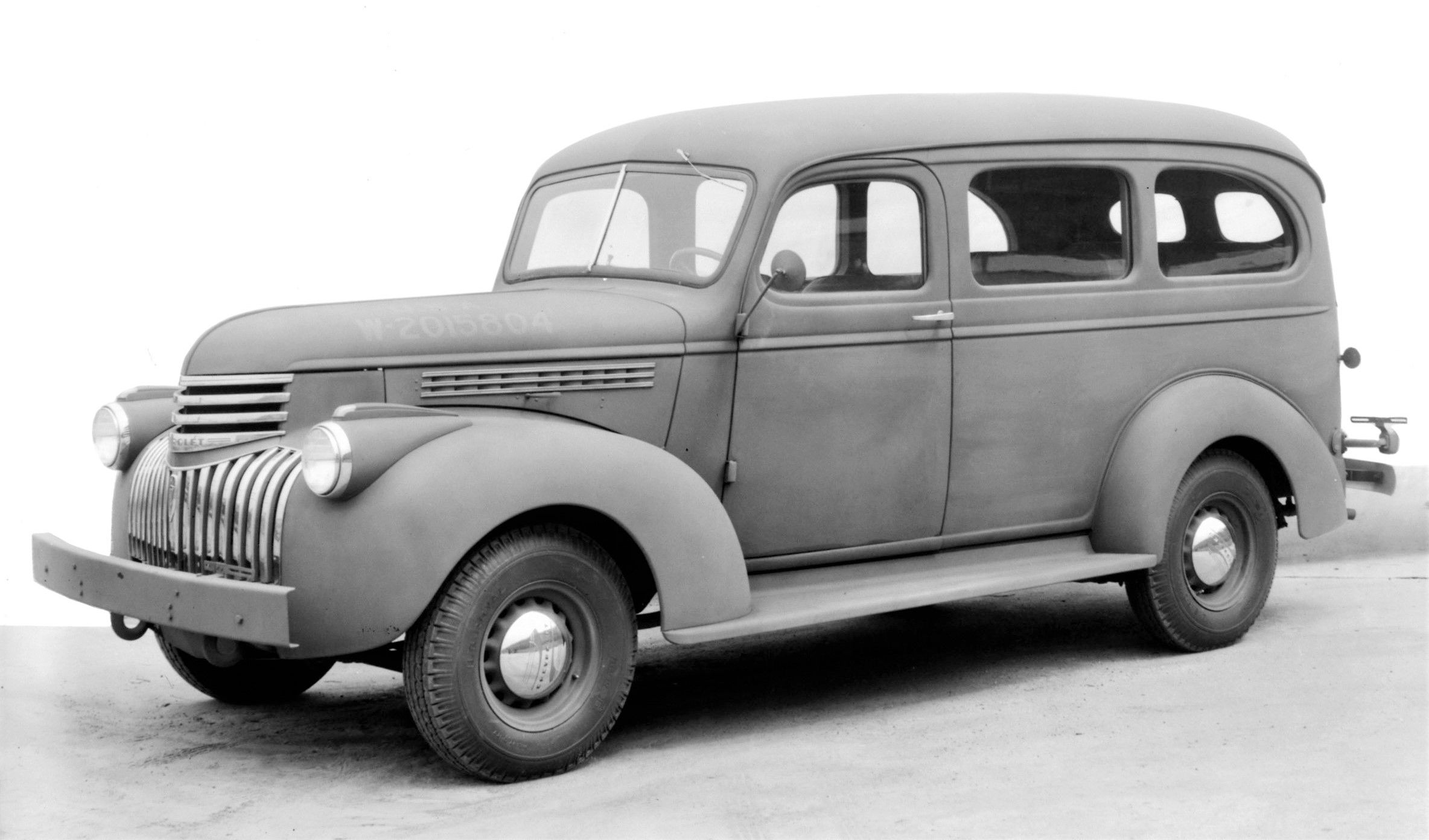 Generation 2 – 1941-46
Production of almost all civilian vehicles halted during America’s involvement in World War II, although many Chevy trucks – including the Suburban’s body style – were produced for military duty. 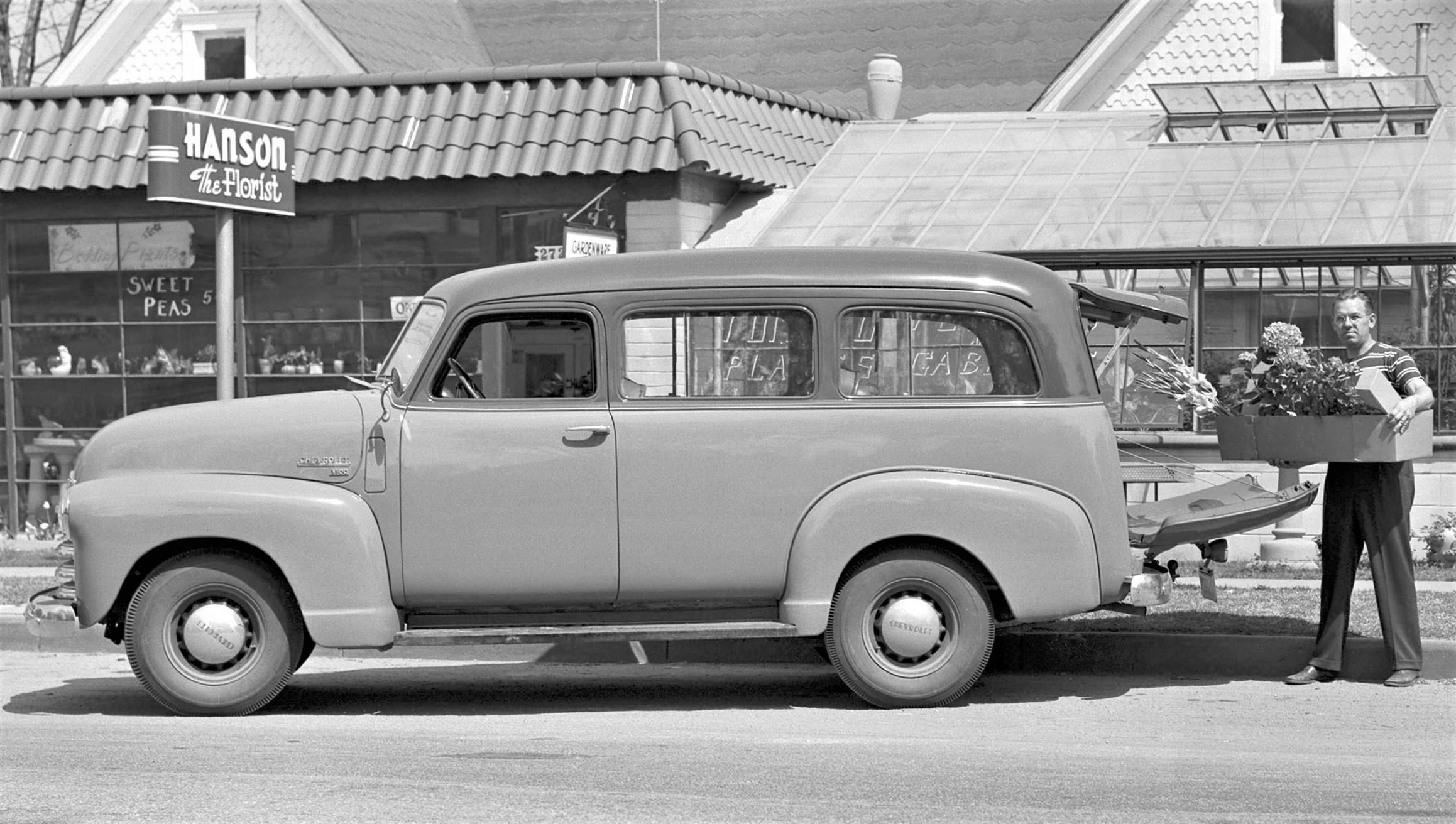 Generation 3 – 1947-55
Representing the first significant redesign of Chevrolet’s truck line since before the war, the Suburban was welcomed by professionals in need of an all-new workhorse. Torque from the inline-six engine was 174 pound-feet at 1,200 rpm, creating strong towing capability.

Generation 4 – 1955-59
New styling and technology is introduced for Suburban midway through the 1955 model year. Known as the “second series” design, it featured a wraparound windshield and the elimination of running boards, the body now flush with the fenders. The biggest addition was Chevrolet’s first V8, the legendary small block. In 1957, factory-installed four-wheel drive is offered for the first time, with the famous NAPCO-supplied “Powr-Pak” system. 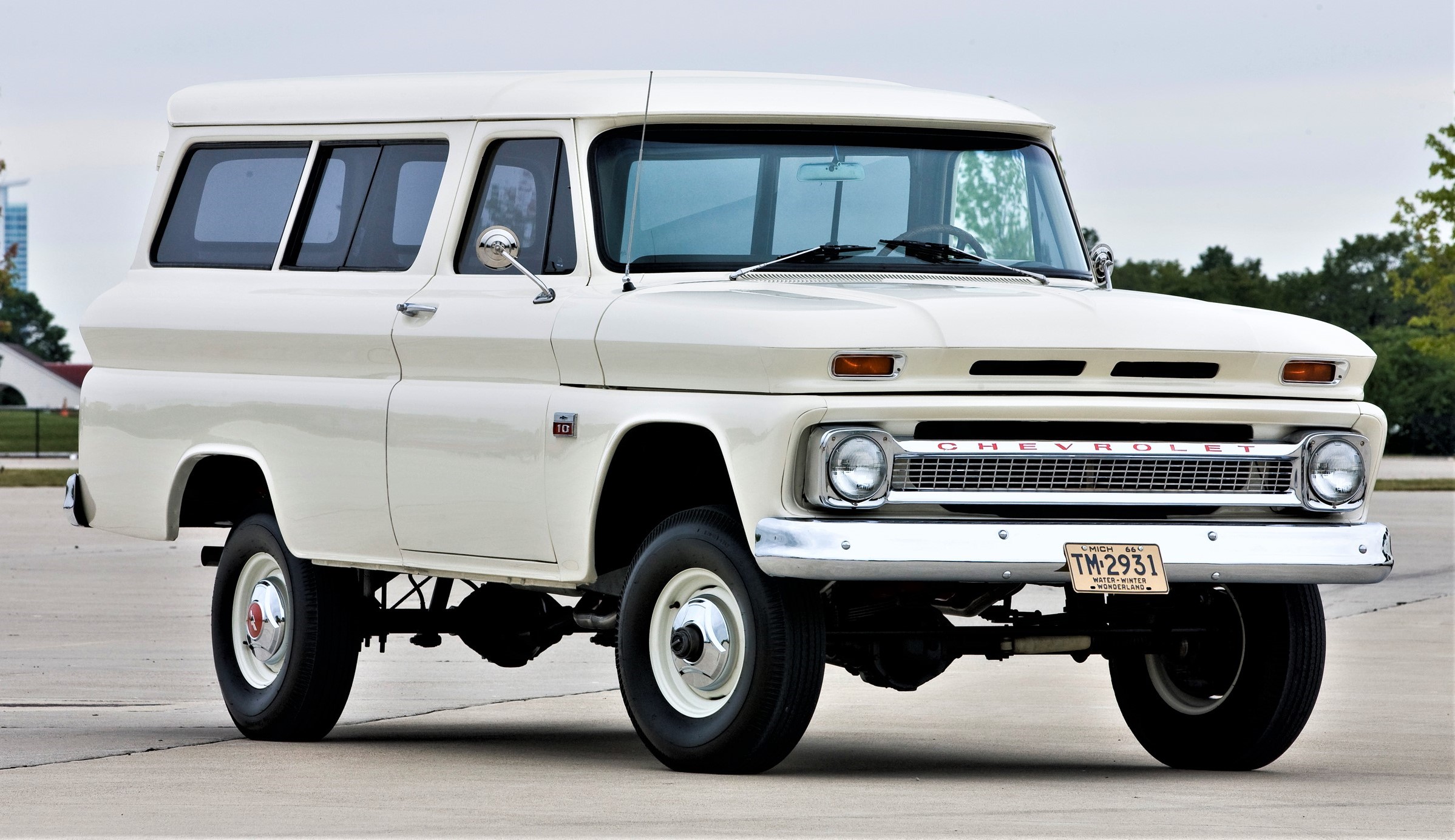 Generation 5 – 1960-66
All-new styling greeted the 1960s and Chevrolet instituted the C/K designations to denote models with 2WD (C) and 4WD (K). In 1963, a ladder-type, channel-section frame replaced the X-member, box-section frames used in previous years. With a focus on passenger comfort in 1965, factory-installed air conditioning and a rear-area heater are offered for the first time. 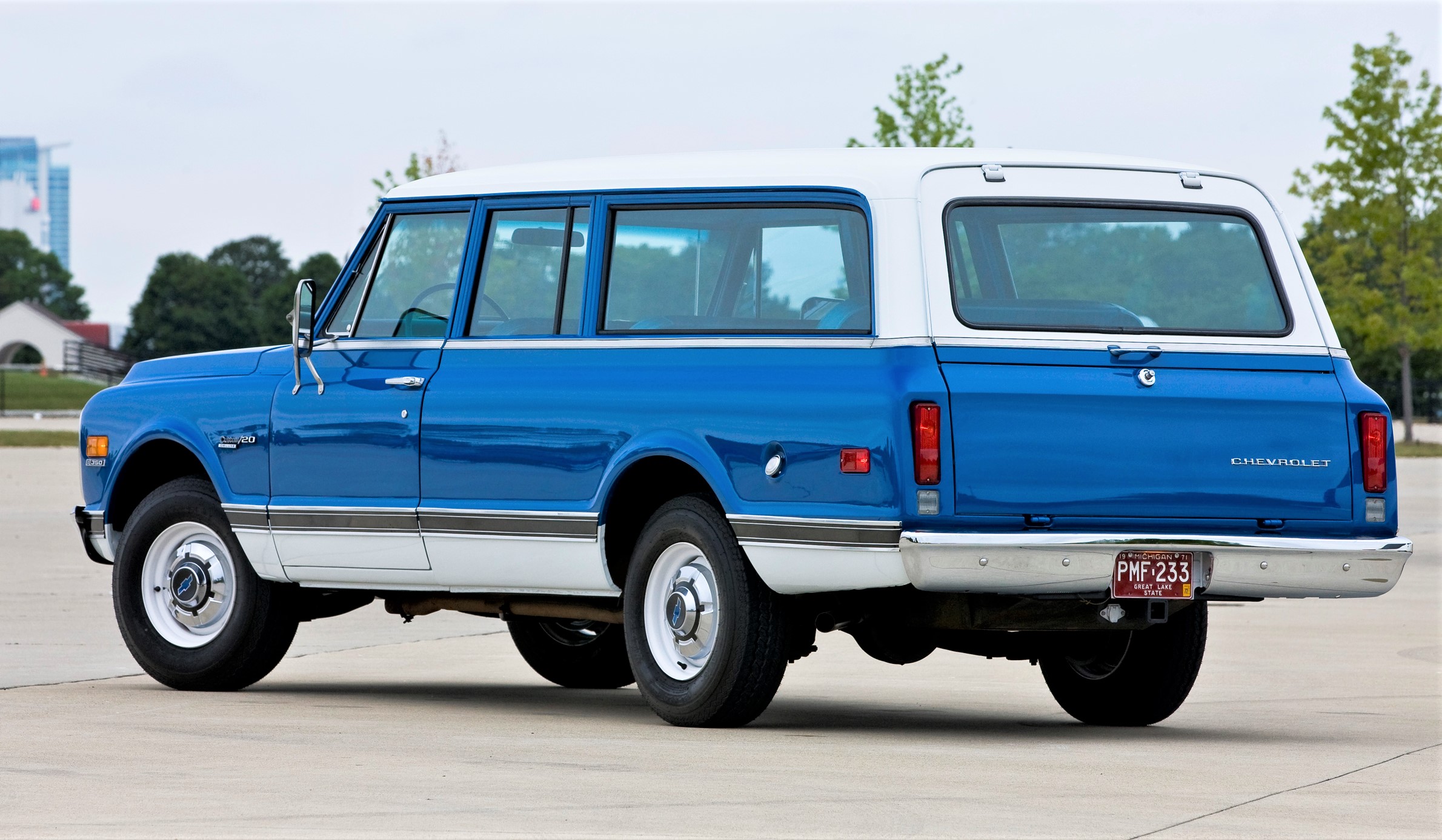 Generation 6 – 1967-72
A redesign of Chevy’s half-ton trucks is introduced, and for the first time since its debut, the Suburban now had three doors – with a single door on the driver’s side and front and rear doors on the passenger side. This new configuration, with easier access to the cargo area, was popular with ambulance companies. 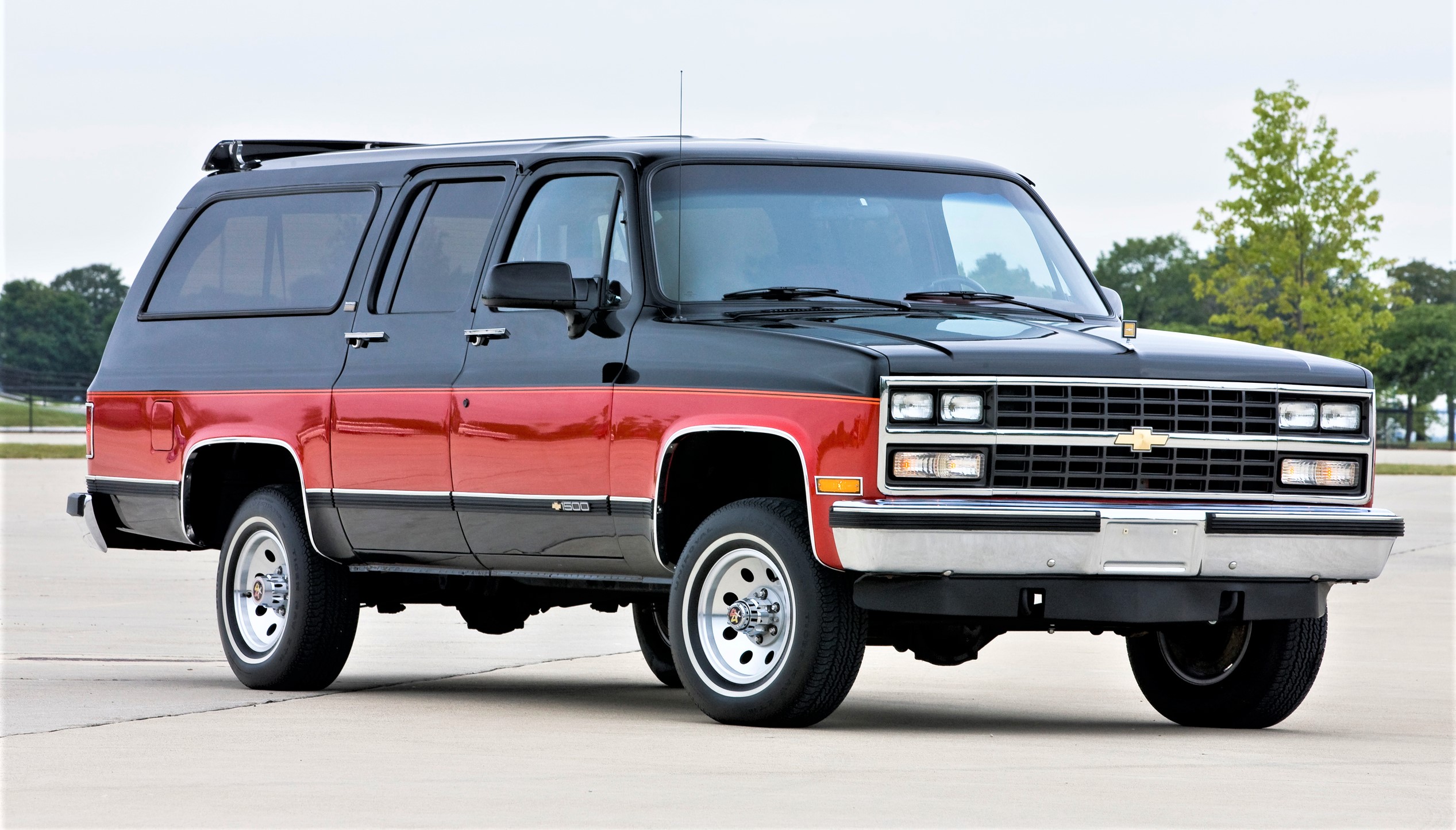 Generation 7 – 1973-91
The Suburban is completely redesigned and for the first time, offered a conventional four-door body style. The wheelbase was stretched to 129.5 inches with an increased focus on interior comfort and amenities that brought more personal-use customers to Suburban. By the late-1980s, electronically controlled fuel injection and a four-speed overdrive transmission brought greater efficiency. 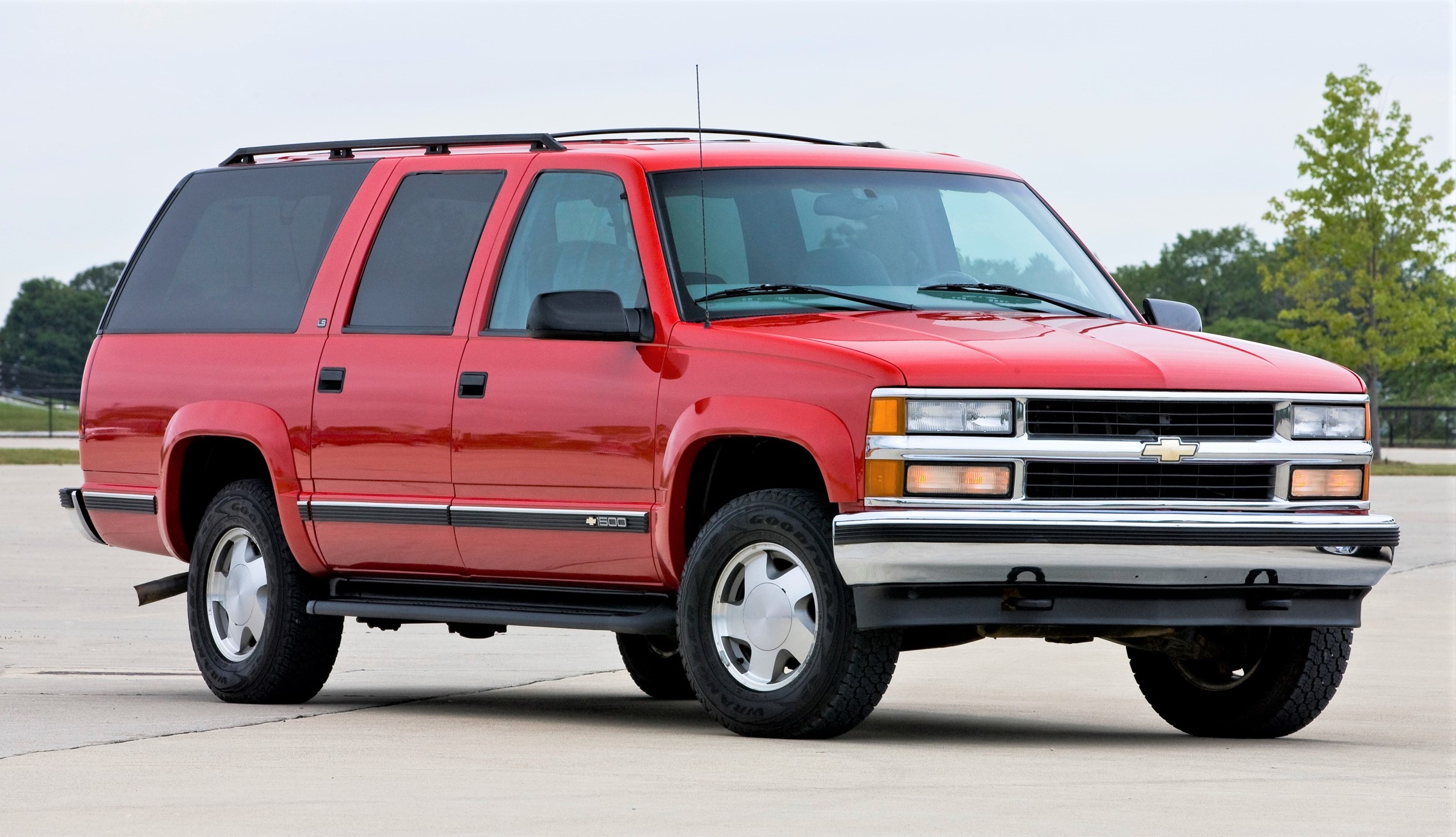 Generation 8 – 1992-1999
An all-new Suburban featured sleek styling with flush glass and composite headlamps. Other updates included four-wheel antilock brakes, Insta-Trac “shift-on-the-fly” on four-wheel-drive models and a suspension system designed to provide a more carlike ride. In 1998, available OnStar and the full-time AutoTrac all-wheel-drive system are added. In Australia, right-hand-drive versions of the Suburban are offered through GM’s Holden brand. 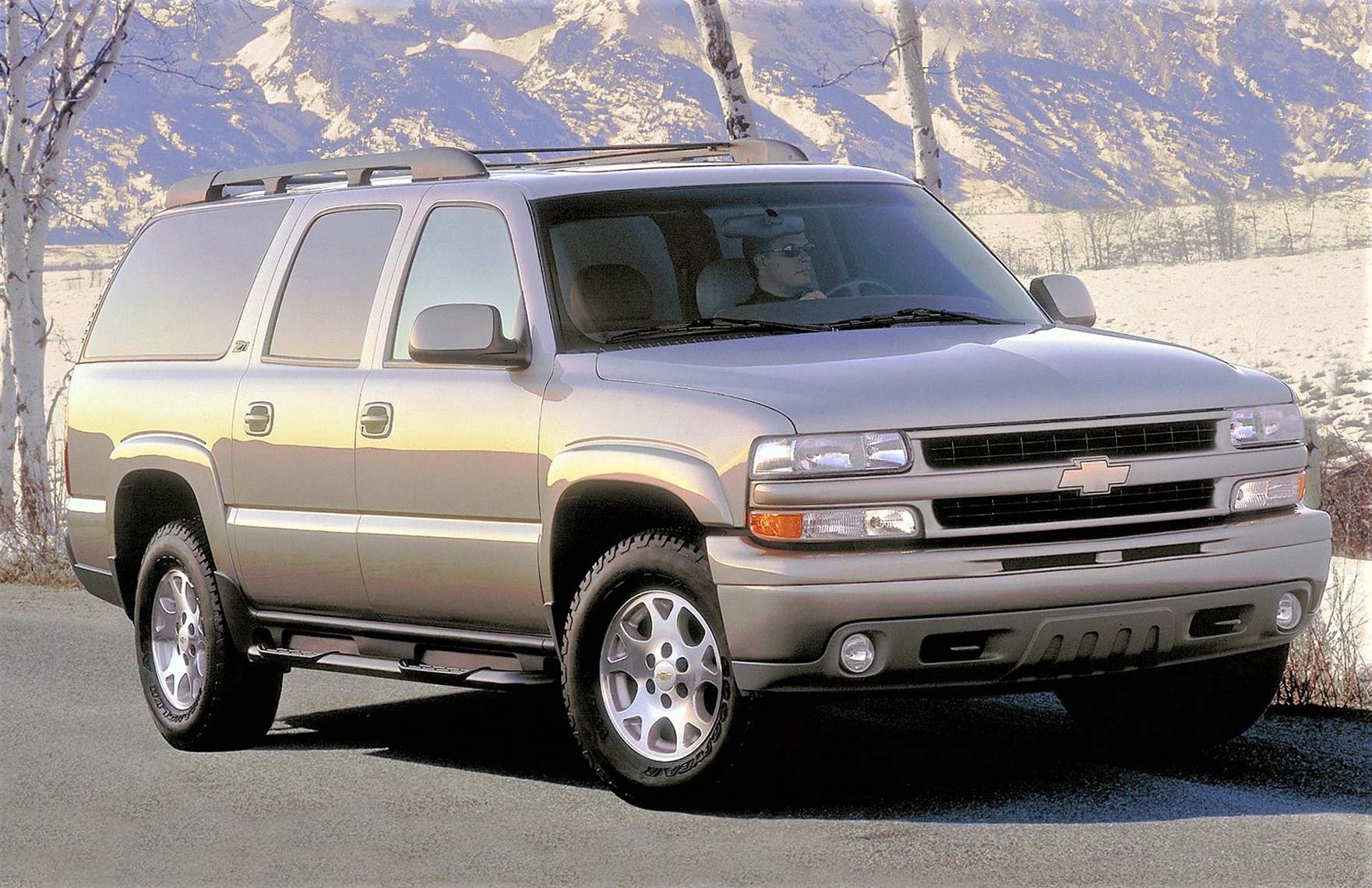 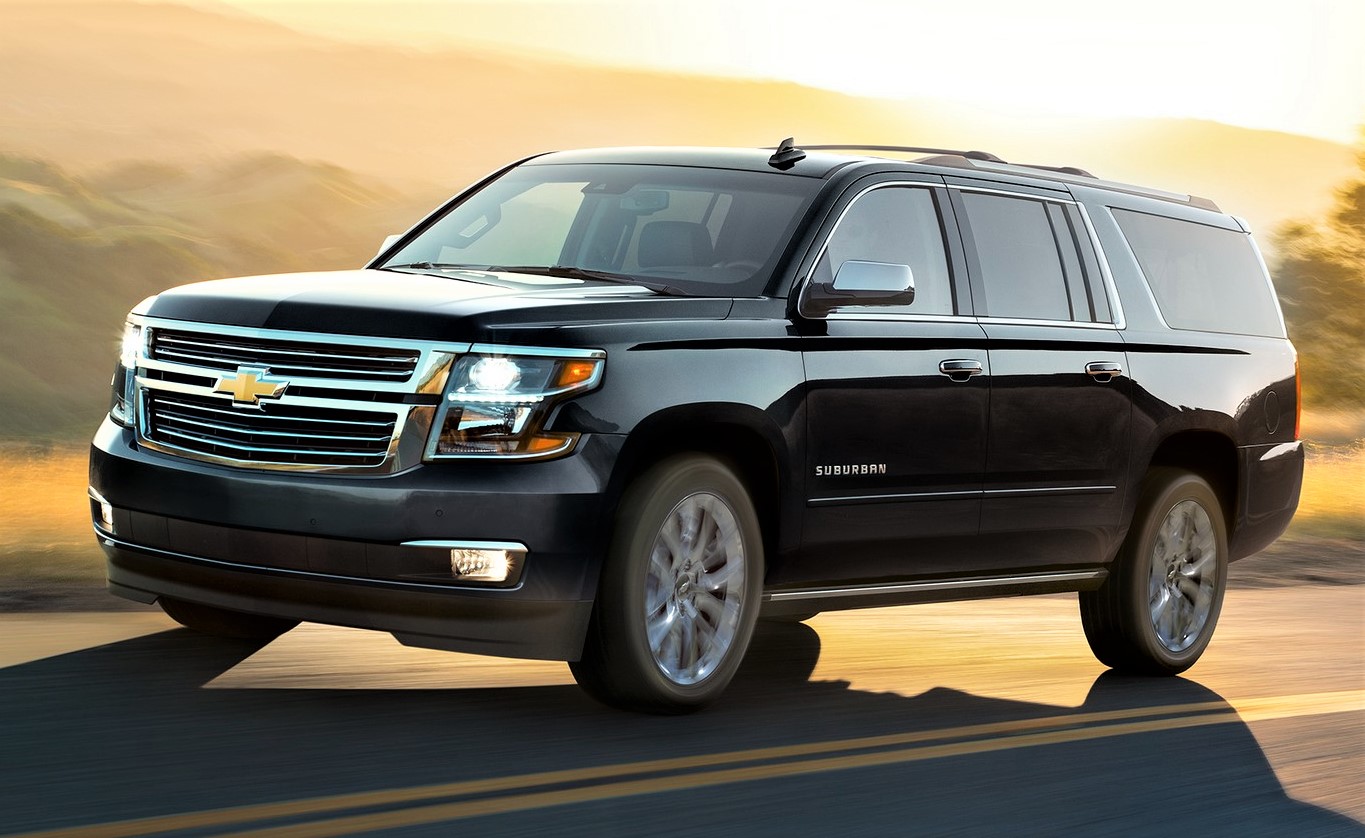 Generation 11 – 2015-Present
Completely redesigned to be more functional and refined, while offering more features and a greater range of advanced technologies, the current Suburban is also more efficient, thanks to a range of enhancements that include a more aerodynamic design and a new, direct-injected EcoTec3 5.3L engine. Improved aerodynamics also contributes to a quieter interior. A bevy of standard customer-focused technology features such as 4G LTE Wi-Fi Hotspot, Apple CarPlay and Android Auto are also added.