Museums examine ‘Life Is a Highway’ and our automotive future

The automobile’s role in American culture and visions of our automotive future are the subjects of significant exhibits at museums here and abroad.

Here, at the acclaimed Toledo Museum of Art, the subject of “Life Is a Highway: Art and American Car Culture,” is the theme of an exhibit that features more than 100 works of art — paintings, sculptures, photographs, etc. — that focus on car culture, especially in the Midwest.

The art is focused on four themes — social, aesthetic, environmental and industrial dimensions with images that either celebrate or critique the car’s legacy.

The exhibit opened June 15 and runs through September. But the exhibit also extends beyond the museum’s walls and onto the museum grounds with a car show featuring American classic vehicles on August 24 and another featuring customized cars on September 14 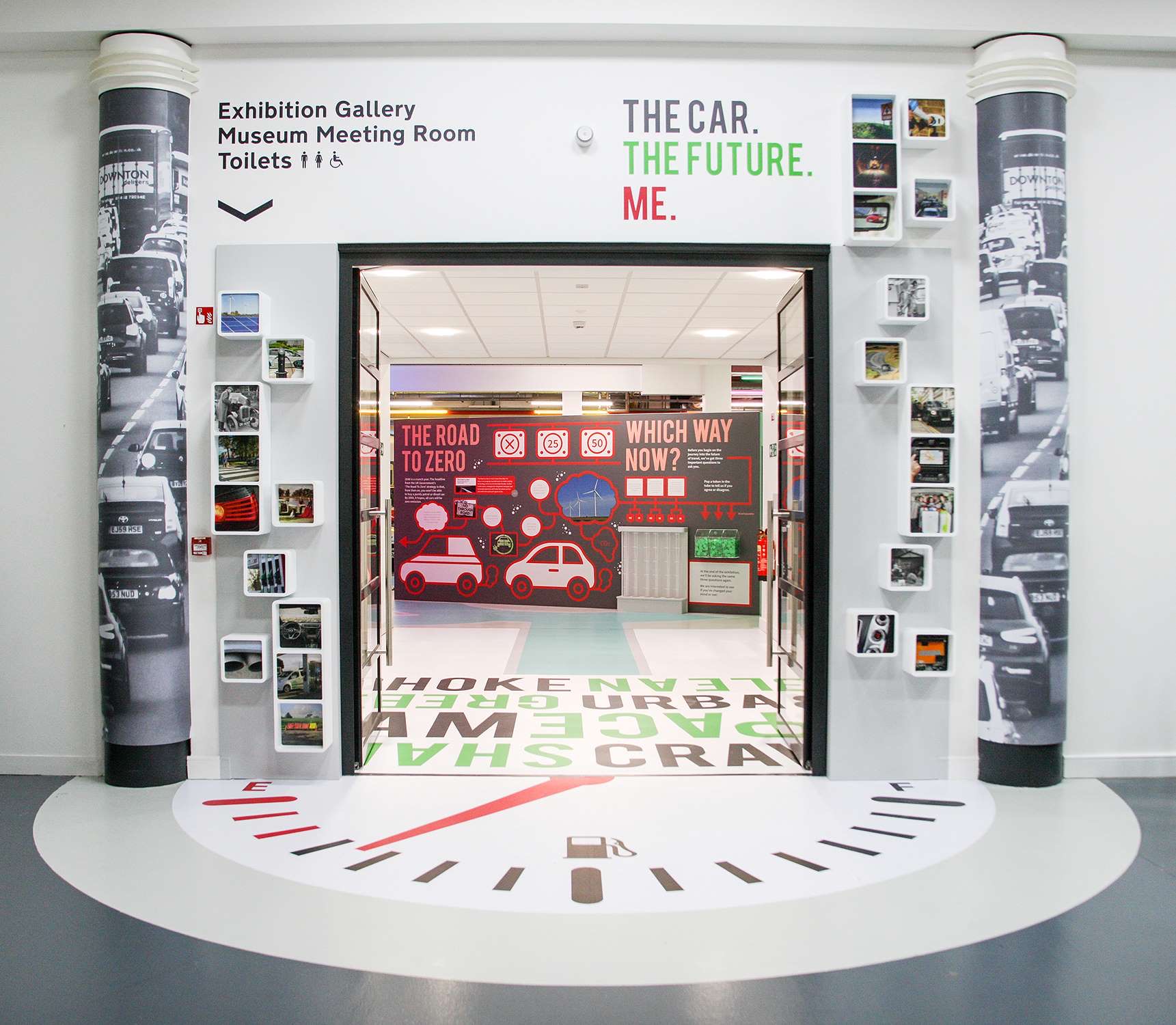 Meanwhile, the British Motor Museum at Gaydon, Warwickshire, England, has opened an exhibit, “The Car. The Future. Me” that runs until July 2020 that focuses not only on where the car has taken us, but how things are changing, and rapidly.

The museum said that exhibit examines visions of the future by the automobile’s inventors and designers, examines current automotive technology and looks at how electric cars work and if such things as autonomous vehicles are the best solution for our future.

Among the vehicles on display are the Triumph XL90, a concept car that looked toward Y2K, and the new Aurrigo PodZero autonomous vehicle.

‘Museum Fun Day!’ at the Lane

With its collection of some of the strangest and rarest vehicles on the planet, the Lane Motor Museum in Nashville, Tennessee, is already one of the most-fun car museums in the world, but it plans a special “Fun Day!” for July 20 from 10 a.m. until 5 p.m. featuring vault access, transportation-themed children’s activities, a presentation by author Jason Torchinky on Robot, Take the Wheel: The Road to Autonomous Cars and the Lost Art of Driving, vehicle demonstrations and rides in museum vehicles.

“With the announcement that AACA will be opening a new and modern library in 2020, the timing seems perfect (for the gift),” Gerrard said in the library’s announcement. “I believe strongly in the library and its mission, and I hope that the materials will help other collectors and restorers for many years to come.”

Not only are the objects part of the library’s collection, but they have been digitized for easier access.

“90 years of BMW automobiles” is the theme for a new exhibit at the BMW Museum in Germany and is based on the start of production of the BMW 3/15 PS in Eisenach and victory in the 1929 International Alpine Trial.

“This marked the start of BMW’s success, a story that is still unfolding to this day,” the museum notes, adding that 90 years exhibit runs until October.

Also opening at the museum is a special exhibit, “An icon turns 60: Mini,” a celebration of the Alec Issigonis’ creation in 1959 of the Mini. The exhibit runs until October 27.

“Women Who Motor,” an exhibit that debuted at the Edsel and Eleanor For House, makes its debut July 19 at the Gilmore Car Museum in Hickory Corners, Michigan. The exhibit features women who have made an impact on the automobile as inventors, engineers, designers, racers and consumers.

The Simeone Foundation Automotive Museum in Philadelphia will feature “Mini Matchup,” an exhibit of classic and contemporary Mini Coopers from July 20 through August 4.

As part of its “Daredevils: A Century of Spine-Tingling Spectacles” exhibit, the Harley-Davidson Museum in Milwaukee will be the site of a performance by the Division BMX Stunt Team from 1 to 4 p.m. on July 20.

LeMay – America’s Car Museum in Tacoma, Washington, hosts RADwood PNW (Pacific NorthWest) on July 20 to celebrate vehicles from the 1980s and ’90s. The event is being held in conjunction with the AVANTS car club of Seattle.

From the 1960s into the 1990s, the Hale Farm & Village in Cleveland hosted a car show. On July 21, the tradition returns with a car show that will include vehicles from the Crawford Auto-Aviation Collection and those from private collections and other entrants parked among the farm and village’s historic buildings.

The California Automobile Museum in Sacramento hosts a special Amphicar event on July 21 with owners of the aquatic vehicles offering rides on the Sacramento River.

It’s the 31st annual Mopars at the Red Barns car show and swap meet, July 27 from 9 a.m. until 4 p.m. at the Gilmore Car Museum in Hickory Corners, Michigan.

The Petersen Automotive Museum in Los Angeles will host a two-day Zora Duntov Tribute weekend July 27-28 with a Corvette rally, cruise-in and other events.

The British Motor Museum hosts “the biggest rally of classic Fords in the UK” on July 21. More than 400 classic Ford vehicles, all between 50 and 100 years old, are expected for the 11th annual “Old Ford Rally,” which this year includes the Capri’s 50th anniversary and the Sunbeam Alpine’s 60th birthday celebrations.

Stahls Automotive Museum in Chesterfield Township, Michigan, hosts its annual “Autos for Autism” fundraiser and cruise-in for the Ted Lindsay Foundation from 4 p.m. to 8 p.m. on July 25. Wayne Carini of Chasing Classic Cars and Detroit Red Wings player Dylan Larkin are scheduled to be special guests at the event.

The AACA Museum in Hershey, Pennsylvania, hosts a special presentation by Larry Clark, “Tucker Talk — The Tucker Business Model: Why the Feds Went After Preston Tucker (and why they failed), from 1 p.m. to 2 p.m. on July 27.

Starting at 5:45 p.m. on July 27 and running until 8 a.m. the following morning, youngsters ages 10-13 can spend the night at the BMW Museum in Germany. Among the activities scheduled will be moviemaking, with the young visitors shooting their own short films with the help of a stop-motion app, and then they’ll watch their flicks on a big screen while enjoying popcorn and beverages.

The Britain’s National Motor Museum at Beaulieu celebrates the 50th anniversary of the Nissan GT-4 and the 30th birthday of the Mazda MX-5 at its Simply Japanese cars how on July 28.

Autobooks-Aerobooks in Burbank, California, hosts George Levy, author with Pete Biro of F1 Mavericks: The men and Machines that Revolutionzied Formula 1 Racing from 10 a.m. until 2 p.m. on August 2.

Electric supercars will be featured August 3-4 when the National Motor Museum at Beaulieu hosts its Supercar Weekend. EV Evolution will be a new feature at the show, which also expects several hundred petroleum-powered exotic machines.

The Gilmore Car Museum in Hickory Corners, Michigan, stages its annual Red Barns Spectacular car show on August 3. More than 1,200 vehicles are expected, including special displays by the Tin Can Tourists and of antique boats and bicycles, as well as 380 swap-meet vendors.

August 9-11 is VW T Chill Weekend at the National Motor Museum in Beaulieu, England, where VW Transporter owners will be camping out in their vehicles. The weekend includes a cruise to Buckler’s Head and other family-oriented activities.

As part of its Rally Car exhibit, the North East Motor Sports Museum in Loudon, New Hampshire, will host Tim O’Neil, rally champion and founder of the Team O’Neil Rally School, who will discuss the history of rallying, talk about how to become involved and will do a walk-around featuring a rally car.

August 14 is the deadline to submit a pledge toward the effort by the Studebaker National Museum in South Bend, Indiana, to bid on the 1931 Hunt-Jenkins Special Indy racer that will be offered for sale at Gooding & Company’s Pebble Beach auction. Pledges can be submitted by email to [email protected].

The AACA Museum in Hershey, Pennsylvania, stages its Cars 4 Critters show on August 17 from 8:30 a.m. until 10:30 a.m. featuring sports and exotic cars and raising money for Speranza Animal Rescue.

The British Motor Museum stages its sixth “Buses Festival” on August 18, with visitors exploring around 100 restored, vintage and modern buses, even riding on routes around the Gaydon area.