Russo and Steele has lost its auction venue at Salt River Fields for Arizona Car Week in January, but a collector car sale will be held on the site by Leake Auctions.

The Salt River Pima-Maricopa Indian Community, owner of the Salt River Fields land adjacent to Scottsdale, did not renew its contract with Russo and Steele for its flagship home-base Arizona auction, instead inking a contract for the location with Leake. Leake, a Tulsa, Oklahoma, collector car sales company that is part of the global Ritchie Bros. auction business, announced this past weekend that it will conduct its inaugural Arizona auction at the Salt River site in January. 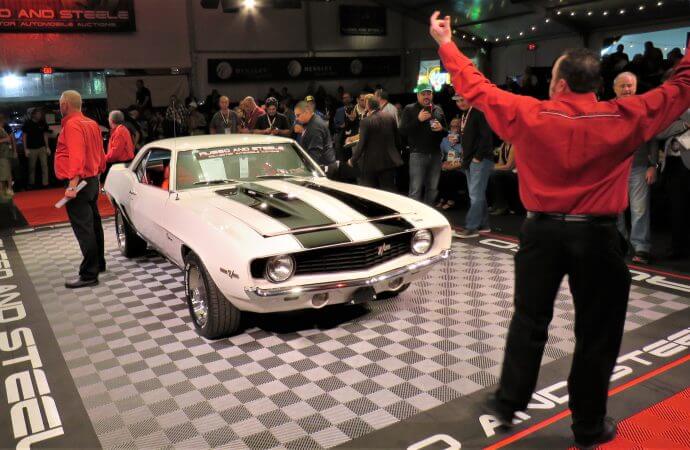 Russo and Steele, owned by husband-and-wife team Drew and Josephine Alcazar, has yet to announce where it will stage its January auction as the company marks its 20th anniversary. The company had held its annual Scottsdale auction at Salt River for the past three years.

In recent years, Arizona Car Week has included as many as seven collector car sales. That number grows to eight with the addition of Leake as, once again, Arizona will host the busiest collector car auction week of the year anywhere in the world.

Russo and Steele has filed a pair of lawsuits because of the displacement of its auction, alleging that it was booted off the desirable Salt River Fields as the result of efforts by Leake and Ritchie Brothers Auctioneers of Burnaby, Canada.

A suit filed June 10 in Maricopa County Superior Court in Phoenix, alleges that Ritchie Brothers and Leake undermined Russo and Steele in its dealings with the tribe and the operators of Salt River Fields.

The suit names Ritchie Brothers, Leake and company executives Gary and Muffy Bennett, a married couple, as the perpetrators of efforts to destroy Russo and Steele’s standing and reputation with the Indian community, which led to the non-renewal of the contract in October 2018.

An earlier suit, filed in January, is against an individual, Mark Landolfi, who had been Russo and Steele’s director of operations. The suit says Landolfi conspired against the company to help Leake obtain the January spot at Salt River Fields.  Landolfi was sued for damages along with his wife, Lori McLaughlin.

The suit says that, “While Landolfi was still R&S’ Director of Operations, Landolfi actively concealed from R&S his true plan and efforts to begin working for one of R&S’ competitors in the car auction space, to directly interfere with R&S’ long-standing, valuable relationship with (the Salt River community) and to thereby seize an unlawful advantage for the competitor, which, unlike R&S, did not have exclusive access to a premium auction event facility like Salt River Fields.”

Drew Alcazar said that he and his wife entered into legal action first against Landolfi only when the situation became untenable.

“The complaint against Mark Landolfi that we initiated actually goes back before the auction in January,” Alcazar said in an interview.  “We were so concerned about his nefarious activity back then.”

They moved ahead with the suit against the Ritchie Brothers, Leake and the Bennetts on June 10 only after they “were blindsided” by Leake’s announcement, he said, that it would hold its auction at Salt River Fields.

The investigators and legal team have gathered a formidable amount of evidence against all the defendants, Alcazar said, which will be brought before the court.

Landolfi could not be reached for comment on the suit against him.  A call to the Salt River Fields management was not returned.

The Ritchie Brothers, Leake and the Bennetts did not respond in an official capacity, although a source close to the auction companies said that they deny the accusations against them.

The source said the sports complex offered them the opportunity of taking the auction venue without any prompting or prior negotiations, and that they had done nothing to damage Russo’s standing with the tribe.

Alcazar said that R&S would conduct its January 2020 auction at a new Arizona site, and that they would not let the ongoing legal dispute put a damper on their 20th anniversary celebration.

“We have some really good options on the table that we’re really enthused about,” he said about the auction site.  “We’re trying to put the finishing touches on those plans.

“Now that this has been forced upon us, we’re working hard to make sure we have something going on in January that’s indicative of us celebrating 20 years of doing what we do.”