What Bob picked out at Gooding & Company auction in Scottsdale

European sports and GT cars are the mainstays for Gooding & Company auctions, and the offerings this year at the Scottsdale, Arizona, sale continue the trend with a brilliant collection of rare and wonderful vehicles.

There’s also a smattering of fine American pre-war classics and a couple of cool motorcycles along with the swell of Porsches, Ferraris, Cobras, Corvettes, Astons, Alfas and Jaguars, among others.  Ferrari is the most prevalent marque, at 30 cars out of a total of 125, including such seven-figure headliners as a 1952 Europa Cabriolet, a 1953 250 MM Spider, a 1958 250 GT TdF Berlinetta and a 1963 250 GT SWB Berlinetta.

Twenty-four Porsches are on the docket, ranging from a 1956 356A Speedster to a 2016 911 R.  There are three excellent Shelby Cobras, two 289s and a 427, and four Alfa Romeos, including a modern pair of 8Cs: a competition model and a road-going Spider.

Among the pre-war classics are three spectacular Packards, a 1941 Cadillac Series 75 eight-passenger sedan, a 1938 Rolls-Royce 25/30 all-weather cabriolet, a 1920 Locomobile, a 1902 Yale rear-entrance tonneau, a terrific 1936 Bugatti Type 57 Two-Light Ventoux and a replica of the first motorcar, the three-wheeled 1886 Benz Patent-Motorwagen.

Quite a selection, really, which continues Gooding’s strong presence at Arizona Auction Week.  The auction is in its usual spot with tents erected just north of Scottsdale Fashion Square.  For more information, visit the auction website.

Picking favorites among this grand grouping was not easy, and while I narrowed it to 11 cars, this only scratches the surface of the ones I’d like to have for keeps: My favorite of the Porsche contingent, mainly because it’s so great looking.  Superbly restored in attractive black paint with a red interior, this Speedster is a multiple award winner highlighted by its 2007 PCA Porsche Parade victory in the Speedster Class and the Weissach Level of Achievement award, which it repeated in 2014.  Chassis 82117 has had the same enthusiast owner for the past half century, and shows so much the loving care that went into it. 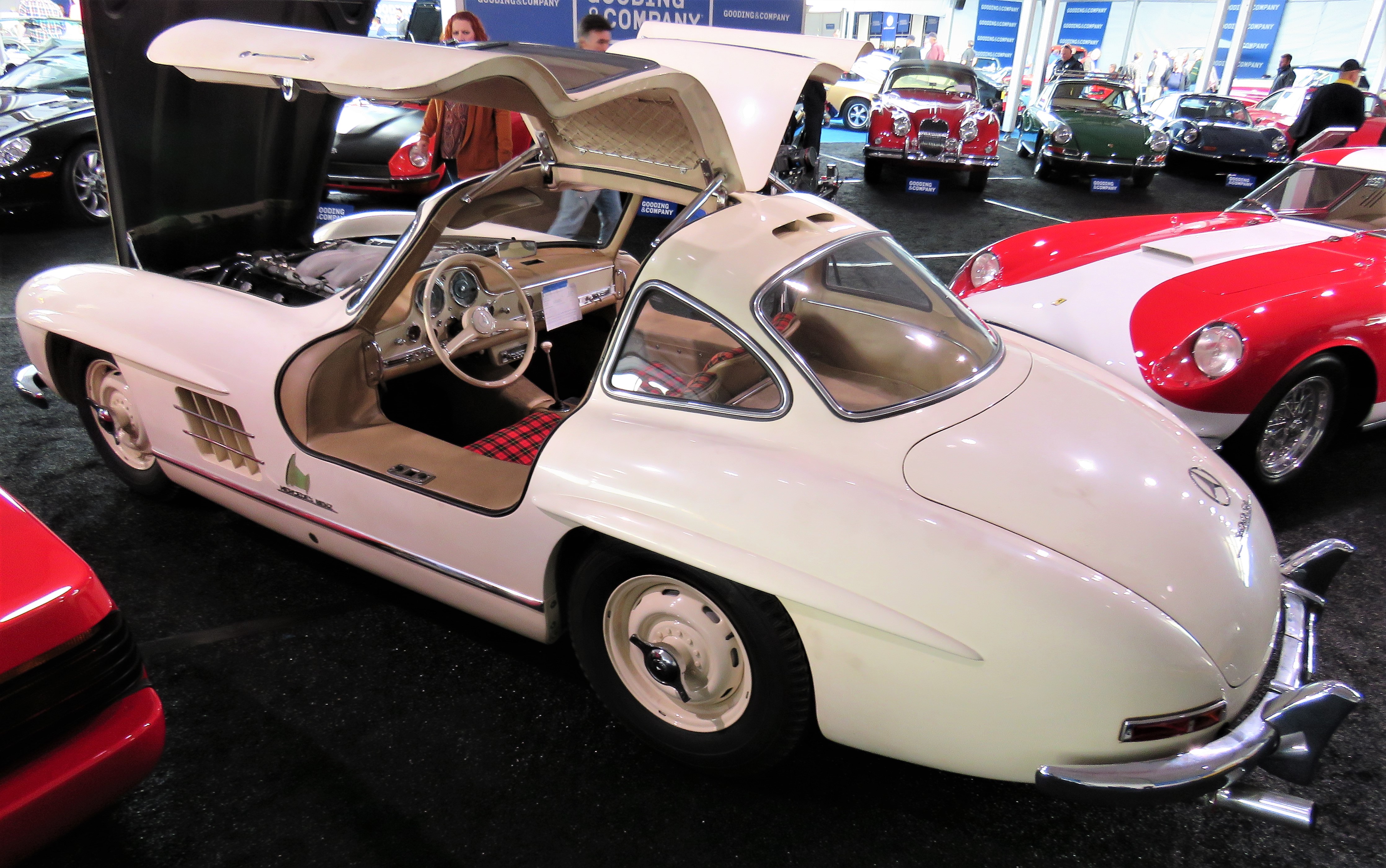 Gooding seems to have a knack for coaxing great cars out of long-term storage, and this incredibly original Gullwing coupe, hidden away from 1984 to 2018, has a marvelous patina that makes it a great candidate for sympathetic preservation. The numbers-matching SL has its factory-original and very desirable Rudge knock-off wheels, and tartan-plaid seats. Plus, it has highbrow celebrity provenance, originally owned by Herbert van Karajan, the famed Austrian conductor of the Berlin Philharmonic. 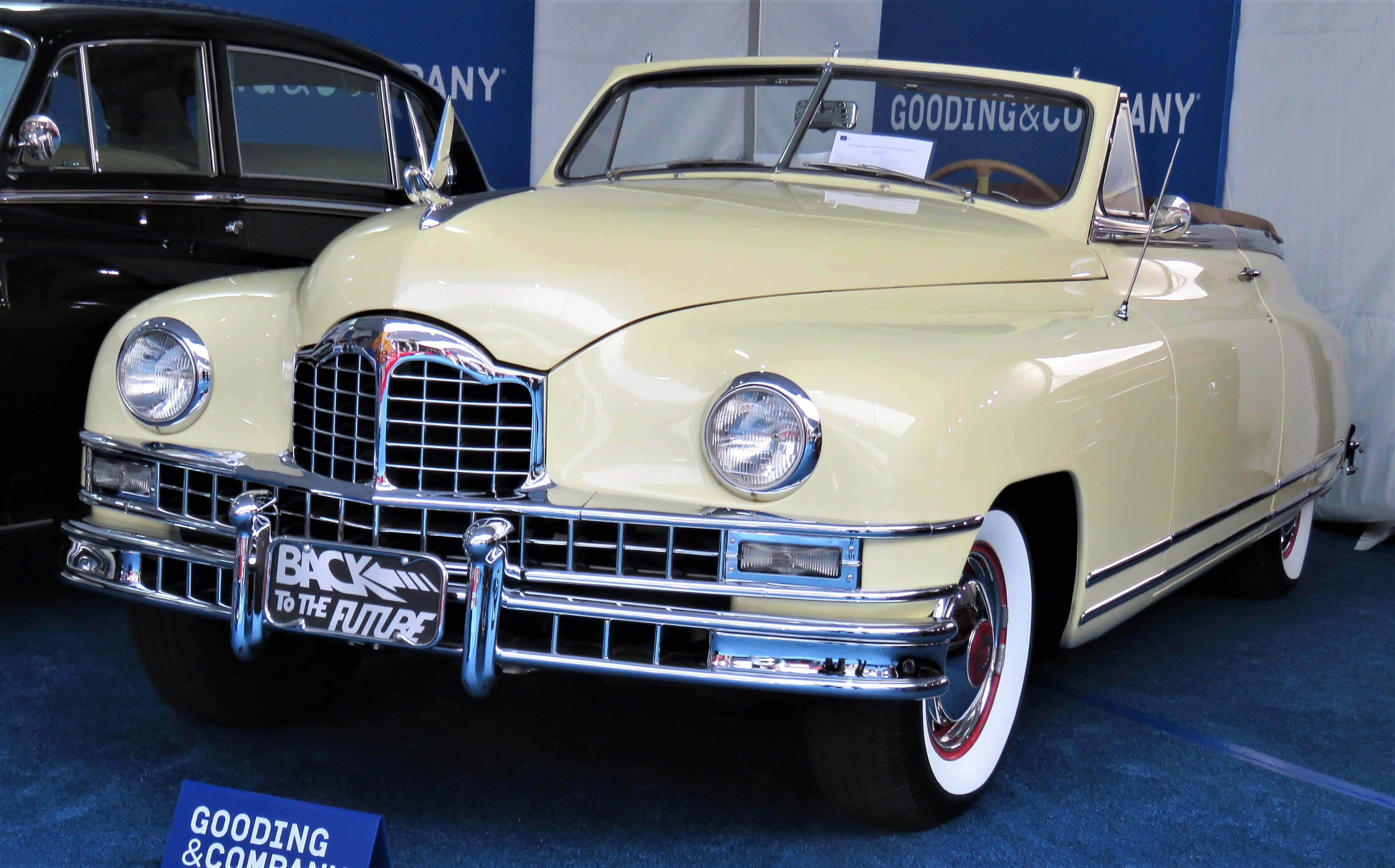 When you think of the film series Back to the Future, what car comes to mind? The DeLorean time machine, of course.  But here’s another one of Doc Brown’s automobiles, which had cameo appearances in all three of the movies, as documented by invoices and correspondence from Universal Studios.   I admired this lovely Packard even before knowing its Hollywood provenance, because who could resist such an appealing blast from the past. Now we get down to some serious business with one of the stars of the show, and arguably the most beautiful road-going Ferrari of all time. The numbers-matching coupe is the fourth-to-last SWB built and one of just 96 Lusso, or luxury, models.  It’s powered by a 3.0-liter V12 engine and stopped by a set of four-wheel Dunlop disc brakes.  It is amazingly impressive in person.  No wonder it’s valued at $6 million to $8 million. 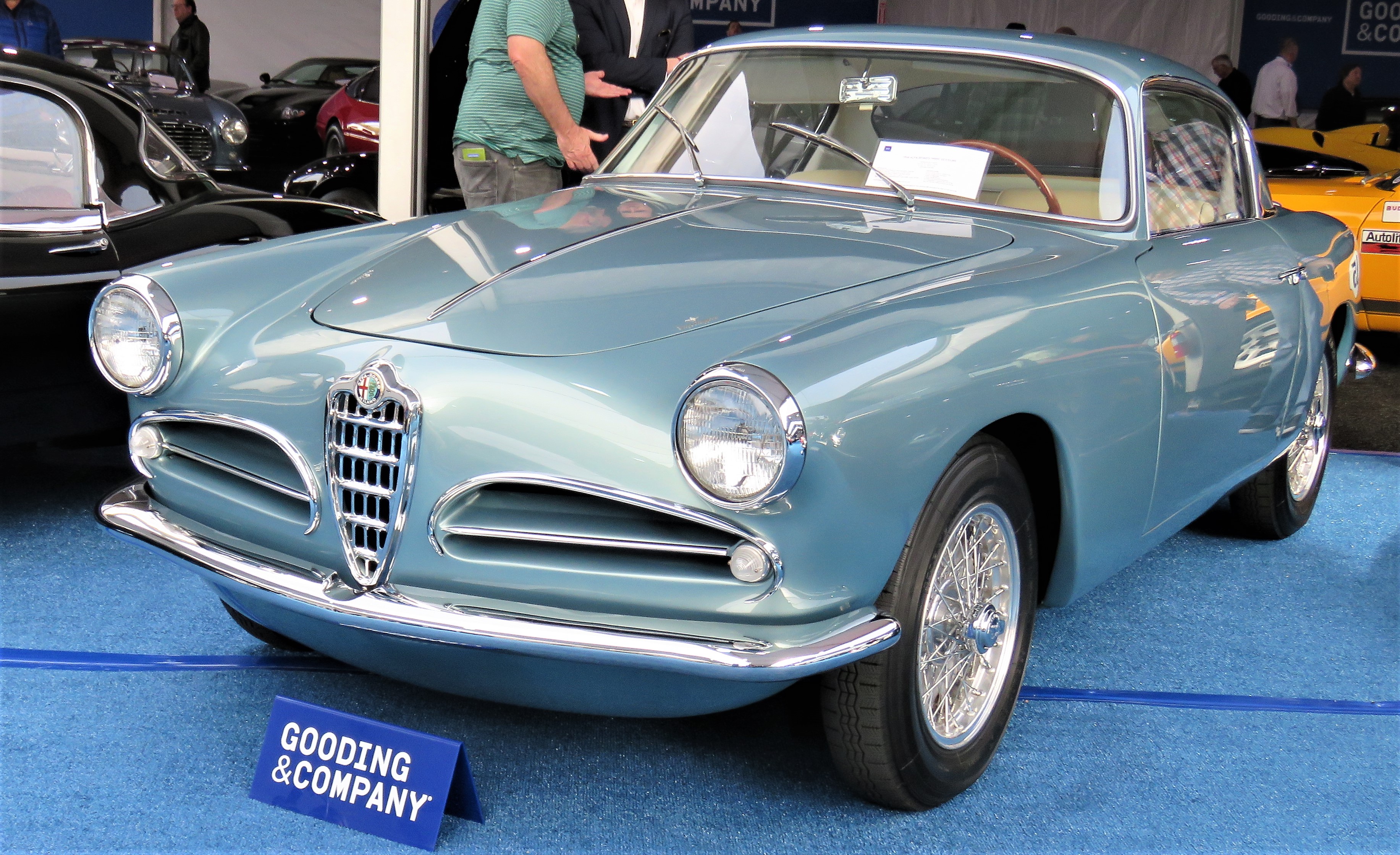 Here’s another beautiful Italian, and just somewhat more affordable than the Ferrari 250 GT.  With superleggera (super-lightweight) aluminum coachwork by Touring, this is one of Alfa’s last custom-bodied cars, built by special order for a client in Mexico.  It is also the only 1900 painted in this luscious shade of Verde Oceano.  Gorgeously restored to original, it has a sparkling presence. 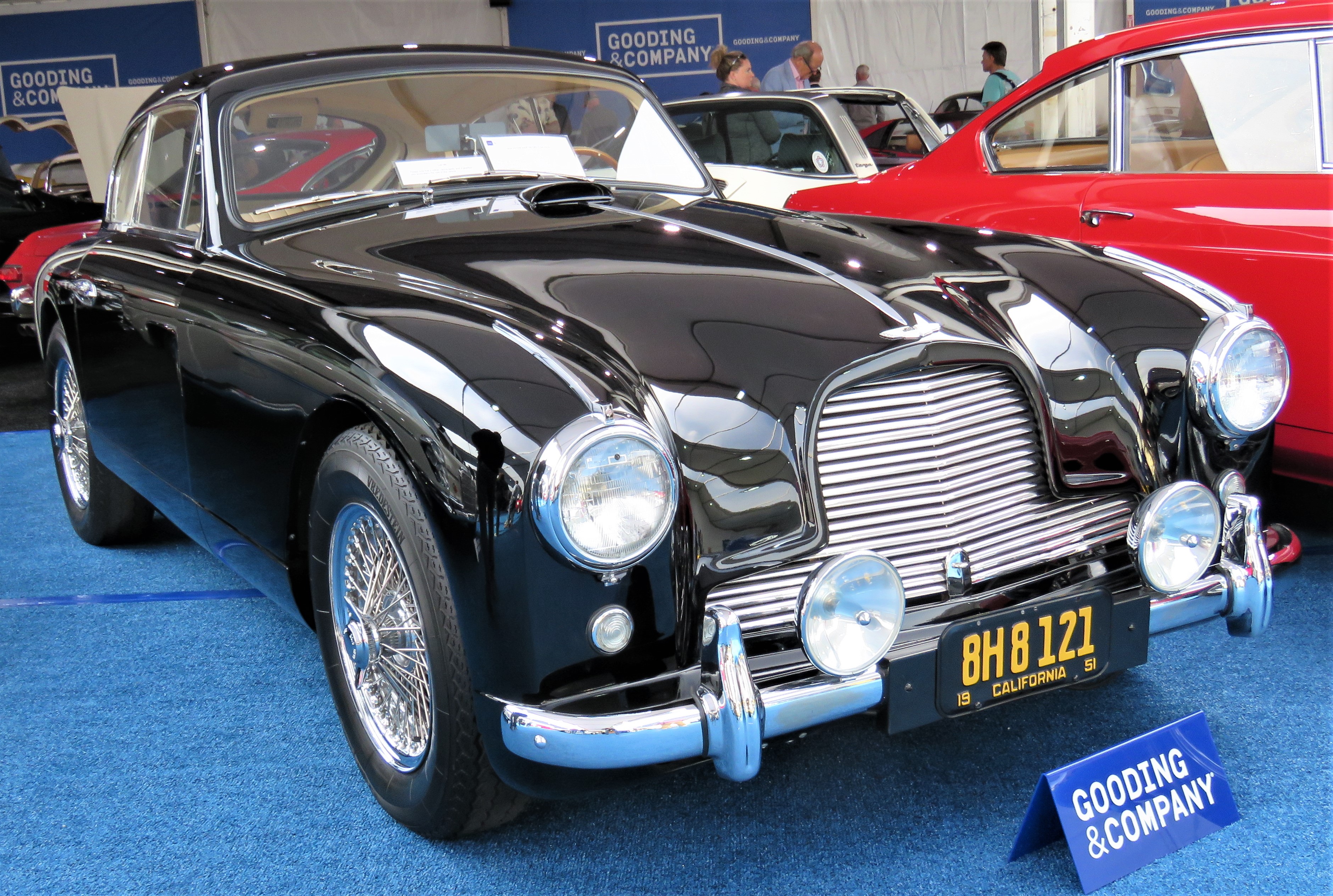 An early example of the DB series Astons, this saloon (the driving kind, not the drinking kind) shows the results of being very well-cared-for throughout the years.  The attractive two-door Brit with the evocative fastback roofline is fitted with a refurbished 2.9-liter version of the sport-tuned Vantage inline-6 engine and an updated gearbox. I would bet that it drives just as great as it looks. 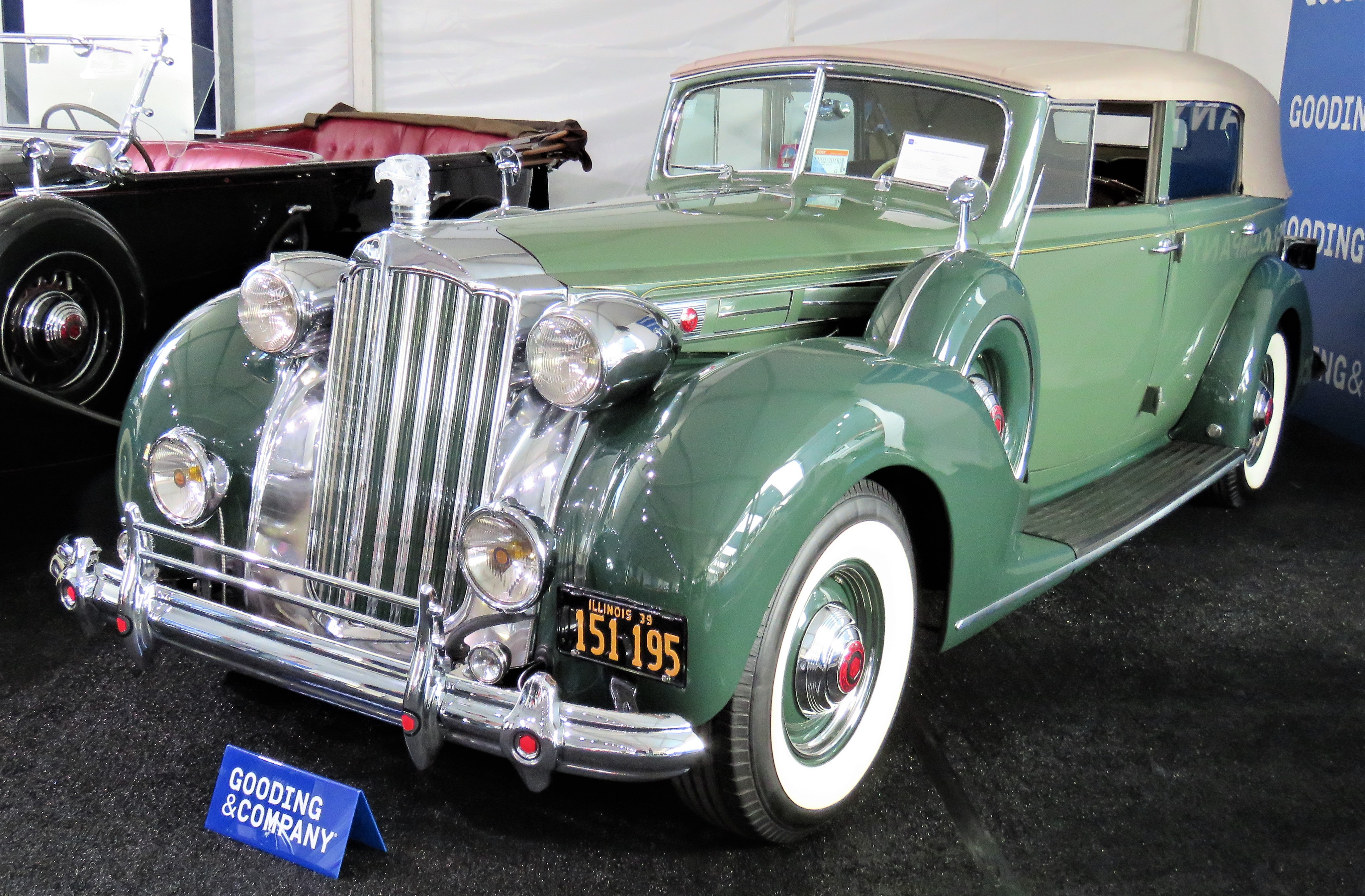 One of the auction’s picturesque pre-war Packards, this was the top-of-the-line production model for the luxury brand and the final year of the Senior Series cars. It’s also one of just four surviving examples known by the CCCA and the Packard Club.  The big convertible is a very impressive piece of work, with a V12 engine, wide chrome panels bordering its mighty grille and, most notably, a glass Lalique bald-eagle head mounted on its radiator cap.  Gorgeous interior, too. 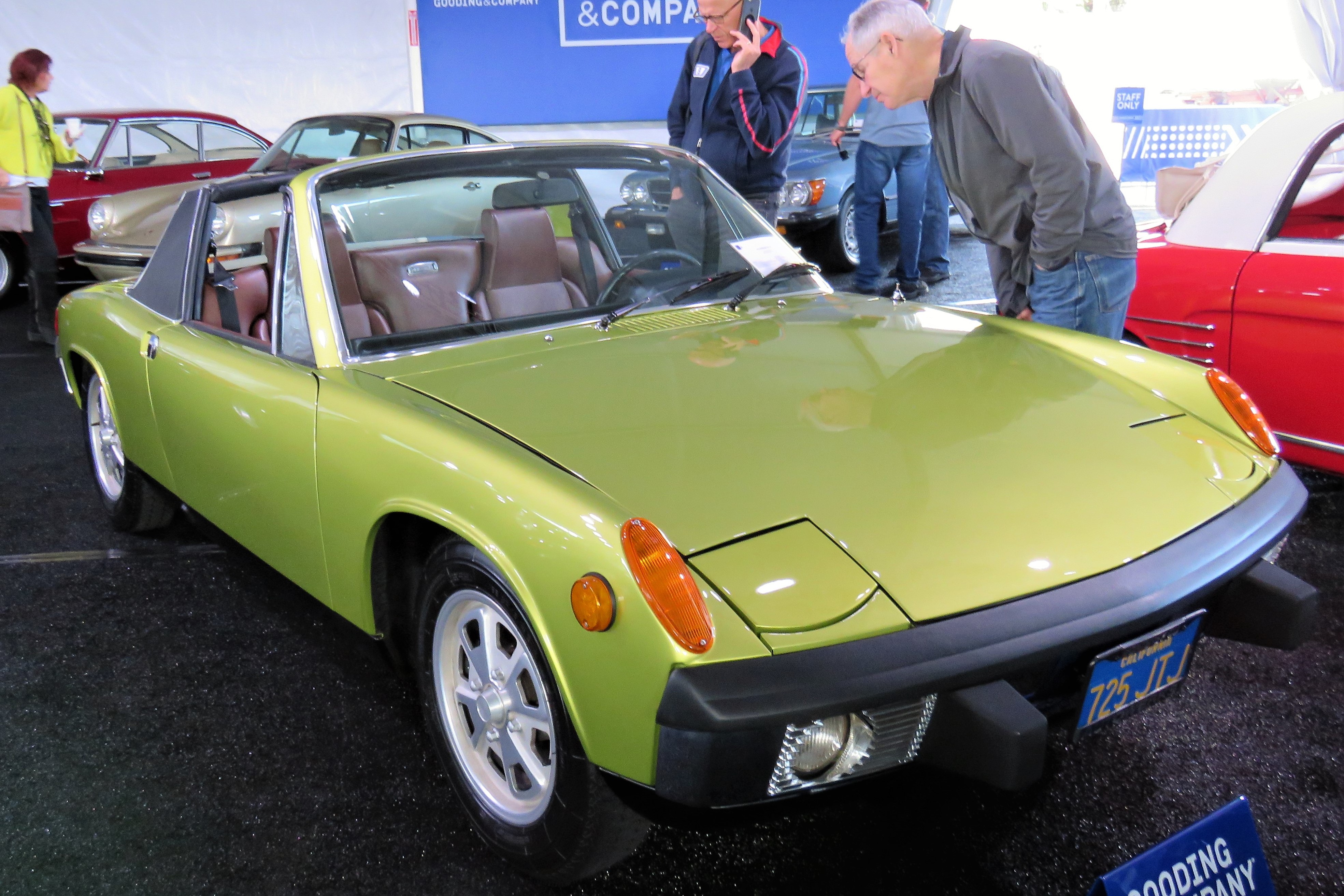 Not very long ago, these mid-engine Porsches were disrespected and would have had trouble securing a spot in any collector car auction, not to mention a highfalutin sale like Gooding’s. But these cool little sports cars have finally come into their own, still not terrifically valuable but at least accepted into the wider world of desirable collector cars.  In its rare and pleasing factory color of Delphi Green Metallic, this 914 attracted quite a bit of attention.  Best of all, it has a documented 33,000 original miles.  These cars with their nimble handling are a hoot to drive. 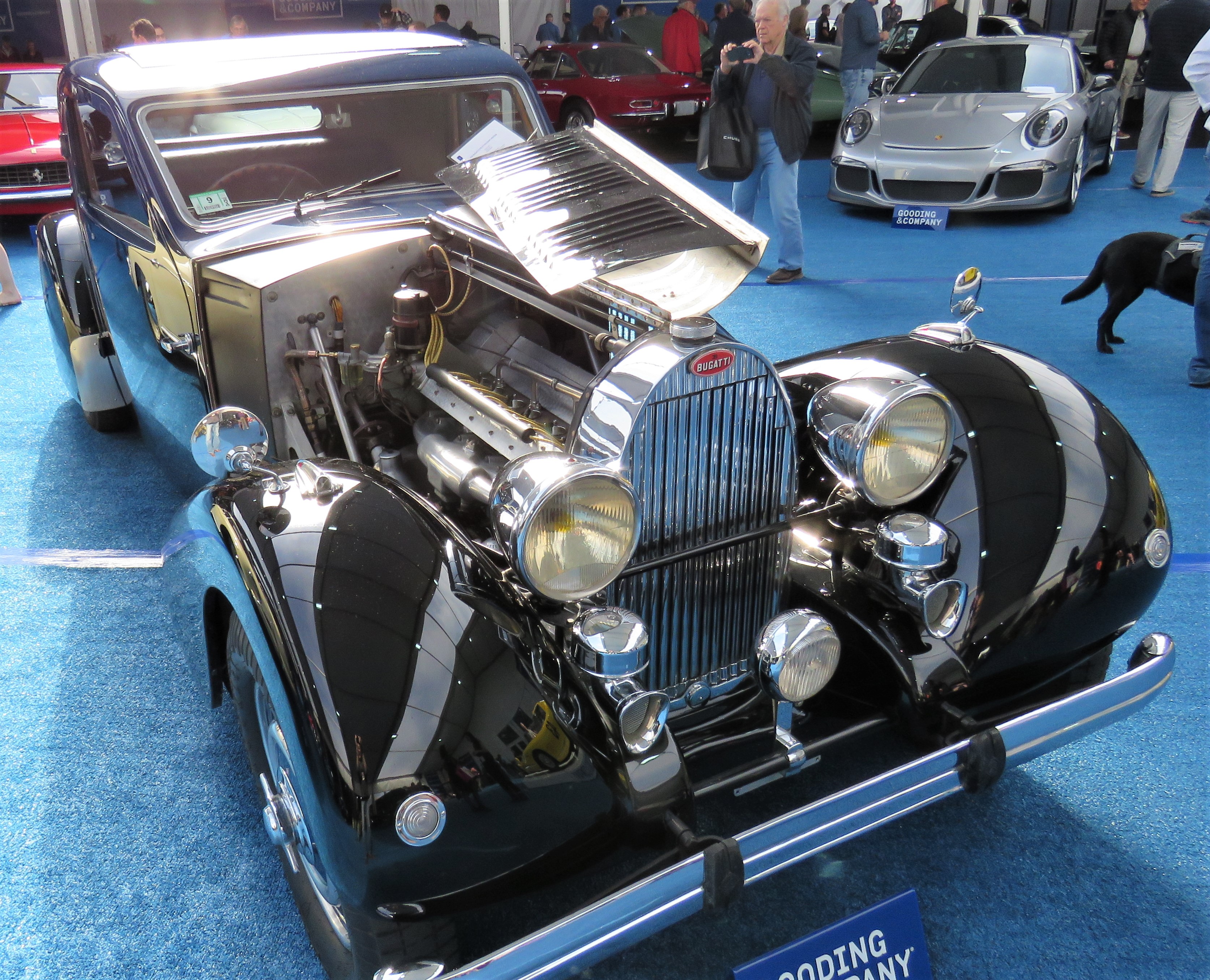 A pre-war classic star at Gooding, this fine two-door sedan displays all the goodness of Bugatti’s pre-war years, a passenger car brimming with grand prix racing bits and innovative features. And nothing can beat the appearance of these cars under the hood, with all the alloy cases and machine-turned trim. A totally captivating car, the Bugatti is valued at $900,000 to $1.1 million. 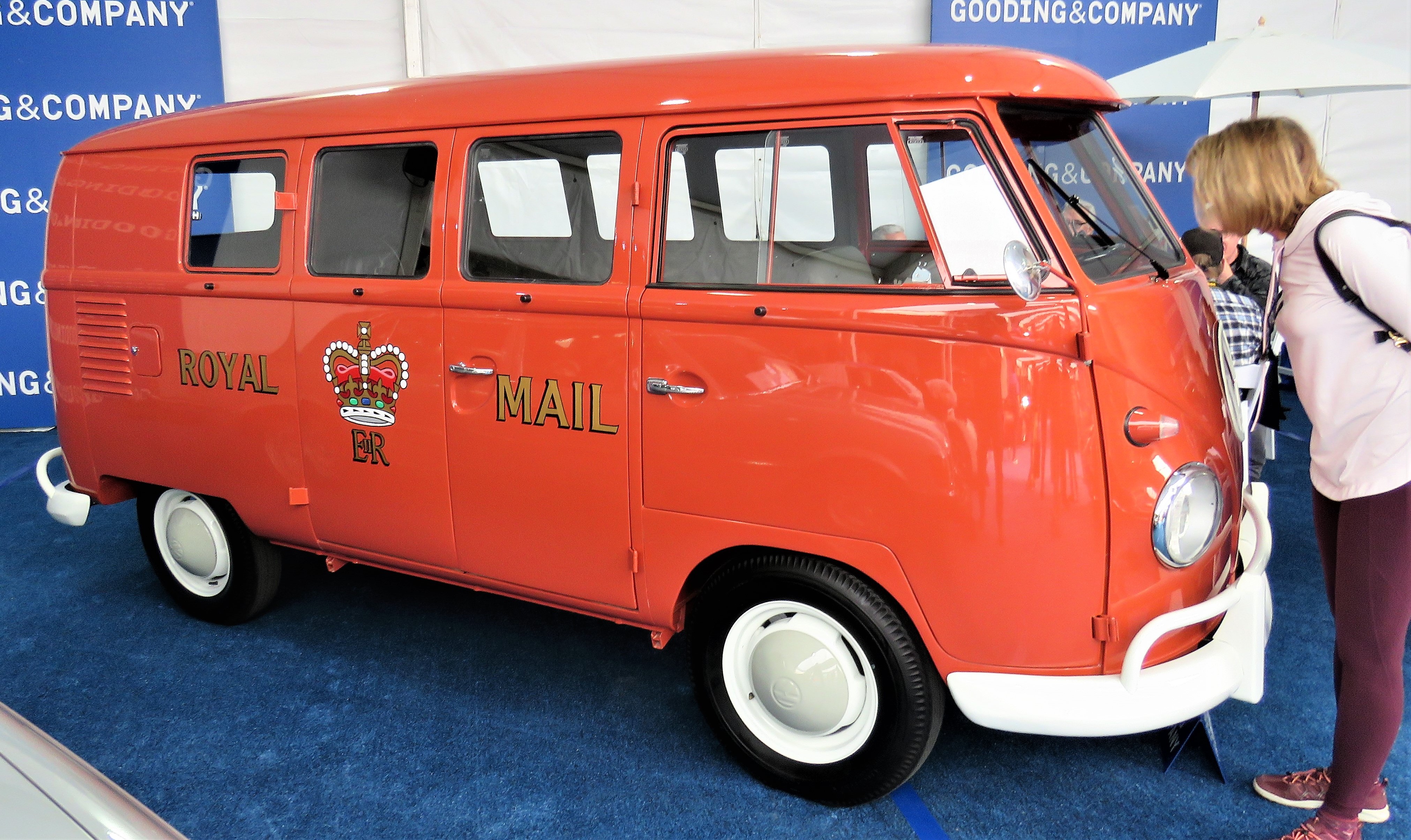 A handsome vintage VW, it’s also a rarity among microbuses, one of just 11 with the swivel-seat feature. What’s a swivel seat, you might well ask?  Why, it’s a driver’s seat that rotates for easy access.  Besides that, this bus discovered in derelict condition in a Canadian forest has been delightfully restored, including the theatrical addition of a hand-painted homage to the Canadian Royal Mail, including an authentic-looking crest.  A guaranteed attention getter at the next VW show.