The commitment to building the 1953 Chevrolet Corvette was a daring and exciting venture for the Chevrolet Motor Division. General Motors’ mastermind and chief designer Harley Earl was the right man at the right time in automotive history to make it all happen.

The idea was to capitalize on the interest and enthusiasm returning GIs had for those sporty little two-seaters they saw in Europe during the war. Plus, the Corvette’s reception at the 1953 Motorama was so positive, management knew they had to start production on the car as soon as possible.

Since the first-generation Corvette was a giant initial step into the world of modern American sports cars, it was impossible to do everything at once, so a relatively basic Chevy 6-cylinder engine from corporate inventory was used in the 1953 and ’54 models — just to get the concept-ball rolling, so to speak. 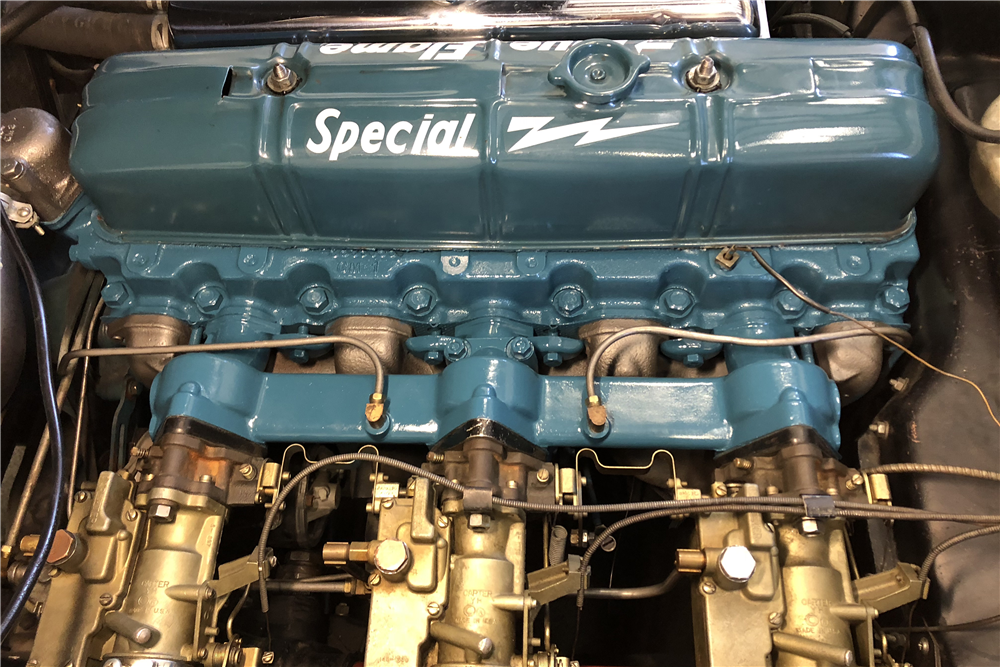 On the other hand, a concerted effort was made by the engineers to give this engine something different in the way of personality. They even added triple Carter side-draft one-barrel carburetors on a special aluminum intake manifold. The compression ratio was increased to 8.0:1 and requiring high-test gasoline. A special camshaft with higher lift specs than any other car company in town orchestrated the solid lifters and dual valve springs.

A dedicated Corvette cast exhaust manifold was installed that incorporated two separate outlets, one for the front three cylinders and one for the rear three, all in a single casting. From there, exhaust exited through dual pipes designed for less restriction and were the final phase in turning up the gusto on this inline-6 to the tune of 150 horsepower.

The Blue Flame 6 was backed up with a 2-speed Powerglide automatic transmission, but there was solid thinking behind that choice. Since the new Corvette was created to represent the future for GM, the most advanced automatic they had should be part of the package. A manual shift transmission was never considered in the beginning because it was so last-decade. Higher hydraulic line pressure was used in the Corvette version of the early Powerglide for the anticipated hotshots that would be buying these cars. It is designed to upshift from low to high gear at 4,500 rpm under full throttle. With the standard 3.55 rear end ratio, the car had a maximum top speed of 108 miles per hour. 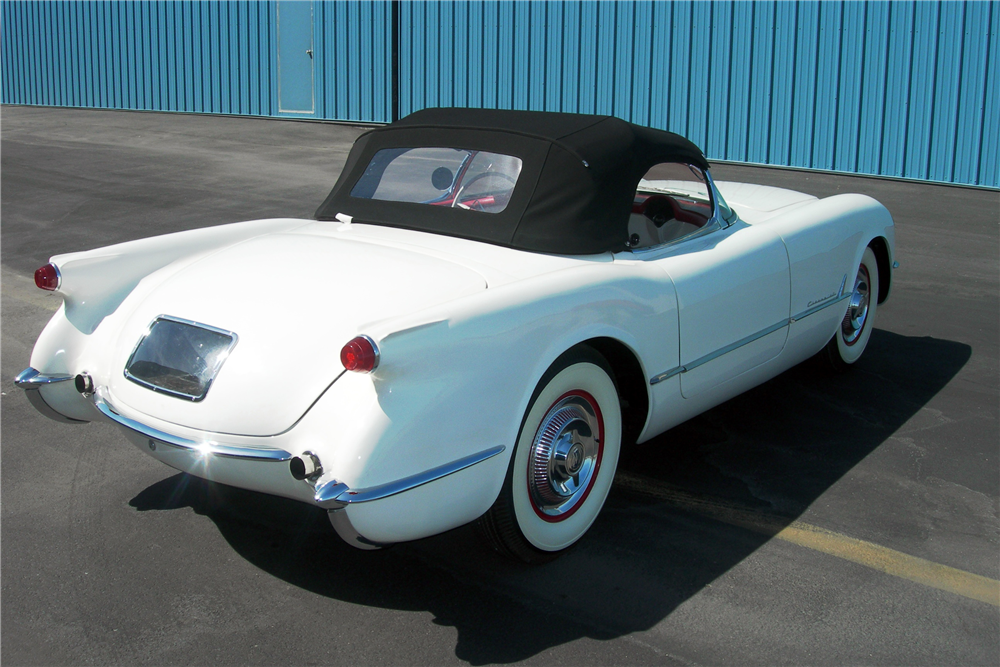 Presented in the only color combo offered, Polo White and Sportsman Red, this particular example is No. 290 of the total 300 hand-assembled units built that year. It’s the lowest annual production number in the Corvette’s history, not counting 1983 of course.

This first year Corvette, being offered with no reserve at the Scottsdale auction, retains its original hand-laid fiberglass body and components. Its engine codes verify this Corvette’s originality. Side curtains are original, complete and function as designed. The original spare tire is still in place. 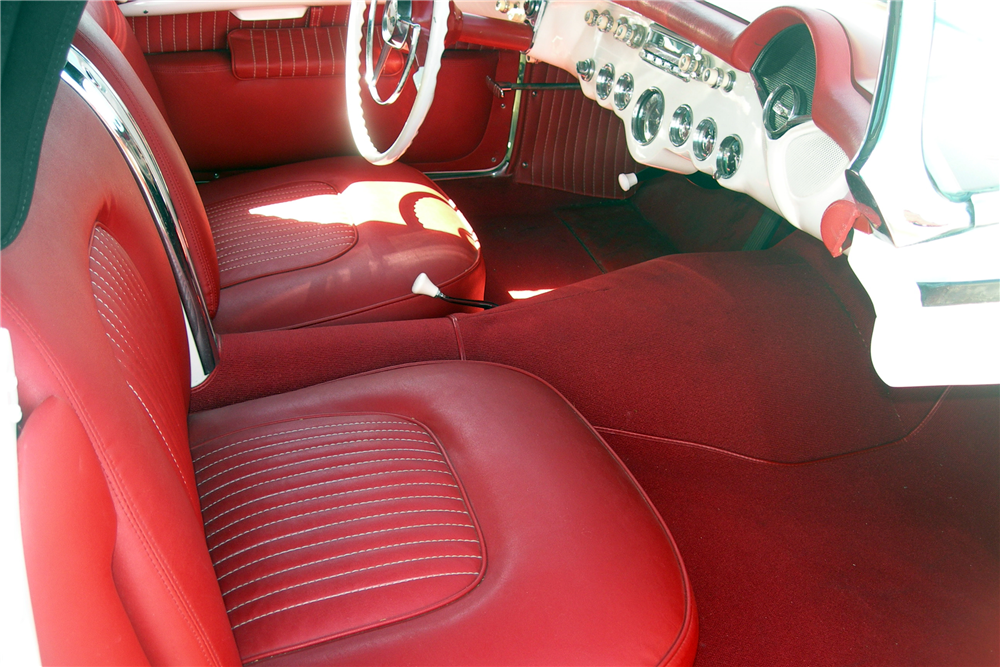 The car was restored in the late 1990s by then-owner Mark Martin of NASCAR fame. He displayed the car at the Mark Martin Klassic Auto Museum in the race town of Daytona Beach, Florida, until the facility closed in 2003. This desirable example has been in a private collection since 2008. Just last year the engine was given a valve job, the carbs were rebuilt, brake cylinders were upgraded to new and fresh Al Knoch seat covers were installed.

After six decades, this beauty is still looking as daring as ever. From its flowing, rounded front end and meshed headlight covers to its subtle space-age taillight fins, the original Corvette continues to prove it radiates a style that will never fade or grow old. 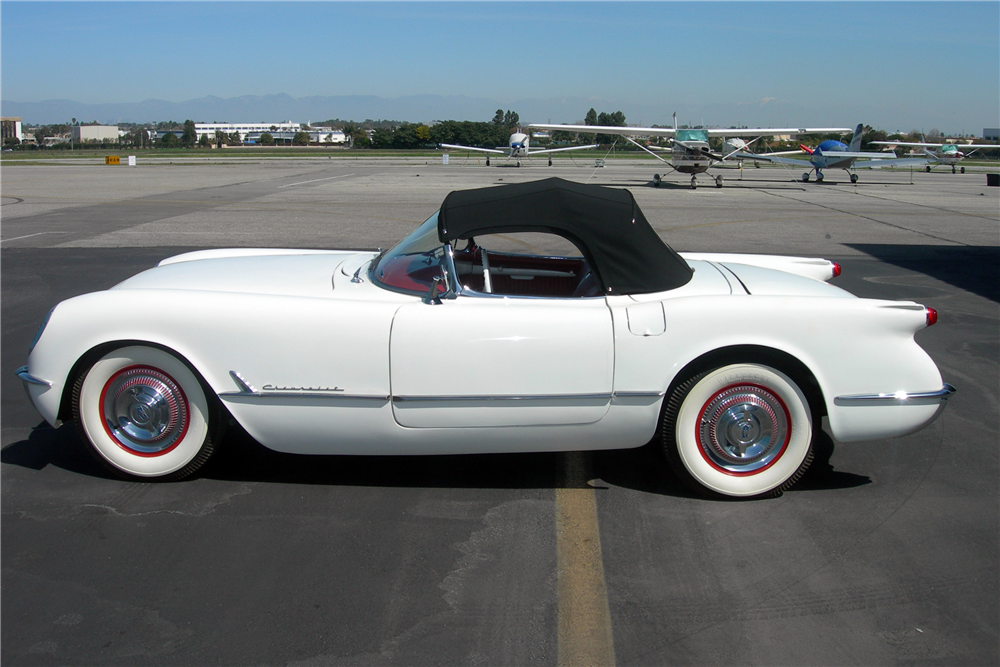 If you can’t stand not owning one of the all-time great collectible Corvettes, you are finally in the right place at the right time. After all, this is America’s first sports car, and it will never be mistaken for any other model on the road, as long as roads exist.