Oh, to have X-ray vision! Imagine being like Superman and roaming Metropolis with the ability to see through walls, busses, subway tunnels, rivers and anything else not made of kryptonite. Well, if you were at the 1964-65 New York World’s Fair, you wouldn’t need the Man of Steel’s eyesight to view the inner workings of Chevrolet’s revolutionary new Turbo Jet 396.

For sale at the 2019 Barrett-Jackson Scottsdale auction at no reserve is a genuine General Motors cutaway engine display that appeared before 51 million spectators at the 1964-65 New York World’s Fair.

Part of the General Motors Futurama Pavilion, this one-of-a-kind factory display piece is based on the hot, solid-lifter RPO L78 version of the 396. With 425 horsepower, the new-for-1965 L78 would become the most potent version of the 396 of all time and was only available as a factory option in the Corvette and as the L37 option in the Z16 Chevelle (slightly de-rated in the latter to 375 horsepower). 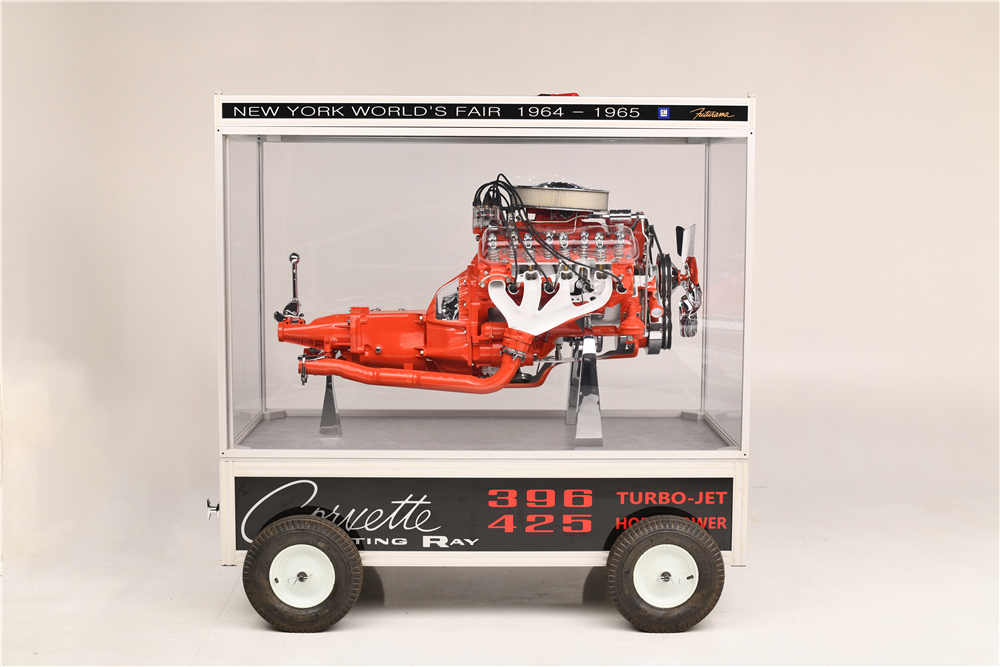 A 325-horsepower version of the 396 (RPO L35) was also offered to full-size Chevy buyers looking for trailer-towing grunt and cargo-hauling capability the 283 and 327 small blocks just couldn’t muster. Between them, the two 396s ushered in the era of the Chevy big block, and put an end to the reign of the 409 W-motor.

Detuned to 375 horsepower, the L78 (in a different casting configuration) continued in use until 1970 and was the highest-horsepower regular production option for the Camaro (the 427 was only available through the Central Office Production Order). By 1970, the 396 would spawn a 454cid variant, as well as a 402 cube version of itself, which continued to be marketed as a 396 despite the extra 6 cubic inches.

Specially constructed with surgical precision by technicians from General Motor’s show car and prototype department, external sections of every major component have been removed to give an inside look. The Corvette-specific L78 deep-sump oil pan has been “windowed” to give a view of the four bolt main caps, high-volume oil pump with extended pickup tube and horsepower-saving windage tray. 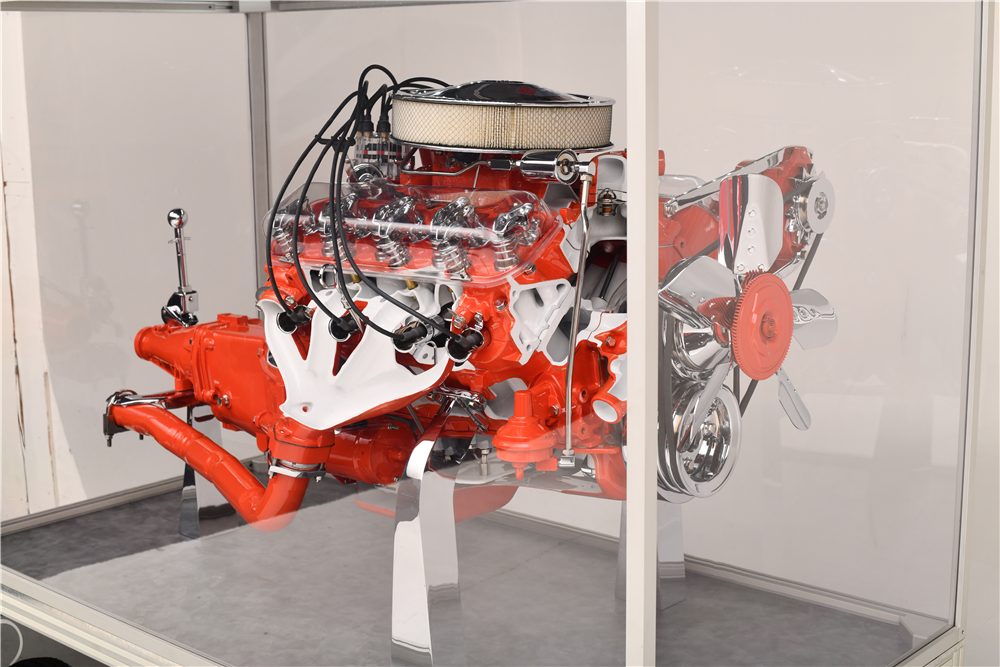 Perhaps the most revolutionary part of the big-block Chevy are its unique canted-valve cylinder heads. Unlike the previous 265/283/327 Chevy small block and 348/409 W-motor designs, which set the intake and exhaust valve movements in restrictive proximity to the cylinder walls, the new big block (also known as the “rat” and “semi-HEMI” by fans) tilts the valve guides so the heads of the valves move away from the cylinder wall as they open into the bore. This puts extra space between the outer sides of the valve heads and the bore walls to reduce shrouding and give superior breathing.

The idea was so effective, Ford borrowed it for its 385-series 429 in 1968. If Blue Oval fans can set aside brand loyalty blindness for a moment, they have to admit the similarity of the two designs. 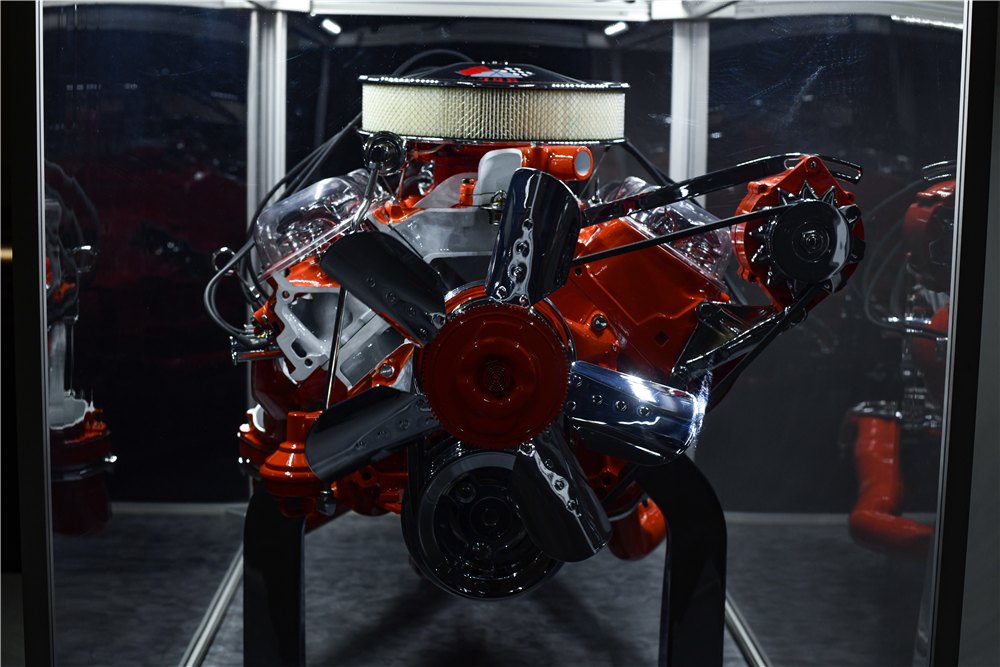 Under the exclusive clear plastic valve covers, the cause of the 396’s “porcupine” nickname is on display. At the other end of its canted valves, the tips and valve springs protrude outward in numerous directions, like the quills of a porcupine. The stud-mounted rocker arms, double valve springs, heavy-duty retainers and pushrods are all presented with bright chrome plating for eye appeal and corrosion resistance.

Best of all, Chevrolet designed this cutaway display engine to function. The electric starter motor — ordinarily called into action for 20 seconds during startup — runs full time and sets the crankshaft, pistons, camshaft, lifters, rocker arms and valves in motion just like a real engine, only slower for easy viewing.

Attached to the tail of the 396 is a Muncie M21 four-speed manual transmission. Like the engine, the bell housing has been surgically altered to reveal the L78 specific heavy-duty flywheel, clutch and pressure plate. A show-quality coat of Chevy Orange adorns the engine and transmission. Other fine details include a clear plastic distributor cap that allows viewing of the L78-specific breaker-less distributor included with the mandatory K66 transistorized ignition system. 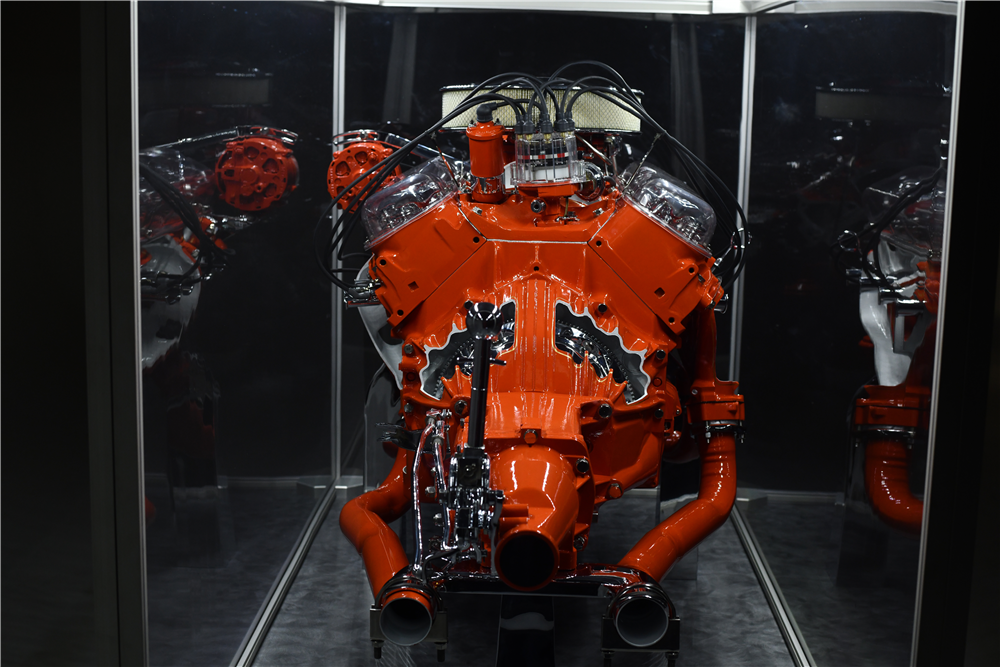 The 1964-65 New York World’s Fair was not open yearround. Rather, it ran for two six-month seasons. The first ran from April 22 to October 18, 1964, and again from April 21 to October 17, 1965, when it closed for good. When active, the fair contained more than 140 pavilions, involved 80 nations and 45 corporations to showcase mankind’s greatest achievements to an audience of over 51 million spectators.

Part of the exclusive collector realm of factory auto show prototypes, smart investors appreciate these artifacts for their scarcity, mystery and corporate origins. From the same World’s Fair display, a Corvette Sting Ray cutaway car sold for $1.1 million at the 2018 Barrett-Jackson Scottsdale auction. Why not add this significant gem from the birth of the Chevy big block to your collection?