I bought my 1954 Ford F100 from my grandfather and my namesake, Abe Flory, in 1977. He bought it new in December of 1954 from Kreider Motors in Manheim, Pennsylvania. I have the original bill of sale.

Grandpa used it hard on his Lancaster County dairy farm. He retired and moved off the farm and sold it to me in 1977 when I needed a vehicle to get to college classes that summer.

I had the engine rebuilt in 1979. I used it as a truck and a daily driver for many years. In 1999 I got the body fixed and painted. If I hadn’t it would have rusted away to a basket case. 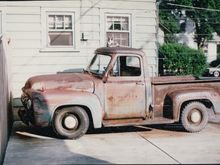 In the “before” picture you can see rust marks on my driveway which would be left there after a rain. After getting the truck restored and looking respectable I continued to use it as a second car for my family and as a truck, hauling brush, mulch, and mowers.

I got a new bed for it and had the truck repainted in January of 2016. At that time I also fixed my original seat and had it reupholstered with NOS 1954 fabric. I also got the engine detailed last summer.

Question of the Day: Would you buy a Ford?