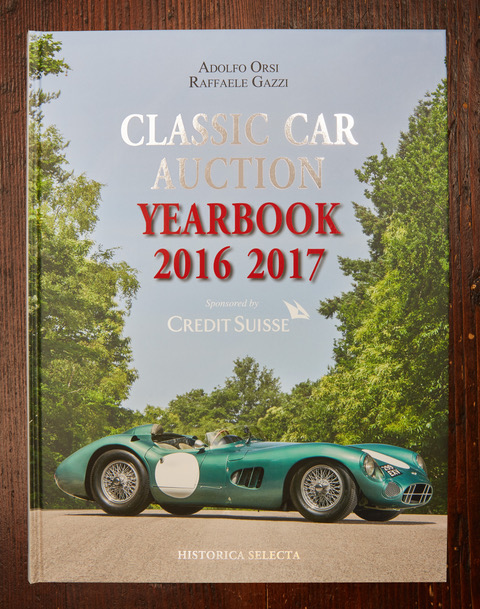 The calendar is nice and neat and all, but it seems so arbitrary in assigning when one year ends and the new one begins. After all, there are national and religious calendars, even fiscal calendars, and each with its own rationale.

For some, especially those with a poetic bent, what signals a new year and optimistic new beginning are the first green shoots pushing through the warming soil or the first buds on the fruit trees.

For others, and especially for the collector car community, what signals the start of a new year is the arrival from Italy of — no, not a new Ferrari or Fiat — but the Classic Car Auction Yearbook, with authors Adolfo Ori and Raffaele Gazzi setting the end of each year at the conclusion of the auction week on California’s Monterey Peninsula.

“The collector’s car market has never seen so many clients enamored with the biggest invention of the 20th century. The invention that changed our relationship with distance, and allowed us to travel independently.”

When the last gavel has fallen on those sales, the authors, with underwriting support from Credit Suisse, launch into crunching numbers and building charts and asking some experts to join them in reflecting on what has taken place in the collector car marketplace in the previous 12 months.

Then they put it all together in a yearbook format that spans more than 400 pages, with details on more than 4,000 cars — this past year, 4,269 to be precise — sold in at major auctions from the Labor Day weekend sales at Auburn, Indiana, and to those taking place that same weekend in Europe, to the last sale at Monterey, and with all of it ready for distribution by the end of what the Gregorian calendar calls October.

While the book’s focus is on the top of the market, the analysis applies as well to the not quite as glamorous portion of the auction iceberg.

Consider, for example, the words of Matthieu Lamoure of Artcurial Motorcars:

“At a time when the authorities in many countries around the world are calling for the end of combustion-engine powered vehicles by 2040, or even 2030 according to some, the collector’s car market has never seen so many clients enamored with the biggest invention of the 20th century. The invention that changed our relationship with distance, and allowed us to travel independently.”

He notes that after some speculation-driven price increases that brought in those looking for a quick buck — whether individuals, dealers or even new auction houses — the marketplace has “regulated itself and ironed out price inconsistencies.” Lifelong enthusiasts are back in charge, he contends, and with them come more realistic pricing.

“In short,” adds Philip Kantor of Bonhams, “ ‘sanity’ has returned to a market which is still commanding high prices for top items… This stabilization is truly good news not only for real enthusiasts but also the market in the long term.”

Buyers are in control, adds Augustin Sabatie-Garat of RM Sotheby’s. As evidence, Kantor offers the increase in lots offered at no reserve, “leaving it up to the market to decide on the price of the day.

“More and more frequently, lots are hammered below the estimate range as buyers want to leave the venue with the feeling of having made a purchase that was a good deal,” he noted.

Sabitie-Garat sees yet another reason for optimism in this marketplace: “Unlike other markets such as stocks or bonds,” he writes, “it is our passion for cars, the underlying assets, that drives us.”

So what is the state of the collector car auction market as we start the next cycle: 2017-2018? Several statistics shared in the Yearbook are telling:

“The new generation of buyers arriving at a fast pace.”

While the decline in prices appears to have stabilized, there’s yet another reason for optimism in the Yearbook charts: The average year of manufacture of the cars has moved strongly forward, making a five-year jump to 1966 in just two years.

While the progression should be one model year per calendar year, what this sudden surge likely indicates is the young buyers coming into the market.

Lamoure notes “The new generation of buyers arriving at a fast pace and (so are) interesting in newer cars. The 1980s/1990/2000s have a great future as collector’s items,” he adds.

Regardless of bureaucrats and the push for electrification, Lamoure contends, “The collectors’ car remains and will remain, an object of fascination and passion. This industrial art, our heritage, that we continue to promote in our sales, is not ready to leave our roads or our lives!”