How Steinbeck’s search for America led me back home

On the way home from Monterey Car Week, and since we had to drive through Salinas, California, anyway, Bob Golfen and I decided to visit the National Steinbeck Center. Bob had read seemingly all of Steinbeck’s books. I consider the Grapes of Wrath to be the Great American Novel. Plus, I was curious what sort of displays they’d have in a museum devoted to a writer.

Basically, each of Steinbeck’s books has been transformed into a home-sized exhibit full of artifacts, such as a Model T Ford and a Hebrew-inscribed replica of the wooden box in which Steinbeck kept the manuscript from East of Eden.

The last of the exhibits features Travels with Charlie, Steinback’s epic In Search of America road trip taken with his dog riding along in a GMC pickup truck topped by a camper he named Rocinante, after Don Quixote’s horse.

I looked at the big wall-size map that traced those travels, and then made my way across the room to where the truck and camper are parked behind tall sheets of protective plexiglass. I looked inside the camper (the back door is open for viewing), and I took a couple of photos.

But it was the next thing I saw that nearly knocked me to the floor. On the back of the camper, there’s a metal sign that reads, well, take a look at it for yourself: 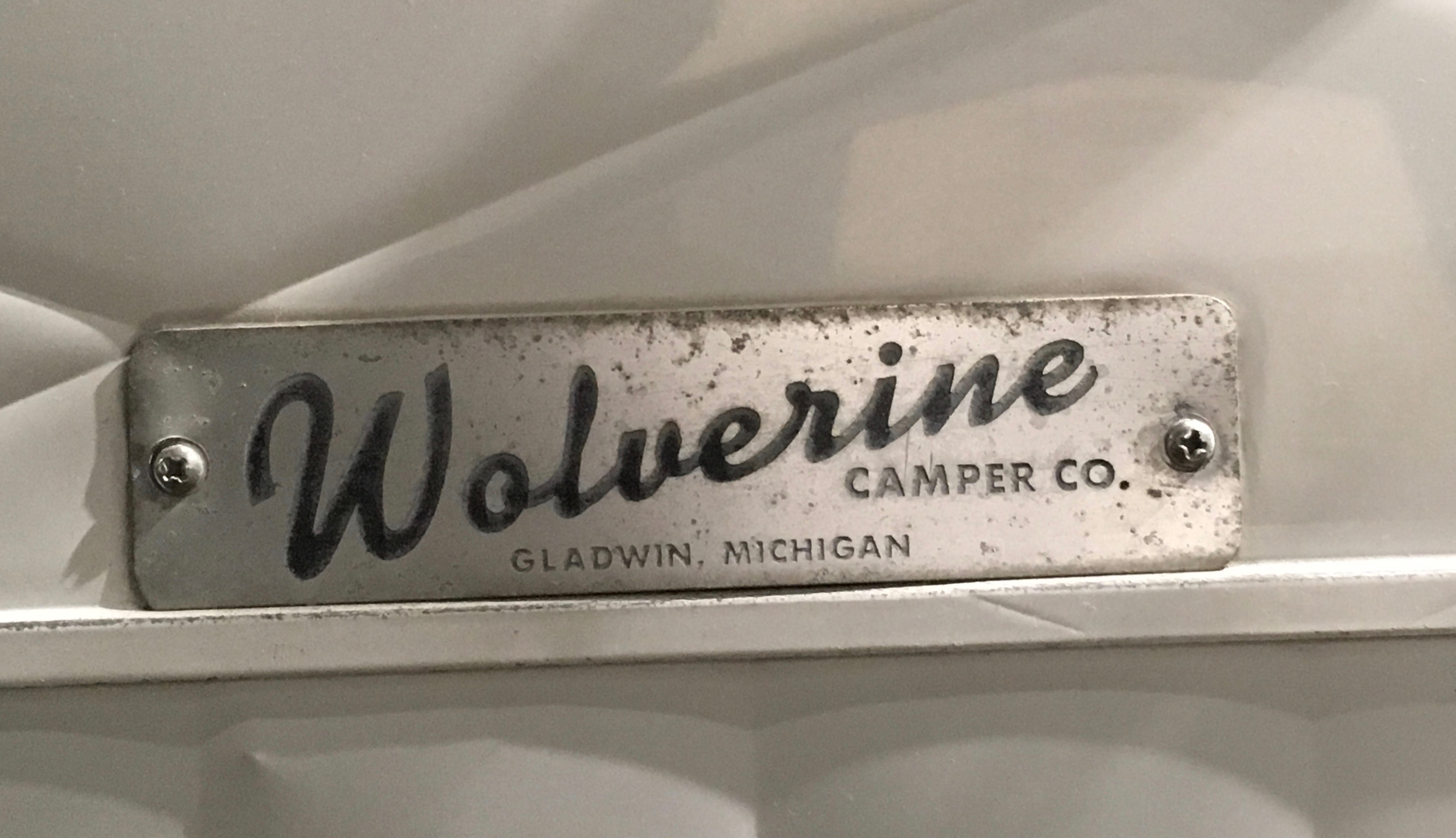 Gladwin is a small town in northern Michigan. It also is where, for the last several years, my laptop and I have spent summers, escaping the triple-digit heat of the Arizona desert and enjoying the river view from an old house on the grounds of Cedar River Lodge, a friends-and-family campground owned by my oldest daughter and her husband.

While I have come to feel right at home in Gladwin, I’d never heard of the Wolverine Camper Co., but I planned to remedy that as soon as Bob and I drove back to Phoenix, and I flew back to the Midwest.

A web search didn’t turn up much information, though it appeared that Wolverine still exists. An address and telephone number were listed. It turned out that the address was incorrect, but Howard Smith Jr., son of the owner, called me back to say the location was north, not south of town. He also confirmed that Wolverine had built the camper used by Steinbeck, and also the one ordered by “the other writer.”

In conjunction with the 50th anniversary of Steinbeck’s trip, retired newspaper editor John R. Olson bought at GMC pickup, ordered a Wolverine camper and set out to follow Steinbeck’s route, albeit starting near his home in Washington State and working backward from Steinbeck around the country. Olson also traveled alone, leaving his dog, Zorro, at home.

Olson named his camper Gabilan, the name of the horse in Steinbeck’s The Red Pony.

Olson’s book is titled Down John’s Road: Recreating John Steinbeck’s 1960 American Road Trip. However, much had changed in 50 years. When Smith Sr. was a youngster working at Wolverine, the company was based in downtown Gladwin and had a contract to supply campers to General Motors dealers for installation on pickup trucks like Steinbeck’s GMC.

Now, Smith Jr. said, he and his father build only a handful of units each year, though they also sell and service various recreation vehicles from the building that used to house the shop where Wolverine made frames for trailers.

On the other hand, some things may not have changed all that much since Steinbeck did his drive.

“I do wonder whether there will come a time when we can no longer afford our wastefulness — chemical wastes in the rivers, metal wastes everywhere, and atomic wastes buried deep in the earth or sunk in the sea,” the Nobel and Pulitzer prize-winning author wrote in Travels with Charlie, where he also wondered “why progress looks so much like destruction.”

And in contrast to the nation’s increasingly hurry-up lifestyle, which he already lamented by noting that on interstate highways, it would be possible “to drive from New York to California without seeing a single thing,” Steinbeck wrote that, “I drove as slowly as custom and the impatient law permitted. That’s the only way to see anything.”

Steinbeck did no writing on his trip. A novelist, he noted that he couldn’t write until everything had had a chance to ferment. Not Olson. He was a newsman who wrote daily, focusing on the trees rather than the forest. Yet both had things to say about the country and its people.

Perhaps it helps to see if your vantage is from the cab of a GMC pickup with a Wolverine camper mounted in its bed.

Can a classic car auction generate more income in a weekend than a new car dealership does in a year?