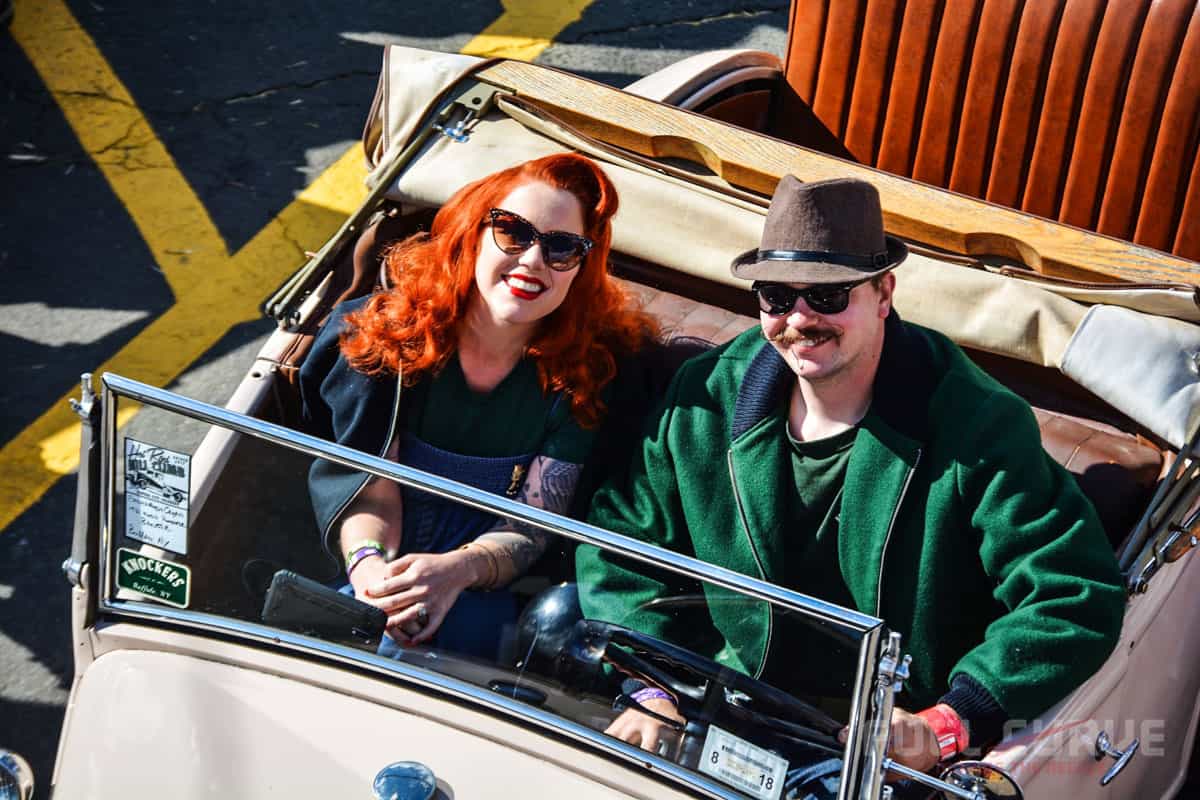 The Hot Rod Hill Climb has accelerated to must-attend status for early hot rod enthusiasts. It’s on par with the Goodguys West Coast Nationals, the Grand National Roadster Show, Detroit Autorama, SCTA Speed Week, The Race of Gentlemen and other “Gotta be there” hot rod happenin’s. Held in scenic Central City, Colorado, it embodies everything an early hot rod event should be – great cars, cool visuals, retro themes and tons of fun. Put it on your bucket list. Originally, the Hot Rod Hill Climb was known as the Georgetown Hill Climb. It was first run in 1953 then again ’54 as kind of a competitive nod to the Denver sports car clubs. As it turns out, local sports car enthusiasts had run up the dirt switchbacks leading to the top of Leavenworth Mountain just outside of the quaint mountain town of Georgetown, Colorado in 1952, touting just how quickly and well they had done so. The hot rodding community wasn’t impressed and in a show of their abilities, local enthusiasts led by a handful of clubs and timing associations headed to the base of the mountain in 1953 to run the exact same hill the sports car guys had, but with quicker times in mind. And that’s exactly what they did– besting the sports car club times by notable margins. In 1954, the rodders did it again. Unfortunately, this was the last time the Hill Climb was ever to be run, or so it was thought.

Over 50 years later in 2010, a man named Mike Nicholas came across an article about the original event in a March 1954 issue of Hot Rod Magazine, which came with the 1950s-style Shoebox Ford he had recently purchased to restore. This would turn out to be the best thing to happen in the history of the Hill Climb since its initial running. With a major passion for traditional hot rods and a group of amazing people behind him, Nicholas kicked off the first revamped Hot Rod Hill Climb in 2013, celebrating the 60th anniversary of the original event. About 40 cars and 100 or so spectators showed for the celebration. This year, nearly 150 hot rod roadsters, coupes, trucks and other contraptions came from around the country to climb and party. The streets were flooded with enthusiasts providing great energy. The weekend kicked off with a bang on Friday, September 15. As is tradition, the event started with the Reliability Run with participants driving their gow jobs nearly 100 miles through mountain roads collecting passport stamps at designated stops along the way. This year’s turnout was larger than it’s ever been before. Friday night, rodders checked in, had their cars teched and joined the festivities at Charlie’s Bar for the official VIP Kick-Off Party. By Saturday morning, hundreds of spectators and racers alike filled Central City, from the pit area to Main Street where a number of impressive hot rods and classics were on display in a show & shine. Opening ceremonies for the main event kicked off at 9:30am, starting with the singing of the National Anthem and special flag presentation, followed by the running of the special “poster vehicle” known as Odd Rod (it gets it’s “odd” title mostly from it’s dual-engine setup) and legend Cal Kennedy’s T-33 roadster up the hill prior to the official flag drop. At 10am, the first racer hit the hill. Racing lasted all day with rodders making several runs apiece – one of the perks of the event moving to Central City last year. If you weren’t racing, there was plenty of hot rod lifestyle activities happening with live music, vendors and local eateries to be explored. At 5pm, the awards ceremony commenced on the band stage in the middle of Main Street, with awards handed out to rodders for best rides, picked by various local and out-of-state car clubs. Longest journey went to a couple from Ontario, Canada. The Worst luck; and most Hot Rod Hill Climbs, went to legend Cal Kennedy who raced in the original 1950s hill climbs and all of the revamped events since 2013. Honors were also given to Mike Nicholas and his wife Amy, Mike’s dad “St. Nick” and all of the Roosters, who run the pits and the starting line for the event each year. When awards were done, it was either homeward bound or back to hotels and camping spots to get ready for the Hop-Up Magazine after party. On Sunday, the event finished with a cruise up the Peak-to-Peak Highway for Brunch in Estes Park.

Mike Nicholas and his volunteer army have recreated one of the most unique hot rod events in the country putting their spin on an old classic. The cars, the speed runs, the friends, the hoopla, the cruises and the comradery binds everyone together like family. Get in on the action guys. It’s a time capsule.

This article, written by Lindsey Fisher and was originally published on Fuel Curve.