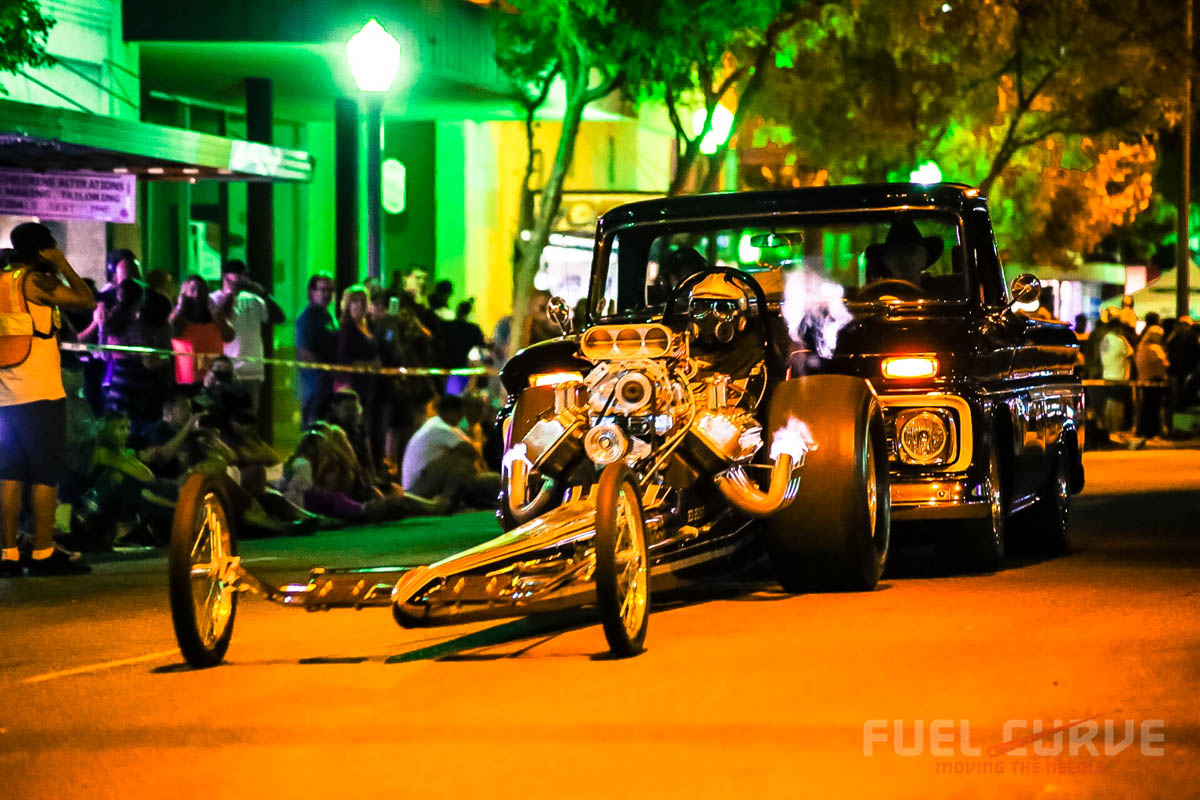 Nitro Night, part of Cruisin Grand in downtown Escondido is one of the most anticipated events of the year for vintage top fuel dragster guys and gals. The rich history and excitement of Southern California’s drag racing glory years are relived at several signature events throughout the summer but none have the landscape of Nitro Night. Held on Grand Ave between Juniper and Broadway Streets (about a quarter of a mile east of the I-15), the entire city of Escondido gets involved by blocking off the streets, setting up barricades and stocking their eateries in anticipation of the night of flame and fury. Fittingly, it is the last “Cruisin’ Grand” event of the year. Celebrating its 16th anniversary a few weeks ago, Nitro Night delivered yet again with flame-belching diggers, altereds, and streets full of custom cars and cruisers. Nitro Night is the only place on earth where you’ll see dragsters idling and cackling after dark on city streets! The close proximity to the action allows fans to truly get a sense on how these dragsters sound and smell. There is also an entertainment stage and hundreds of hot rods and customs on display. Fans leave happy year after year.

The brainchild of Steve Waldron, Cruisin Grand launched in 2000. Waldron grew up cruisin’ Grand Ave in the 70s and was convinced as he became a street rodding elder statesman that Grand Ave was the perfect venue for a cruise night. He met with city officials who were behind the idea. Soon, the police department jumped on board and Cruisin’ Grand was born. As attendance began to increase, hot rods flooded the streets. The event accelerated into such a popular gathering, theme nights were developed. One of those themes? You guessed it, Nitro Night! The vintage dragster community got involved and soon after, the early stars of NHRA’s Cacklefest events flocked to Grand Ave to light ‘em off. The Ewald Brothers, Bill Pitts, Ron Johnson and many others brought out their diggers. Drag racing royalty came out too for autographs and tire kickin. Don Prudhomme, Tommy Ivo, Carl Olson, Mike Kuhl, Art Chrisman and countless other nitro legends became regular attendees, some of whom jumped behind the butterfly to idle down memory lane. This year’s event was on par with some of the best we’ve seen here. With Bob Beck as emcee, we saw Ash Marshall’s dragster, Tommy “The Watchdog” Allen’s car, Schultz & Glenn, Mike Kuhl, Bill Pitts “Magicar” (on no less than 100% pop), The Scorpion, The ChiZler, the Burkholder Brothers Fiat Topolino, and Eily Stafford’s “Killer Crower” entry. There were others as well, lighting up the night. With the cars, the crowds and the intense energy in the air, it’s safe to say the Cruisin’ Grand curtain call capped another awesome summer. We couldn’t help but notice how many families came out for the fun. Events like this inspire the next generations and to continue to motivate the legends that made Southern California hot rodding and drag racing so great. Next year’s Cruisin’ Grand events kick off late March culminating with Nitro Night in September 2018. Stay up to date with all the news at www.cruisingrand.com

This article, written by Jena Crawford, was originally published on Fuel Curve.