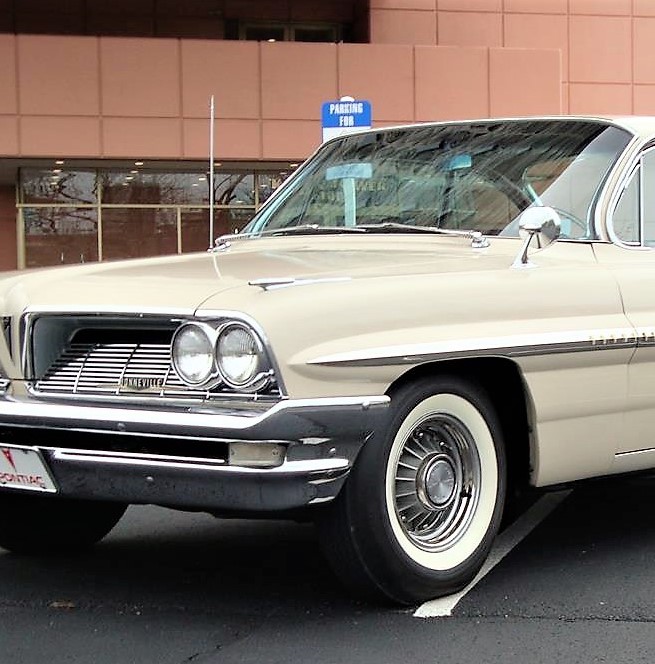 Named for the famous speed-record Salt Flats in Utah, Bonneville was Pontiac’s luxury/performance car done on a grand scale. Bonneville hit its stride in 1959 as the brand launched its big wide-track models, and it led the division for the next decade.

The Bonneville sports a ‘bubbletop’ roofline

The Pick of the Day is a 1961 Pontiac Bonneville hardtop, with a roofline so trim and its front and rear glass so broad that it’s called a “bubbletop,” a great look also offered at the time by the other GM divisions. More than 18 feet long and fully loaded with features, the 3,900-pound Bonneville is a monumental automobile that helped launched the muscle-car era of the 1960s.

This Bonneville is a 60,000-mile survivor that looks to be in superb original condition, and which the Louisville, Kentucky, dealer advertising the Pontiac on ClassicCars.com says, “Runs and drives like new and always draws a crowd at shows and cruises.”

“Being all-original, the car is not perfect, but shows only very, very light wear,” the seller says in the ad. “They are only original once!”

From the photos accompanying the ad, the Bonneville appears to be a well-loved automobile that shows 56 years of meticulous care and maintenance. While the dealer’s information in the ad is skimpy, the under-hood shots show what appears to be the standard 389 cid V8 engine that produces around 300 horsepower, although it’s hard to tell for sure; the 389 was offered in various configuration to produce from 235 to 348 horsepower.

The maroon vinyl interior looks exceptionally nice, with even the sporty original steering wheel gleaming and unmarked. Overall, the car appears to be very clean, with nice original cream-colored paint and a tidy engine compartment.

A desirable Pontiac Bonneville coupe in such remarkable original condition is a rare find, and priced accordingly at $38,000. This car looks beautiful and is fully documented, including the built sheet.