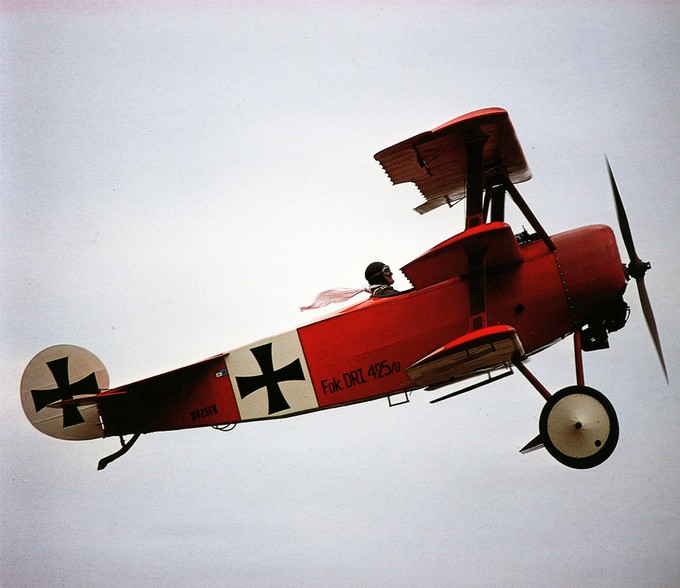 To commemorate the centennial of World War I, the Owls Head Transportation Museum has begun crowdfunding efforts to restore its version of the “Red Barron,” a 1917 Fokker Dr.I reproduction inspired by the airplane flown by Manfred von Richthofen.

Richthofen was the son of a Rittmeister — cavalry or riding master — in the German army. He entered military school in 1903 and by age 11 proved to be a natural rider and marksman. He was commissioned as a cavalry officer in 1911 and was deployed in 1914 within days of the start of warfare.

Many countries did not see a practical use for aircraft technology in the years leading up to the war. However, with very few aircraft in the sky, observers found relative safety in the air and airplanes proved to be very effective for the battlefield and troop-movement observation.

Richthofen’s first aerial observation mission was flown in the spring of 1915. While he lost his papers, helmet, and all sense of direction during that first mission, he continued to progress as a pilot, in 1917 was the leader of a fighter group known as the “Flying Circus” and, since the plane he flew was painted red, he became a national hero nicknamed the Red Baron.

Though circumstances of the event remain unclear, von Richthofen was shot from the skies over Vaux sur Somme, France, on April 21, 1918. He  was 25 years old when he died.

The museum’s 1917 Fokker Dr.I reproduction was built in the 1970s by founding trustee Kenneth Cianchette and not only is used to tell the story of the German flying ace, but to show a piece of transportation technology that fueled the early 20th Century and how those technologies are still significant today.

“This tri-plane is an integral part of our World War I collection, and we hate to see it grounded for the 100-year anniversary of the Great War,” said Kevin Bedford, the museum’s acting director. “With no original examples of this aircraft in existence, it is especially important that we get the Dr.I back into the air so that we can use it as a teaching tool to provide a living history experience for our visitors.”

The Owls Head museum is located at the end of an airport runway in Maine.

The museum’s Red Baron has been grounded since 2014 when it was discovered to need considerable repairs to the exterior fabric, body structure, and engine. With a long history of restoring, repairing and even constructing aircraft in its collection, the museum estimates $50,000 is needed to restore the aircraft and thus launched a Kickstarter campaign to crowdfund the project.

The campaign has been marked “all or nothing,” meaning the project will only be funded if the $50,000 goal is met by March 23.

The museum hopes for donations ranging from $10 to $10,000 and offers incentives to donors, including pieces of the plane that will need to be replaced. The museum notes that all donations are tax deductible.

To donate or learn more, the Kickstarter campaign can be viewed here.