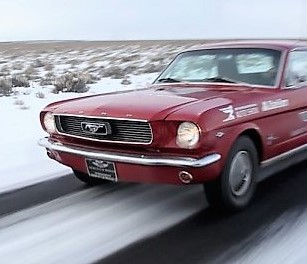 “The Drive Home II: The Heritage Run” fleet consists of a 1961 Chrysler 300G, a 1957 Chevrolet Nomad and a 1966 Ford Mustang coupe. The bright-red classics were chosen for their representation of Detroit’s Big Three manufacturers, and the moving tribute to America’s automotive heritage is meant to remind us of the personality, ingenuity and dependability of Detroit Iron. Wannabe automakers Google and Apple should take note.

Going along for the ride in an enclosed trailer is the ex-J.D. Rockefeller 1917 Crane-Simplex Model 5 by Brewster. Cream of the crop in its day, the New York-built car is celebrating its 100th anniversary and will be displayed at enthusiast gatherings along the route.

Plans call for a number of public gatherings, with the call going out for enthusiasts to bring their own classics out for a drive. Here’s the basic rundown of dates and locations:

The obvious concern for most old-car enthusiasts is the road dirt and salt to which these classics will be exposed. Rest assured, the museum says, there be a special wash and detailing to return the cars to their pre-Drive Home appearance. After last year’s run, the Chrysler 300G remained in the Detroit area for a number of shows and events, including Eyes on Design and the Woodward Dream Cruise, its Mardi Gras Red paint shining deeply as ever, none the worse for wear.

The physical concern noted, the Drive Home is a deeper exercise in how we effectively remember the cars that defined the freedom, mobility, and ambition of America.

“Of real importance to me is the desire to distinguish America’s Car Museum from traditional notions of a museum with cars idling lifelessly as relics of an age gone by,” said museum CEO David Madeira. “I argue that while driving vintage cars may put them at ‘risk’, not driving them makes their ‘death’ certain. Cars that don’t move are sad objects to look at. And driving them is the only way to give them a chance for a meaningful existence giving pleasure to driver and passengers.”

For more information about the Drive Home, including times and locations of public stops, visit the museum website.