You could drive by Toyota’s automotive treasure chest a million times and never know it was there. Snug in an industrial estate in Torrance, California, surrounded by innocuous boxy buildings with huge “Self-storage” signs on the front, the Toyota USA Automobile Museum could double as a secret headquarters for a James Bond villain.

That’s until you step inside.

A bright red 2000 GT coupe, now a million-dollar classic, greets you in the lobby. Beyond it, a 45,000 square-foot warehouse holds dozens of immaculate examples of Toyota cars, trucks, concepts, movie props and racing machines.

While the museum is technically not open to the general public, booking a private tour is as simple as sending an email or picking up the phone and scheduling a visit. We had the entire place almost entirely to ourselves during two hours of roaming amongst spotless Celicas, cream puff Camrys, and rugged Land Cruisers, all in as-new condition.

Here are some of our favorites from Toyota’s, perhaps, not-so-secret (anymore) collection of past classics.

1967 2000GT
Seeing one of Toyota’s stunning 2000GT coupes qualifies as a life-changing event for most car nuts. The Toyota USA Museum has three of them!

Introduced at the 1965 Tokyo Motor Show, production began two years later and, in total, only 337 were built. Of those, 54 made their way to the U.S. market.

Powered by a 150-horsepower, 2.0-liter inline-6 coupled to 5-speed manual transmission, this shapely Toyota – considered the world’s first Japanese sports car – would have set you back about $7,200 when it was new. Now, examples routinely sell for more than a million dollars, making them the most expensive Japanese classic cars in the world.

Finished in gold, white, or a vibrant shade of red, all the examples in the Toyota museum are in perfect condition. We were particularly smitten by the one finished in Gold Metallic paint – a color choice your author had never seen on a 2000 GT before. Then again, the red example in the lobby is one of only four imported into the U.S. circa 1969. It’s also fitted with an optional – and extremely rare – air conditioning system. For California cruising, that’s not a bad thing to have onboard.

An off-roading legend, the FJ40 Land Cruiser is ruggedly handsome and renowned for being a workhorse.

We’d love to get our hands on the pristine white example sitting proudly in the Toyota Museum but, with only 3,000 original miles, it seems a crime to get it dirty.

The Land Cruiser, especially the FJ40 models, cemented Toyota’s reputation for reliability here in the U.S. and abroad. While you’d never accuse it of being pretty, the FJ40 has a timeless shape that makes you want to point toward the nearest forest or sand dune and drive into the sunset. Powered by a 125-horsepower inline-6 that comes mated to a 4-speed manual – and a myriad of off-roading gear ratios – the “Landie” rides on a petite 90-inch wheelbase, yet tips the scales at a stout 3,800 pounds.

For car trivia fans, the Land Cruiser also happens to be the only model in the Toyota lineup that has been sold continuously since the Japanese automaker began selling cars in the U.S.

1966 Toyota Stout 1900
Toyota’s stab at cracking the U.S. truck market came in the shape of the Stout pickup. Stretching 170 inches in length and weighing approximately 2,800 pounds, the Stout came powered by a 1.9-liter 4-cylinder that delivered a grand total of 85 horsepower. An information sheet placed alongside one of several examples in the museum optimistically refers to the OHV inline-4 as a “high performance” motor.

With its 6×5 foot cargo bed and 2,000 lb. towing capacity, the Stout was marketed as a work truck that was as simple to operate as a standard car. A column-mounted 4-speed manual keeps the cabin clean and uncluttered, while a springy foam-filled bench allows for three-across seating.

According to Toyota, the Stout could cruise comfortably at 80 miles per hour. The speedometer does stretch that far, though we might be more inclined to let that “high performance” engine enjoy life as lesser revs.

1977 Toyota Celica GT
When it arrived in the U.S. in 1971, the Toyota Celica helped usher in an era of affordable Japanese sport coupes that were lighter, more economical, and certainly much cheaper to insure then heavy-hitting American muscle cars. Granted, it never had a Hemi under the hood – and the 1977 grey example seen here is fitted with an automatic gearbox, no less. But the Celica was a smash success for Toyota.

In its first year stateside, more than 17,000 were sold. When this 1977 example rolled off the production line, the Celica was truly a global hit with more than one million having been sold around the world.

We must admit, this brutish liftback sure has the look of a muscle machine, even if the 96-horsepower 2.2-liter (and that slush box) doesn’t have the speed of a Road Runner, or the bite of a Barracuda.

As an interesting – and slightly morbid – aside, this pristine Celica GT had what we thought was a film crew practicing scenes in the car. When we asked Toyota’s museum staff if the car had some celebrity connection, we were told the Celica was being used to help solve a cold case murder file, in which a young woman was killed in a car almost identical to this one. Yipes! 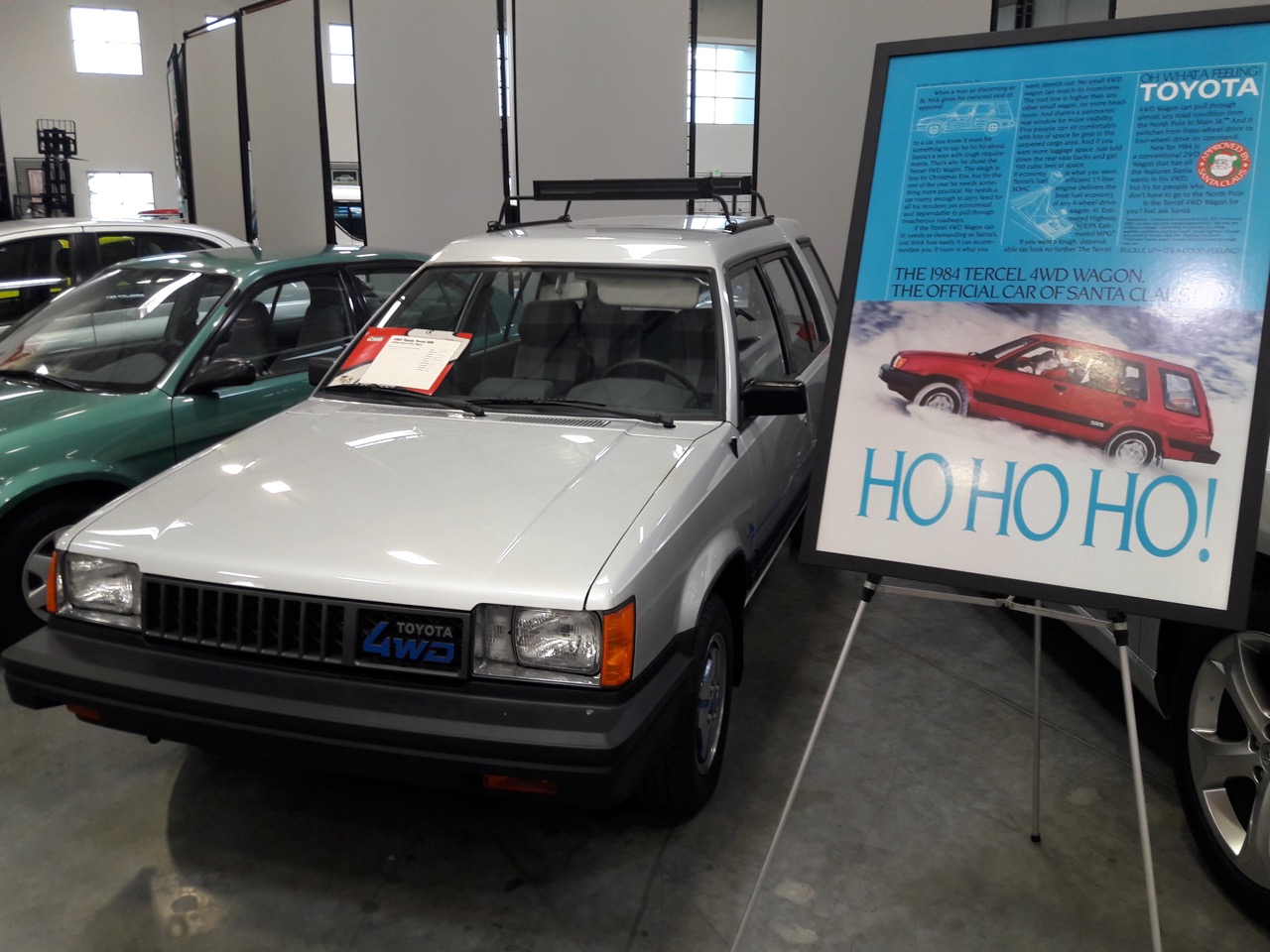 1983 Toyota Tercel SR5
Part of the appeal of the Toyota museum is spotting the survivor cars, the normal everyday cars you remember as a kid, but haven’t seen since. When is the last time you saw a 1984 Camry in perfect condition? Or how about a 1983 all-wheel-drive Tercel wagon, for crying out loud.

Far from the most valuable or eye-catching model in the collection, this little white economy car has somehow stood the test of time. For pure 1980s nostalgia, it’s hard to beat. The alloy wheels have blue highlights, and the decal of a skier zooms along each side of the car.

Powered by a 62-horsepower 1.5-liter 4-cylinder that’s coupled to a 6-speed manual, the Tercel weighs a scant 2,280 pounds despite having its AWD hardware.

We might opt to grab the keys to a 2000GT first, but this square-edged Tercel wagon would make a fine first alternate if snowflakes start falling in Southern California.