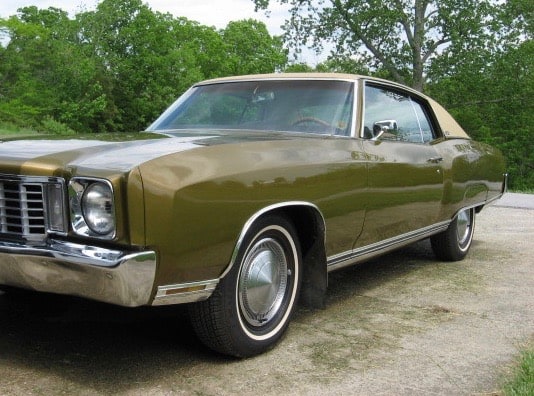 On February 14th, 1972, I was turning 9 years old and living in Boulder City, Nevada. We had moved there from my hometown of Phoenix after my father’s sudden death at 34 when I was just 3.

In February, 1972, my mom was in search of a new car. At the time she was driving a 1963 Cadillac Coupe DeVille that was on its last legs. We drove the Cadillac from Boulder City into Las Vegas, about 18 miles, stopping along the way to add oil to the motor as it was leaking something terrible. She decided to try Fairway Chevrolet on East Sahara Ave.

As we pulled into the lot, we heard a loud bang come from under the Cadillac. She said, “Honey, we meed to find something herre, beause this car is not going to make it back to Boulder City.”

As we walked up to the front doors, she said, “Now honey, if you see something you really like, and I like it too, we’ll get it.”

We opened the door, and there she was! Sitting the middle of the showroom floor was what to become our 1972 Chevrolet Monte Carlo.

As we walked in, I gasped and said, “Oooh Mom, I like that one!”

In 1977 my mom passed away at 44 from ovarian cancer. I was 14. While she was sick and trying to put all of her affairs in order she came to what to do with the car. Initially, she was going to have it sold, and have the money put into an account for me when I turned 18. Though I was only 14, I begged and pleaded with her not to sell her. I told her if she would consider leaving her to me, that I would promise never to sell here but to keep her the rest of my life as I was sure that someday she would be a classic.

So, with no driver’s license, at 14 years old,and unable to drive for almost two years, mom agreed and left me her beautiful Monte Carlo.

I still have her to this day. She ooks just as she did on that cold February morning all those decades ago when I first saw and fell in love with her. She will be with me to the end.

We have had our ups and downs over the last 39 years, but she’s always been there for me, and I’ll always be there for her.

When I see her it melts my heart, and all I see is mom.