Barn find of barn finds? Expert weighs in on 60-car discovery in France 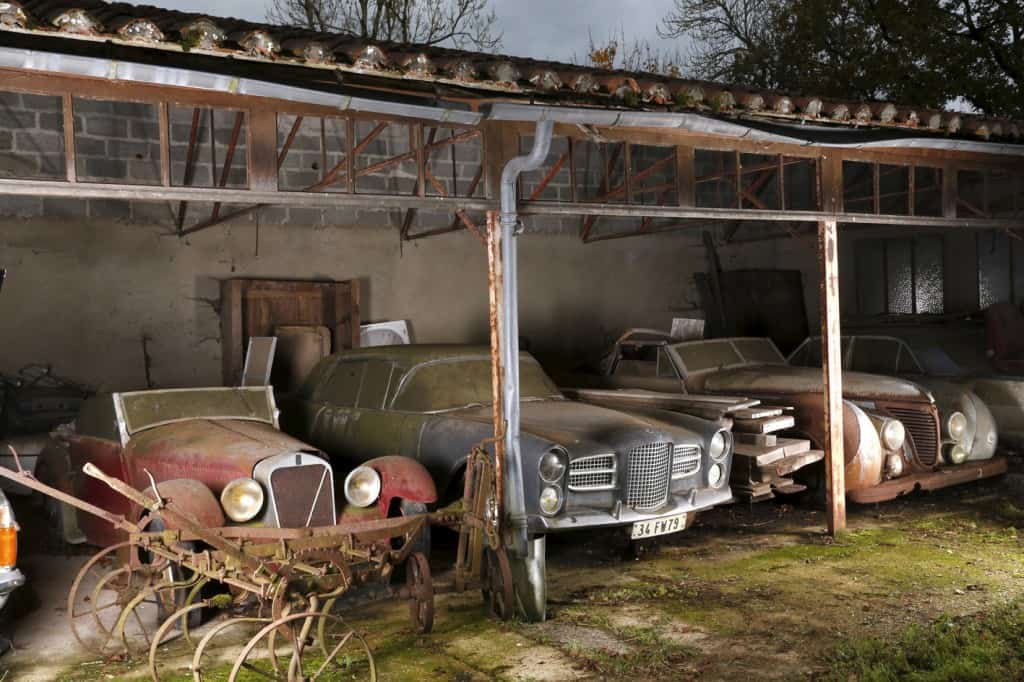 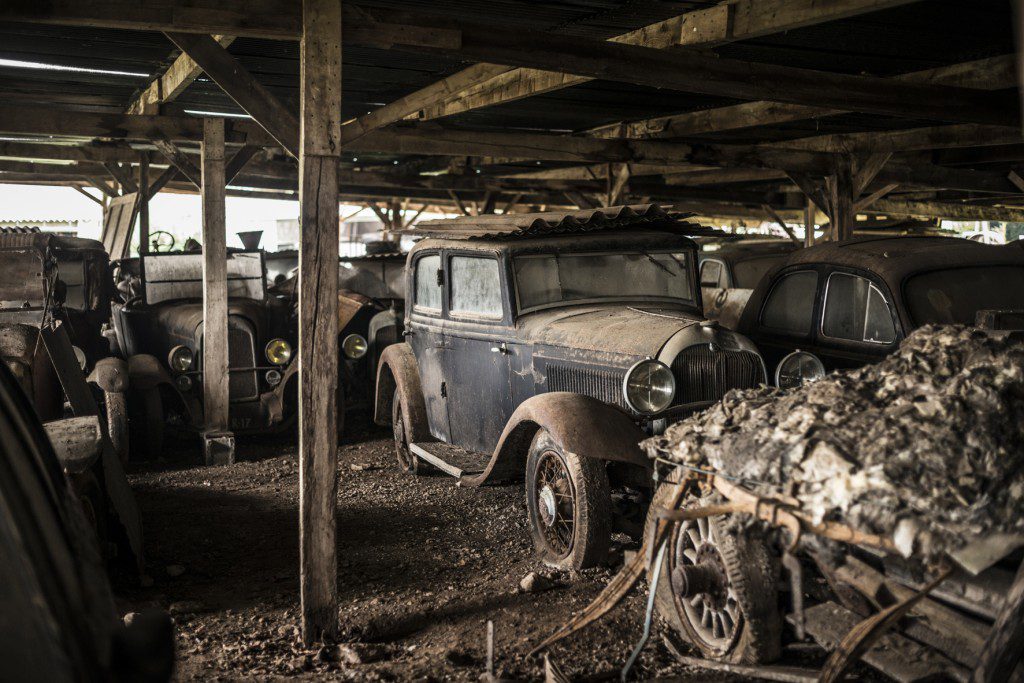 There’s an occasional Ferrari or Maserati that pops up, but this is like a Paris auto show that was simply forgotten.”

Those words from Tom Cotter, who wrote not just the book on barn-found cars but several books on the subject, starting with The Cobra in the Barn and his latest, 50 Shades of Rust: Barn Finds You Wish You’d Discovered.

Cotter was responding to news that a 60-year-old collection of amazing classic cars — including a Ferrari 250 GT short-wheelbase California Spider, Bugatti 57 Ventoux, Maserati A6G 2000 Gran Sport Frua, Hispano-Suiza H6B Millon-Guiet cabriolet and three Saoutchik-bodied Talbot Lago T26s — had been discovered in open sheds in western France, and they will be offered for sale in February at the annual Artcurial Motorcars auction that takes place as part of the Retromobile showcase in Paris.

The cache of some 60 vehicles, known as the Baillon collection, was discovered by Matthieu Lamoure, Artcurial’s managing director, and Artcurial car specialist Pierre Novikoff.

Lamoure said their experience was the automotive equivalent of Lord Carrington and Howard Carter when they first entered the tomb of the boy king Tutankhamen in Egypt in 1922.

“You go into this profession for discoveries like this,” Lamoure was quoted in an Artcurial news release announcing the discovery and upcoming sale.

“I don’t think the collectors’ car world has seen anything like this since the Schlumpf Collection,” said Novikoff, referring to the Schlumpf brother’s stash of Bugattis that they secreted away in an old textile factory.

“What is so special here is the number of cars, the range and the quality and pedigree of the models,” Novikoff added. “Unlike the Schlumpf collection that was known about and documented, our’s is completely new. It’s a discovery.”

“To have this many significant cars in one group!” Cotter said. “There’s an occasional Ferrari or Maserati that pops up, but this is like a Paris auto show that was simply forgotten.

“(As a barn-find hunter) this is what you dream about,” he added. “This is my kind of fantasy.”

Yet it is not a fantasy. The cars were collected in the 1950s and ’60s by Roger Baillon, a truck manufacturer and transport-company owner who in 1947 had built and exhibited his own sports car, the Oiseau bleu (Blue Bird).

Baillon’s plan was to create a car museum with the cars he collected.

You go into this profession for discoveries like this.”

“He wanted to celebrate the art of automotive engineering and bought a property to turn into an automobile museum,” Lamoure said. “Having a transport business, it was straightforward for him to have his treasure delivered to the property he had bought in 1953 for this purpose. He even acquired a little train which he planned to use to make a tour of the museum, that would pass by all the cars.”

Novikoff added, “When the vehicles arrived, he put them away without much fuss, one next to the other.”

Within the walled garden of his property, Baillon built a series of open-sided, corrugated metal-roofed sheds for the cars. But his plans for a museum ended when his businesses went into decline in the 1970s. Baillon sold off many of the cars he had collected. Most people figured that what he sold was all he had. 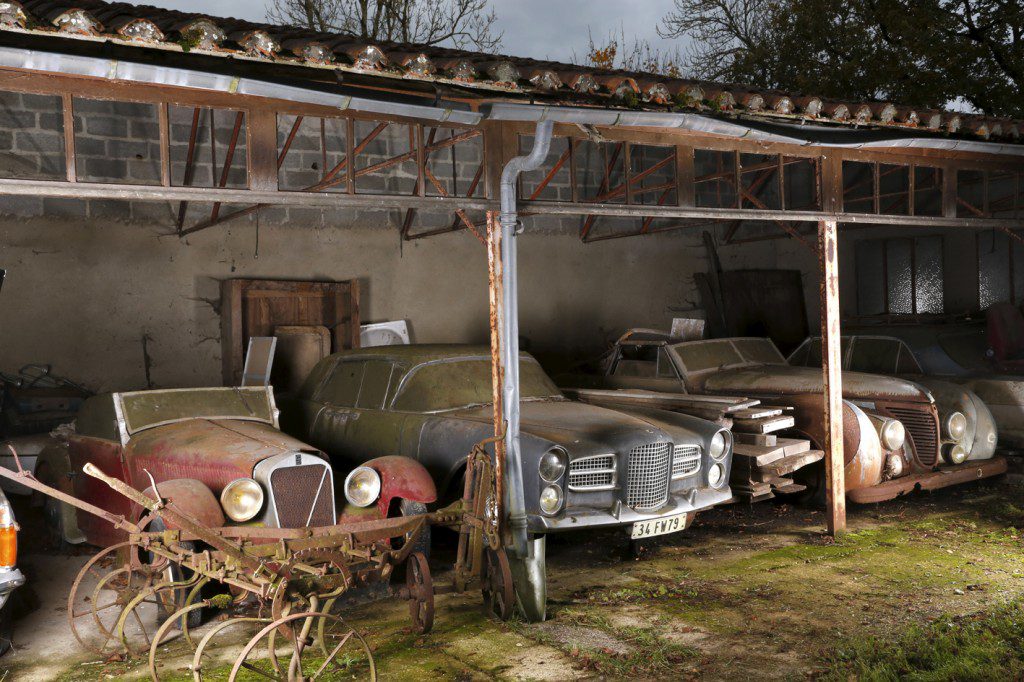 But he kept 60 of his most extraordinary cars on his property. Their presence was known only by some of Baillon’s heirs until Lamoure followed up on a rumor he had heard.

“I’m not sure I’ve ever seen so many exceptional cars together in one collection — Bugatti, Hispano-Suiza, Talbot-Lago, Panhard-Levassor, Maserati, Ferrari, Delahaye, Delage…,” Novikoff said. “Roger Baillon saved these cars and succeeded in his task: to trace the history of the automobile through the finest examples.”

Lamoure said the Ferrari California Spider is one of only 37 produced. “Every example has been carefully documented by historians and this one was thought to be lost. We have found it!

“And we really did ‘find’ it: It was buried, in a garage, under a pile of papers (old copies of la Vie de l’Auto) and various covers. Not what you would expect for a car worth $12 million to $15 million.

“Its neighbor was another gem,” he added, “a Maserati A6G Gran Sport Frua,” one of only three such vehicles built.

“All the cars are significant for their heritage, and we hope that some of them will join big collections in and outside France. Perhaps even museums,” Novikoff said.

“They will be displayed (at the auction) and sold as they are. Just as we found them. Possibly one or two spider’s webs may be lost in transit, and some of the dust blown away, but that’s all.”

(In addition to providing information and photographs for this article, Artcurial has posted a video about the barn-found collection.)