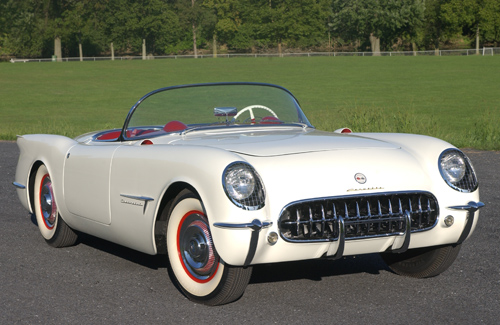 The beautifully classic, original, all American sports car is surely the 1953 Corvette! Way back in 1927 a young man by the name of Harley Earl was hired by GM and at the time, who would have guessed that he would be responsible for the design of one of the great American Icons of the automobile industry? Harley (cool name) had a passion for and always loved sports cars from early on, but that passion became more intense when our proud and victorious GI’s returned home from WWII bringing with them a flotilla of Alfa Romeo’s, MG’s, Jaguars and other similar marques from Europe. These “sports cars” were vastly different from anything being produced here in America at the time. They were small, fun to drive, felt “sporty” and were even economical to operate. I mean really, who wouldn’t want one of these little gems? And so, the flame was fueled and Harley pushed the top brass at GM to let him build the sports car of his dreams. Enter: “Project Opel”, not sure where they came up with that name, but history was made that very day!

See all 1953 Chevrolette Corvettes for sale

It was already late in 1951, by the time Harley Earl assembled his “special projects” crew of designers and laid-out his plans to build what would become America’s Sports Car. He rushed to complete a hand-built prototype, nicknamed EX-122, the first pre-production “Corvette”, to be ready for display at the GM Motorama Exhibition, in January of 1953 at New York City. The name “Corvette” was chosen in honor of the U.S and British naval fleet’s convoy of escort ships called Corvettes. These ships were famous for their speed and maneuverability.

The prototype was shown to the crowd at the Motorama and received rave reviews and was rushed put into production immediately. In fact, within 6 months after their debut to the world, they were pumping out hand-built units in a makeshift warehouse that used to be an old truck assembly plant in Flint, MI. They were also revolutionary, due to the fact that they were made of a new lightweight product called “Fiberglass”. Story goes that sheetmetal was scarce after the war, so they sought a suitable replacement for this special project vehicle. By the end of the first “production” run, 300 of these beauties had been produced and they all sold quickly. Even though the car was a huge hit, it may have been just a flash-in-the-pan of automotive history, if it weren’t for a guy named Zora and the Ford Motor Company!

See the 1953 Chevrolet Corvettes for sale on ClassicCars.com