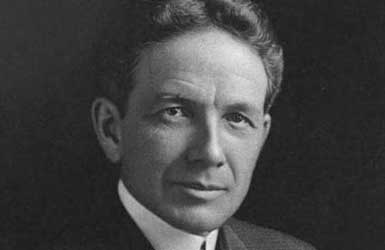 William C. Durant was born on December 8th, 1861 in Boston Mass. He quit high school to begin work in his grandfather’s Flint, Michigan, lumberyard. By 1885 he had partnered with Josiah Dallas Dort to organize the Coldwater Road Cart Company, which would become a leading manufacturer of horse-drawn carriages. By 1890, Durant-Dort Carriage Company was the nation’s largest carriage company, producing approximately 50,000 horse-drawn vehicles a year.

In 1904, Billy Durant was approached by James Whiting of the Buick Company to promote his automobiles. Whiting persuaded Durant to join Buick as General Manager. In his first act as Buick’s GM, Durant moved the Buick assembly operations briefly to Jackson, and then began construction on a large Buick complex in Flint. In three short years Buick led the U.S. automobile production by manufacturing 8,820 vehicles. Between 1904 and 1908, Durant was made Buick’s president and established several essential parts and accessory companies such as Weston-Mott and Champion Ignition Company

By 1908 the top four auto producers in the U.S. were Buick, Reo (headed by Ransom E. Olds), Maxwell -Briscoe, (headed by Benjamin and Frank Briscoe) and Ford (headed by Henry Ford). Benjamin Briscoe wanted all four producers to merge and form one large company. Negotiations began in New York with J. P. Morgan’s son-in-law, Herbert Satterlee, and ended when Ford demanded cash instead of stock. and along with Reo pulled out of the deal.

Still determined to start this new auto company, Durant, at Satterlee’s suggestion, dropped the proposed name “International Motor Car Company” and settled on “General Motors” as the new name for his company.

On September 16, 1908, Durant incorporated General Motors of New Jersey (GM) with a capital investment of $2,000. Within 12 days the company issued stocks that generated over $12,000,000 in cash. General Motors then purchased Buick with stock. Six weeks later, GM acquired the Olds Corporation of Lansing, Michigan.

Next, Durant completed a deal with financially troubled Oakland Company. Oakland was located in Pontiac, Michigan, and would later be renamed — you guessed it — Pontiac. Finally, Durant sought to acquire Cadillac Motor Car Company from the Leland father/son team. The Leland’s did not want stock and like Henry Ford, would only settle for cash to the tune of $4.5 million.

GM could not raise this amount of money, but Buick, the cash cow, could. So, Cadillac was bought with Buick funds, thereby becoming a subsidiary of Buick.

Eventually, though, GM purchased Cadillac from Buick. During this same period, Durant also acquired many truck and parts supply companies, including AC-Delco, which he helped form with Albert Champion and still bears his initials today.

In an 18 month burst of aggressive wheeling and dealing, Durant purchased, acquired or incurred a substantial interest in almost 30 auto makers. However, all this wheeling and dealing came at a price. Durant became financially overextended and consequently, lost control of GM to banking interests in 1910.

Undeterred, Durant partnered up with Louis Chevrolet to form Chevrolet Motor Company in 1911 and used the profits from Chevrolet to regain control of GM in 1915. However, Durant’s management style once again proved troublesome and he resigned in 1920 under an agreement with, then GM president Pierre Du Pont in exchange for Du Pont’s paying off Durant’s debts.

Determined to regain his place in the automotive marketplace, Durant formed Durant Motors in 1921 and produced a line of cars bearing his name for the next 10 years. However, a declining market and the Great Depression ended Durant’s automotive career in 1933.

Durant continued to create innovative ideas, but he no longer had the money to execute his plans. Near the end of his life, he operated several bowling alleys in Flint near the Buick complex. Durant was not bitter, nor did he regret his actions. Instead, he put his energy into new ventures. He believed bowling alleys were the next big thing – every family in America would spend their leisure time at bowling alleys. This venture too, proved to be unsuccessful and marked the end of long string of personal tragedies and failures that plagued Durant since the fall of the Durant Motors in 1933.

From 1934 until his death, Durant dabbled in stocks, politics, and social issues. None of these later ventures reflected his former industrious thinking and he faded from public life. On March 18, 1947, William Durant died in New York City, the same year as Henry Ford, thus, marking the end of a remarkable era in automotive excellence.