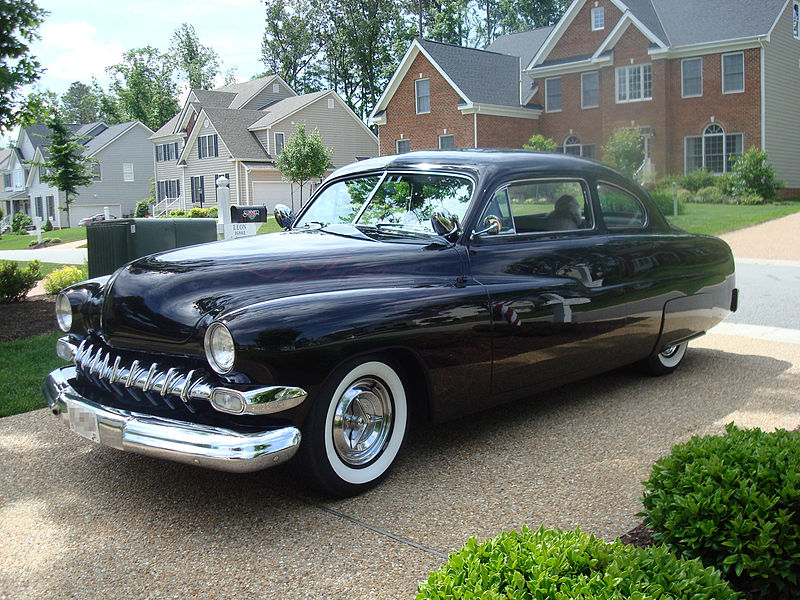 One of the most significant and easily recognized vehicles to emerge from the post WWII era of prosperity had to be the awesome looking 1949 Mercury, also known as the original “Lead Sled”! The coupe was the most sought after of the offerings, but the 4 door sedan, complete with “suicide rear doors” and even the convertible models weren’t too rough on the eyes either.

This car (built 49 to 51) was the dream of Ford’s, then design guru and styling chief, Bob Gregorie and his team. He fought hard against the “powers that be” at Ford management and its bean counters to gain approval to ready his cutting edge, factory customized behemoth and beloved brainchild for production.

When they constantly refused to have any part of it, mainly due to costs of bringing it to realization as a profitable production vehicle for the masses, he turned to the Mercury Division of FoMoCo and pitched his concept to them. Once gaining the approval of Mercury’s management and getting the green light for the project sometime in 1947, he pushed to have it ready for the 1949 year model production run. The beloved “Merc” was born!

His “dreamy design” was complete with styling cues he gleaned from some of the early west coast customizers of the time and included such things as a much lower, wider stance, longer sleeker lines, low roof lines, “fade-away” styled fenders and blended quarters, huge chrome grille and mammoth bumpers and actually, a car that looked fast just sitting still! He is many times credited with creating the first “factory customized” production vehicle and I for one am not going to dispute that credit.

Who can forget the Bob Hirohata ‘51’ Merc and the rage it created? A genuine original, which I believe, was the first fully customized (post-factory that is) “Merc” out there. This awesome looking monster of a vehicle was completed in 1952 by the artisans and craftsmen at the now infamous Barris Kustoms Garage in southern California! It still carries on thru time as one of the greatest, all-time, bad-ass lead sleds out there! This is definitely one car that I would love to own someday!

Click here to view all 1951 Mercury “Lead Sled’s” for sale on ClassicCars.com