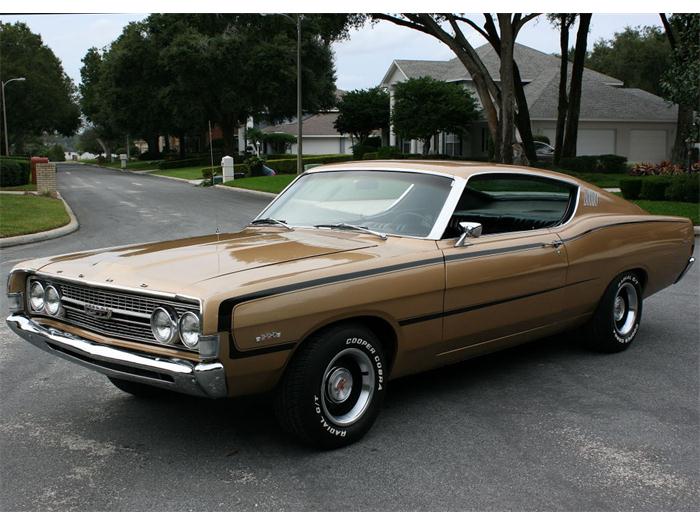 In 1968, Ford Motor Company forged ahead with their intermediate sized (116-inch wheelbase) muscle car selections.  They added the Torino name to the upper end offerings of their redesigned Fairlane model lineup. The Fairlane badging was discontinued after 1970, when all models would be badged as Torino (with various option/package levels through 1976).

The new larger and heavier Ford Fairlane/Torino was available in a 2-door coupe, fastback (or SportsRoof as they called it) and convertible (very rare, due to minimal production numbers). It was also available as a 4-door sedan and a 4-door station wagon, which was the only model in the lineup which actually had a shorter (113-inch) wheelbase.

The 1968/69 Fairlane/Torino again had 4-headlamps. Two each, placed side-by-side, at each end of the recessed grille opening, as opposed to earlier models where they were stacked vertically on top of each other at either end of the grille area. Parking/turn signal lamps were located in the front fenders at each corner just above the chromed bumper and wrapped around to incorporate the side marker lamp as well (to keep in step with Federal mandates for side-marker lamps).  Similar to previous models, the taillights were a squared style with the backup lamp located across the center of each lamp (either vertically or horizontally, depending on specific model). Keeping with the advantages of vehicular rigidity, safety and lower production costs, the unitized construction style of build was used.

Engines ranged in displacement from 200-cid L6-cyl in base model Fairlanes and 302-cid V8 with 2-barrel carburetor in all base model Torino GTs, to late addition (April 1968) of a 428-cid V8 Cobra Jet big-block motor (with supposed underrated hp of 335) in the rarely seen Cobra Jet optioned models. Also available, in various models, were the 289-cid V8 with 2-barrel carburetor, 390-cid, V8 big-block with either 2 or 4-barrel carburetor and the even more rare (like ghostly rare) 427-cid V8 big-block. The 427-cid V8 big-block was an initial offering but no records of a car actually being produced with this engine seem to exist.

All Fairlanes/Torinos came standard with the 3-speed manual transmission, with an available 4-speed manual (which also had staggered rear shocks to help eliminate inherent wheel-hop, while performing burnouts) and C-6 “Cruise-O-Matic”, automatic transmissions as options. There was an exclusive, Torino GT only, handling-suspension option available which gave you heavy-duty springs, shocks and larger front sway bar. However, any V8-equipped model, could be ordered with a heavy-duty suspension which also gave you heavier springs and shocks. All cars came with drum brakes, but could be upgraded to front discs and even power assist. Suspension was carried over from previous models and had rear, solid-axle, dual semi-elliptical leaf springs, with independent front coil springs and upper/lower control arms.

On the interior front, we saw a new cockpit area with four cylindrical gauge openings placed in front of the driver.  The cockpit area included the fuel gauge and engine temperature warning lamp in the far left pod. The second pod had a 120 mph speedometer (situated directly above the steering column). The third pod had an “idiot” light for charging system and low oil pressure warning (also available was an optional tachometer) and the fourth pod was empty but would house the optional clock when ordered.

The more breathable “Comfortweave” upholstery was available in place of the standard vinyl upholstery. The Torinos came with color-coordinated carpets, additional interior trim and exterior enhancements (including fancy crests on the rear, side-roof areas). The Torino GTs came standard with bucket seats, center console, courtesy lamps on inside door panels, special badging and exterior trim and hub caps. The Torino GTs are quite rare in today’s market, as only 98,000 coupes and fastbacks were produced and only 5,300 convertibles for 1968.  This is due to several factors, including low production numbers, deterioration problems of sheet metal and chassis components and abnormally low resale values. The factors caused many units to end up in junkyards.

Few changes to the 1969 Fairlane/Torino were evident, but quite a few performance upgrades were made. Subtle changes were made to the grille area and the taillights were more squared looking. Two new Cobra specific models, a 2-door hardtop and a 2-door SportsRoof, were added to the lineup in 1969.  The Torino Talladega was added to specifically reach the NASCAR market and participate in races. It afforded Ford a total of 26 victories during the 1969 Grand National season and a total of 750 (including prototypes) of these were produced.

Ford’s Torino (which is Italian for Turin, a city in Italy) name was chosen because Turin has been compared to Detroit, MI, in respect to being an automobile manufacturing Mecca.

Find a classic Ford Torino that you love!