A model year to love 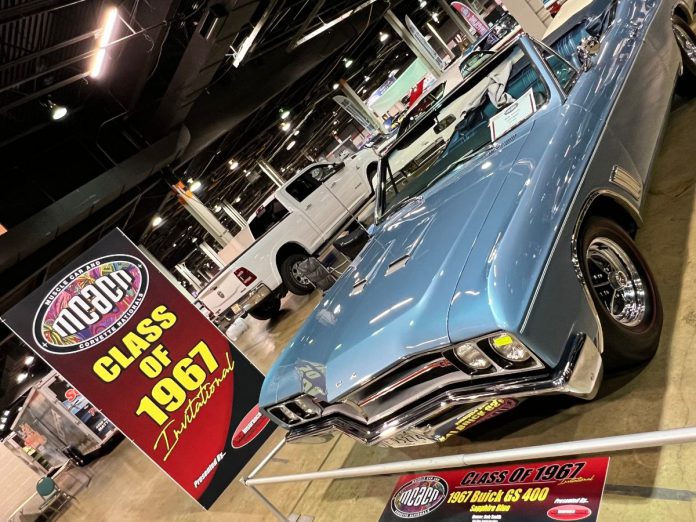 The Class of 1967 was given its due at the 2022 Muscle Car and Corvette Nationals. Celebrating 55 years, 1967 was a pivotal year for performance cars, the cusp of what had been and what was going to be.

For one thing, Chrysler got its act together and finally produced dedicated performance models with the Plymouth GTX and Dodge Coronet R/T after relying on the Hemi and tepid 383 in Belvederes. Of course, image meant everything, and Chrysler solved its problem in 1967. Other mid-size vehicles were carry-overs, though most were improvements over the 1966s.

Several pony cars were introduced in 1967, with the Camaro and Firebird turning up the heat on the Mustang, which was redesigned to be longer/lower/wider. A new upscale companion at Mercury added to Ford’s fortunes in the pony car segment. The Barracuda also was redesigned but its Valiant origins were still apparent, for better or worse.

A year later, Chrysler, GM and Ford all had redesigned their mid-size vehicles, with the Plymouth Road Runner changing the rules in the high-performance market. Like Rock ‘n Roll in the mid-1950s, 1968 was the year the youth market became a Detroit priority. Here’s a look at some of the cars that made 1967 a pivotal year.

Buick’s Gran Sport was revamped in several ways. Though facelifted from 1966, the Gran Sport was now called GS 400 in response to the new 400 that replaced the 401 “Nailhead.” Also new was what would later be known as a “Junior Supercar,” the GS 340; there also was a curious regional special called the California GS that would become available nationally for 1968-69.

This Blue Mist 1967 GS 400 hardtop was produced with the standard three-speed manual on the floor. Only 373 hardtops were built with this transmission, which actually was a Ford unit.

The hood scoops on this Regal Black GS 400 were painted like the rest of the body, but the GS 340’s were painted red, along with a wide longitudinal stripe running from the non-functional fender extractors to the rear.

You can see this Ivory GS 400 convertible features a Saddle interior, a color not really seen on other GM muscle cars but, considering Buick’s clientele, it makes sense that Buick would offer more mature colors. These colors became more popular across the industry around 1970.

This color is called Verde Green, which was not available on other GM cars save the Oldsmobile Toronado. All GS 400s featured a nifty red “Star Wars” air cleaner.

The Buick Riviera also received an updated engine for 1967, this one measuring 430ci. Due to GM’s ban on multiple carburetion aside of the Corvette, the Riviera no longer had a 2×4 option. This example is one of 4,837 built with the GS package.

The 1967 Camaro had a secret: a road-racing package with the option code Z28. Few people knew about it, which is why only 602 were built. By 1969, the word got out and over 20,000 were built. This ’67 features the Rally Sport package and is equipped in Day 2 configuration.

The regular performance Camaro was the Super Sport, initially only available with an exclusive 295-horsepower 350 but, after a few months, two 396s became available. This Granada Gold Camaro SS/RS 350 features column-shift automatic and standard hubcaps without trim rings.

Compare the above with this Capri Cream 1967 Camaro and you could be forgiven in thinking it’s a Super Sport. However, it’s simply a Rally Sport with the D91 stripe that was standard with the SS package. Engine is a 275-horsepower 327, the top engine for the “regular” Camaro save the Z28. Note the new-for-1967 Rally wheels, which featured a shallow center cap different from all subsequent years.

Here’s a Granada Gold 1967 SS 427. Basically the big brother to the Chevelle SS 396, the Z24 SS 427 package included a 385-horsepower 427 (L36) paired to a heavy-duty 3-speed manual transmission, hood with special ornamentation, SS 427 badges fore and aft, special 427 engine badges unique to the Z24, SS wheel covers, Strato-bucket front seats with console or Strato-black seat with armrest, and a host of other upscale trim in and out.

This Silver metallic R/T convertible with red interior looks sportier thanks to optional steel Road Wheels compared to the blue one above, but the latter looks more purposeful.

Compare the Dodge above with the similar Silver metallic 1967 Plymouth GTX here. The GTX’s equipment list was similar to the Coronet R/T’s, though the 440 was called Super Commando and it was topped by a hood with twin simulated air intakes. A notable feature of the GTX was the pit-stop gas cap. This ’67 features the standard 440 and the optional chrome Custom Road Wheels, which were not available with disc brakes.

This pretty Mauve metallic Hemi GTX was not originally ordered this way, but it was built the way the owner wanted. Note the Sport stripes, which were an option that spanned the hood and trunk lid.

Do you think this triple black 440 GTX looks sinister as-is? Or do you think it would look better to set it off with stripes? White, dark red, dark blue or medium copper were available, all with matching interior if preferred.

The Silver Bullet is arguably the most famous GTX of them all (Black Ghost who?), a street racing legend from Detroit. Jimmy Addison was a mechanic at a Sunoco along Woodward Avenue in Birmingham (a Detroit suburb). Ted Spehar, the owner of the gas station, built race engines on the side, and it is believed that he sold Addison parts for his street-racing pursuits. In fact, it’s believed the Silver Bullet was implicitly used as a skunkworks of sort. This explains how the scene on the street was as powerful a marketing element as anything else. Lightweight components, such as doors, hood (taken from the “R023” Hemi Belvedere II Super Stock), windows and more reportedly removed 500 pounds from the B-body.

The Hemi was no longer measuring 426ci either, now 487 thanks to a 4.25-inch stroker crank, oversize TRW pistons, Racer Brown camshaft, aluminum cylinder heads and more. In street trim with M&H drag slicks, the Silver Bullet ran mid-10 ETs. For over two decades, the Silver Bullet has been in the collection of Harold Sullivan.

How about Shelbys? Like the Mustang, the Shelby GT was redesigned for 1967. While the Mustang somewhat grew up, the Shelby lost some of its road-racing charm but moved up in class as a deluxe pony car with show car-inspired styling.

The GT350 was joined by a GT500, which was powered by a “Special Interceptor” 428 with 355 horses from dual quads. This Nightmist Blue big-block is car number 706 and features inboard high beams (outboard units would become a running change due to some states requiring distance between the lights) plus four-speed with 3.50 gears and rare Parchment interior.

The Hi-Po 289 was carried over for the GT350, though the added weight was detrimental to its performance. This Raven Black car is car number 051 and has several features unique to early cars, like the inboard lights in the grille and the accessory brake/turn signals on the scoops on the C-pillar. Originally sold new at Gotham Ford in Manhattan, this four-speed Shelby was bought and exported to Peru by race driver Cristobal “Batman” Gajluf.

This 1967 GT350 was originally sold at Presidential Ford in Philadelphia. The Wimbledon White steed is equipped with a four-speed with 3.89 gears and all the usual equipment you’d find on Shelbys including Competition Handling Package, shoulder harness, deluxe steering wheel, 140 speedometer, 8,000 rpm tachometer, and oil pressure and ammeter gauge, among others.

To see more coverage on MCACN 2022, follow this link.