Do the planets align for us this week? 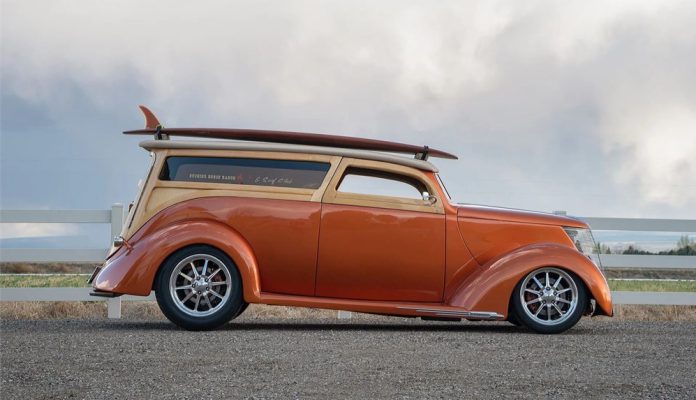 When selecting Friday AutoHunter Picks, I try to find either a theme among the cars or a wide selection of vehicles that may have something of interest to someone out there in Readerland. Both of these are dependent on the cars that are currently listed, so win some, lose some.

Do you think the planets have aligned for us this week? Let’s start with a Ford hot rod.

1937 Ford Woody Wagon
Nineteen thirty-seven was the first of the Fords with integrated headlights. Woodies have had a strong presence in hot rod culture, so this 1937 resonates. Additionally, this Woody appears to have had a heavy hand in its design, tilting the wagon’s proportions in an admirable direction. Alas, my naivete is showing as the build includes a Downs Industries composite body sitting on a C4 Corvette chassis.

Nonetheless, this Sunburst Bronze Woody was the recipient of a $200,000+ build around 20 years ago. Power comes from a GM “corporate” 383 stroker paired with Holley Sniper fuel injection and a 700R4 four-speed automatic transmission. Plenty of modern conveniences, like Vintage Air climate control system, tilt steering column, air conditioning and power disc brakes, will make you forget that you own the road.

1978 Chrysler New Yorker
I have always liked these, whether they’re called Imperial or New Yorker Brougham (the design was an Imperial from 1974-75, then New Yorker Brougham from 1976-78). Like the behemoths from General Motors, I think Chrysler’s “Fuselage” designs aged well as the decade marched on, with the design becoming less hulking and more trim after 1973. Truth be told, I’m a sucker for hidden headlights and, when I was a kid, I was intrigued how Chrysler products’ headlight lids dropped down instead of lifted up like most cars.

2008 BMW M3 Convertible
The BMW M3 has often won accolades for being the most well-rounded car in the world, giving a true five-seater sports car chops at a price that many can afford. The M3 formula, which was all about a fantastic inline-six, was tweaked in 2007 thanks to a new 414-horsepower 4.0-liter V8, the first and only time the M3 would use the V8 configuration. New was a dual-clutch transmission, as the M3 previously was only available with a manual transmission.

There’s something to be said for compact V8s, but purists may also say there is something to be said for high-strung sixes. This 97,446-mile convertible, one of 16,219 built over six years, is black (naturally) over a tan leather interior and features 19-inch Style 220 wheels. Inside, you’ll find a six-speed shifter, dual-zone automatic climate control, iDrive, AM/FM/CD and metric gauges. If you lust after a Porsche Boxter yet need something more practical for the family, then your car has arrived.

1969 Pontiac GTO Convertible
When I was a kid, I wanted a 1969 GTO Judge. It wasn’t the Carousel Red color as much as the pop art graphics, as I also was into Fillmore West music and concert art. Unfortunately, I have never owned a Judge, plus my adolescent desires have evolved, yet wanting a Judge reflects more of a soft spot than a lack of sophistication on my part.

This 1969 GTO convertible is not a real Judge but has a proper Ram Air III engine, which was included in the Judge package. The original window sticker shows it was originally painted Mayfair Maize with a green interior, standard 400/350 and full wheel covers, so would it be fair to assume this car was originally bought by a mature adult? Plus, it was originally sold in Oshawa, Ontario, so GM of Canada documentation is available for the purist who wishes to have it both ways.