Canadian cars in the spotlight 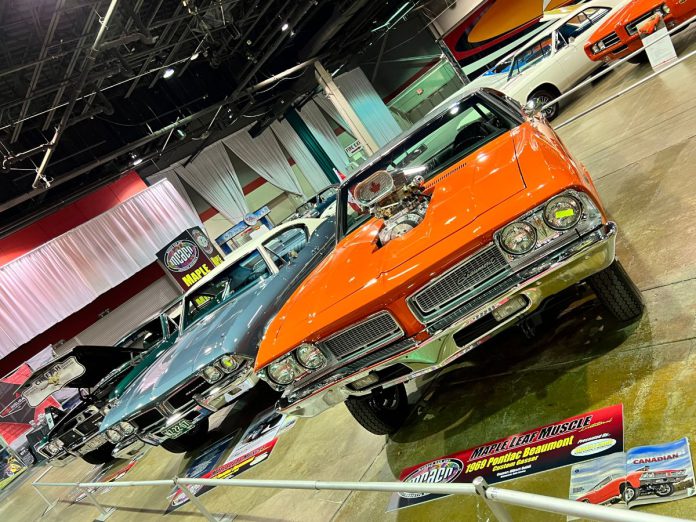 The American public school system does a poor job of educating us on our continental compatriots north of the border. Can you name all provinces and territories? Did you know Hawaiian pizza was invented in Canada? And my wife would be happy to point out that Michael Bublé was born and raised in British Columbia.

Canadians share the exact same classic car market that we do, but they also have several unique twists that are not shared with the lower 48 + 2. The reason for that were due to tariffs that created unique models that may have differed from American counterparts in styling, if not engine. And of course, the names! Dodge Mayfair (a Plymouth with a Dodge front end), Pontiac Laurentian (a Pontiac on a Chevrolet chassis with Bow Tie power) and Meteor (a Canadian-specific brand sold by Mercury dealerships) were but some of the novel automobiles that have confounded Americans for decades.

Since Canada is our closest friend, it only seemed like a natural to celebrate the friendship at Muscle Car and Corvette Nationals (MCACN) 2022 with the Maple Leaf Muscle Invitational. “Back in the day, American Muscle made a big impact on our Canadian friends, and they enthusiastically purchased plenty of amazing American Muscle machines,” say the promoters of MCACN. With that in mind, let’s start with some of the more unique Canadian vehicles that were never available in America.

Beaumont originally started off as the top trim level on the Acadian, which was a Nova-based vehicle sold by Pontiac dealerships. With the advent of the Chevelle in 1964, the Beaumont became Canada’s mid-size marque sold alongside the Pontiac Strato-Chief, Laurentian and Parisienne. The top Beaumont was the Sport Deluxe and, in 1966, the Sport Deluxe was available with an “Econo-Jet” 396 (Chevrolet called its “Turbo-Jet”). Sometime after the 1967 Beaumont was introduced, the 396 was made standard for the Sport Deluxe. This ’67 bears more than a passing resemblance to a Chevelle, but note the split grille that fits in with being part of the Canadian Pontiac dealer network (the dashboard also was sourced from Pontiac).

Here’s another 1967 Beaumont, but this one was originally sold at by Conroy Pontiac of West Vancouver, British Columbia. The dealership developed the Cheetah package much like many Chevrolet dealerships throughout America developed their own to upgrades what General Motors would not. Some Cheetahs featured mild tweaks but, in the case of George Pappas’ Sport Deluxe, it received a 427 transplant.

Compare the styling of the 1968 Beaumont with what Chevrolet was selling and note the similarities and differences. And then note the differences between the ’68 and this modified 1969.

Here’s another vehicle only available in Canada. While it may not come off as anything special, think for a moment that the Dart Swinger 340 was only available in 1970, but a similar car was produced in 1971-72 thanks to the powers-that-be of Crosstown Motor City from Edmonton, Alberta. While there was a Demon 340 available from Dodge, Crosstown thought there was a market for an even more economy-minded performance car, so Crosstown convinced Chrysler’s head office to produce a handful of Dart Swinger Specials (the cheapest two-door Dart) and equipped it with the 275-horse 340. It is believed 82 were allotted by Chrysler, but Crosstown was not able to handle them all on their lot, so Crestview Dodge of Regina, Saskatchewan took 25 of them and two more were dropped-shipped to a dealership in Fort St. John, British Columbia. The same was repeated for 1972, though the order was reduced to 50; in the end, 30 were built, with Crosstown getting 23, Pembina Dodge in Winnipeg, Manitoba receiving five and a dealer in Abbotsford, British Columbia receiving two.

This Polara 500 was the sportiest Dodge for 1964, complete with a high level of trim, bucket seats and console. This 383-powered two-door hardtop was built in Windsor, Ontario.

During the heyday of the 1960s, the L88 was the ultimate Corvette until the aluminum version — the ZL1 — appeared in 1969. This 1969 L88 Corvette is one of 116 built and one of a handful sold new in Canada. All 116 featured F41 suspension, Positraction, J56 special heavy-duty brakes with J50 vacuum power assist, and transistorized ignition.

For 1969, Rocky Mountain Life Insurance of Alberta ordered 98 special-order purple Cougar XR-7 hardtops for anyone in the sales force who earned at least $2,000 in sales per month. “Every time you see a purple Cougar, you see a Rocky Mountain man!” said the ads. Someone on the street must have loved that color because (s)he ordered a 1969 Cougar XR-7 convertible with the 428 Cobra Jet in that purple.

From 1968-70, Oldsmobile’s W-31 package helped make any F85 or Cutlass S arguably the fastest mid-size small-block of the era. Painted Sable with gold stripes, this 1969 F85 is one of 212 built with the W-31 package. Dig the air induction scoops under the bumper!

The sales success for 1968 became an even bigger success for 1969. The Plymouth Road Runner outsold the Pontiac GTO and expanded to include a convertible — somewhat out of character for a cheapie performance car, but sometimes the bean counters win. Of course, the 426 Hemi was available as an option over the standard 383 (plus a 440 six-barrel mid-year), with 421 U.S.-spec hardtops having that engine and another 14 being built for the Canadian market.

The 1969 GTO Judge was American as apple pie, a car from Michigan based on a bit from an American comedian. Of course, it also was among the first wave of be-spoilered and -striped muscle cars in the market, so it had mass appeal to those who truly wanted to make an entrance. In the case of Bruno Beltrame’s Canadian Judge, this Judge was originally equipped with the Ram Air IV engine, though Judges weren’t built in Oshawa, Ontario until 1970.

Only eight Trans Am convertibles were built, which is among the rarest muscle cars ever produced. Would you believe three were sold new in Canada? All were white with blue stripes, but the eight feature variations with their tops and interiors, along with the four/four transmission split, that make each unique.

Wade and Aster Ogle’s 1970 Charger R/T SE has it all! Not only is it Panther Pink (FM3), one of the rarest and most outrageous colors offered in 1970, but it’s also equipped with some fantastic options like 440 Six Pack, four-speed manual, SE package, rear spoiler, and V21 hood stripes with V24 “Performance Hood Paint” engine call-outs.

Oldsmobile built 264 1970 4-4-2 convertibles with the W30 package, though there is no information how many of them were sold in Canada. This one features the extra-cost Aegean Aqua paint, one of four optional colors available for the 4-4-2 and other Oldsmobile A-bodies.

This Tor Red 1970 Hemi ’Cuda originally sold new in Burlington, Ontario. The first owner owned a furniture store and kept the ‘Cuda in the warehouse most of the time; it then went to a new owner in North Bay who modified it with tunnel ram, hood scoop and wheelie bars. Mopar collector Rick Simpson bought the project in 1984 and, over time, put it back together. Factory options include automatic with 4.10 gears, console, painted mirrors and more, though Rick added the front Elastomeric bumper.

Hemi production fell drastically in 1971 after already falling in 1970. Hemi Charger R/Ts used to number in the hundreds but, for 1971, it was in the double-digits. For the U.S. market, 63 were built, plus another 12 were exported to Canada. Both of these cars were part of a batch of six ordered through one dealership in Medicine Hat, Alberta, with these two being sequentially numbered. Note the typical stripe from the A-pillar to the rear fenders is missing from both of these R/Ts because they both were ordered with stripe-delete.

Only 11 1971 Hemi ’Cudas were built for the Canadian market. The FJ6 Sassy Grass Green ‘Cuda on the right is one of those, while the one on the left is an American-spec car. The pairing was done to symbolize the close friendship of the neighboring countries.