Revival of a classic 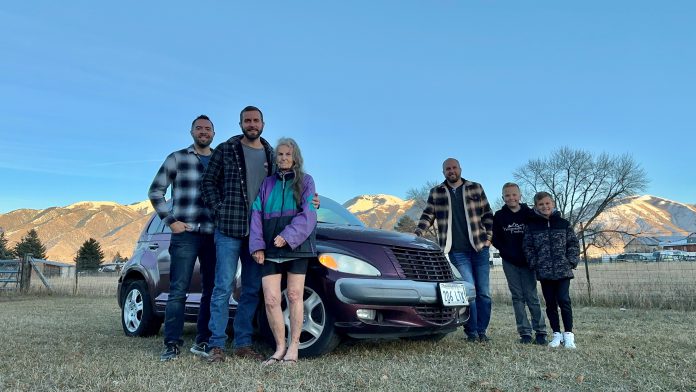 Retro-styled vehicles were all the range around the turn of the 21st century. The Chevrolet HHR, Plymouth Prowler, Volkswagen New Beetle, and Ford Thunderbird were a few examples of cars from around 2000 that harkened back to decades-old body lines.

The PT Cruiser first debuted in model year 2001 with lines drawn by designer Bryan Nesbitt. It slotted in the compact class and was designed with retro styling that evokes cues of the 1930s and 40s. Reception was warm, and Motor Trend awarded it with “Car of the Year” accolades. Among the early adopters of this unique design were my grandmother and her husband Russell who bought a new 2002 PT Cruiser Limited Edition in Dark Plum Pearl.

On a recent holiday trip to northern Utah, my brothers and I got the idea that we should get grandma’s 2002 Chrysler PT Cruiser running and take it for a spin.

By many measures, this shouldn’t be a big deal. The vehicle is barely 20 years old and according to some definitions it hasn’t yet achieved “classic” status. But this PT Cruiser, at just over 120,000 miles, had been parked for over six years since my grandma’s husband Russell passed away in November 2016. Its license plates expired in October 2017. Some of my favorite YouTube videos feature revivals and re-awakenings. I love a good “barn find,” so I figured it would make a fun rewarding afternoon activity to see what we could do.

The Dark Plum PT Cruiser hasn’t seen a night in a garage its entire life. Most of its travels for its first decade included daily trips to the mall and Sam’s Club. Every Friday, it made the 50-mile round-trip trek from Logan, Utah to Franklin, Idaho so grandma and Russell could purchase lottery tickets. There was good exercise, but the outside elements started taking a toll on the cosmetic condition. Rust consumed the right rear quarter panel and a large section of the front fender, and the clear coat failed on multiple panels.

The PT Gets a Revival

The day after Thanksgiving, we showed up to revive the PT Cruiser and it was sitting on four low tires. The electrical jump box that my dad provided did not provide enough juice to turn the motor over, so we pulled my brother’s Ram pickup over to provide a more substantial jump with cables. That did the trick. We weren’t sure how the PT would run on six-year-old gas, but it seemed to idle fine.

The automatic gearshift felt sloppy, and it was difficult to tell which gear was engaged. But we rolled out and took it easy on surface streets as we drove to my dad’s place where we filled up the flat-spotted tires. Upon returning to grandma’s, we parked the PT in the exact same location where it had been prior to our visit (which was easy to see thanks to the tire marks in the concrete). Time will tell whether it rides again.

Some of the PT Cruiser’s engineering was related to the Dodge Neon compact car: Powertrain engineering centered around a 1.6-liter inline-four paired with a four-speed automatic transaxle or a five-speed manual transaxle directing power to the front wheels. At 150 horsepower, it was hardly a dragracer, but Chrysler made some updates in the years that followed.

In 2003, a 2.4-liter turbocharged variant of the PT Cruiser debuted with a stronger 215 horsepower output. In 2006, styling was updated to include scalloped headlights, a new front fascia, revised taillights, and a refreshed center stack on the interior.

Many special trim versions of the PT Cruiser were offered over the years. Some came with simulated wood panels, some came in special Route 66 livery, some were styled as a tribute to the Pacific Coast Highway, a convertible became available, and there was even a two-tone Couture version. The overall design language, however, was unchanged for nearly a decade.

The PT Cruiser lived all the way until 2010 before being discontinued. That final year, only the Classic trim level with the lower-output four-cylinder was offered. The vehicle went out without much fanfare. Today, the PT Cruiser has a small but devout following. There is even a website dedicated to data on performance, repairs, awards, and accessories.

Maybe grandma’s PT would make a good candidate for restoration to one of those collectors! Until then, it has resumed its spot as a placeholder in her driveway for passers-by to admire.