Another Glance at Barrett-Jackson Scottsdale 2023

Some automotive goodies to look forward to in January 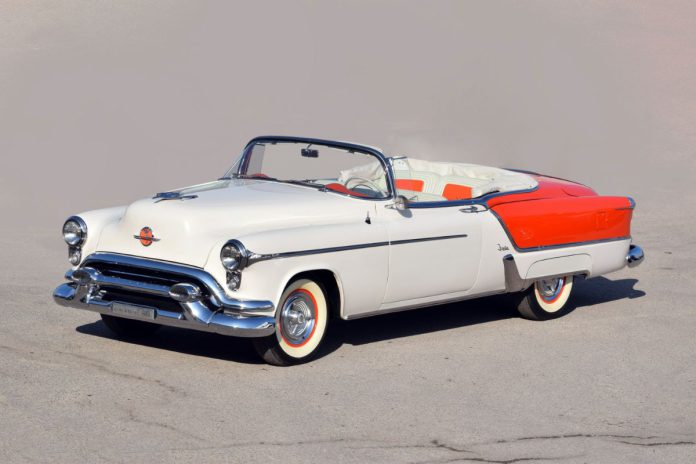 If you’ve ever been to WestWorld, the location of Barrett-Jackson’s cirque de voiture in Scottsdale, you know it’s huuuuuuuge! And why not? The number of cars to be auctioned is higher than I’m able to count, and the sheer mass of cars means you’re bound to find something that moves you. So, what happens when you have the arduous task of picking three vehicles to highlight? It’s a quandary best handled by dwelling on little and simply running with three.

So, what has been curated for you, fellow auto enthusiasts?

1953 Oldsmobile 98 Fiesta
In 1953, General Motors introduced a trio of fancy, semi-custom convertibles (Buick Roadmaster Skylark, Cadillac Series 62 Eldorado and Oldsmobile 98 Fiesta) to promote the corporation as style leaders in the industry. Beltlines were trimmed to create a lower look and, in the case of the Fiesta, the wraparound windshield would become an industry standard within several years. The Fiesta was almost twice as expensive as your run-of-the-mill 98 convertible, which was not a cheap automobile to begin with.

Only 458 Fiestas were built, the rarest of the trio. This example to be auctioned in Scottsdale next month was treated to a “comprehensive” restoration that includes attention to detail in the engine bay, interior, undercarriage and trunk. And since it’s a Fiesta, it’s loaded with every option standard except air conditioning. If there is one Oldsmobile that could be considered a chariot, this would be it.

1963 Dodge Dart GT
I’ve never been a Dart fan, but that’s because I’ve never been a compact car fan. However, I have evolved over time so, over the years, I’ve learned to appreciate certain Darts, especially considering Chrysler’s flirtation with turbines.

This 1963 Dodge Dart GT has been given the pro-touring treatment and, dare I say, its execution is successful to the nth degree. The A-body is painted in PPG Sage Green and wrapped in Fresh Spring vinyl for a stunning look depending on the light. Power comes from a 2005 5.7-liter Hemi V8 paired with a 545RFE five-speed automatic (a transmission most often associated with Jeeps and Dodge trucks). Out back, a Currie nine-inch rear and Detroit Truetrac differential lay down the horses via 3.50 gears. Underneath, you’ll find Billet Specialties 17- and 18-inch Apex-G wheels, Reilly MotorSports AlterKtion front suspension and four-wheel Wilwood disc brakes. The upgrades didn’t stop with the exterior, of course, as AutoMeter carbon-face gauges keep tabs on the Dart’s vitals, and Cadillac CTS-V buckets keep you poised and comfy.

Only 1,533 Camaro SSs were built with the LS3 in 1971, plus this particular vehicle is painted Placer Gold, a new color for the model year that has become a favorite with collectors. This particular vehicle comes with the build sheet and original window sticker, and its restoration follows the factory build including rebuilt numbers-matching engine, M20 wide-ratio four-speed transmission, Quadrajet carburetor, alternator and rear differential. Documented by Jerry MacNeish’s Camaro Hi-Performance, Inc., this vehicle just may be the quintessential big-block Camaro for 1971.