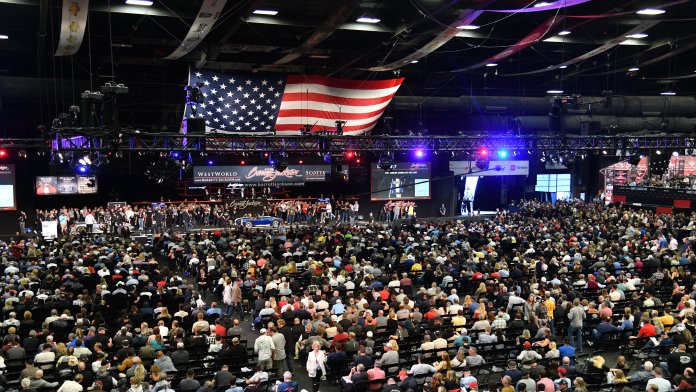 Barrett-Jackson Collector Car Auctions is set to kick off another exciting event season in Arizona once again with its 2023 Scottsdale Auction, January 21-29 at WestWorld of Scottsdale. As event season begins with Barrett-Jackson each year, the auction company welcomes hundreds of thousands of guests to take part in the world-renowned automotive lifestyle event, and the 2023 action-packed auction will feature not only an exceptional docket, but also a variety of activities and experiences beyond the block for auction-goers of all ages.

“This past year marked the most successful year of auctions in Barrett-Jackson’s history, setting new heights and breaking hundreds of world auction records, and we are keeping our foot firmly on the accelerator heading into 2023,” said Craig Jackson, chairman and CEO of Barrett-Jackson. “This year’s Scottsdale Auction will once again provide an unforgettable experience for our guests with an extraordinary docket and a host of activities that demonstrate why we deliver The World’s Greatest Collector Car Auctions.”

The 9-day automotive lifestyle event will kick off Saturday, January 21 with Family Day presented by QT, when children 12 and under receive free admission with an accompanying paying adult. On Family Day, Barrett-Jackson will host a series of exciting hands-on activities for enthusiasts of every age, including STEM Fest, which will allow young auction-goers the opportunity to learn and participate in several immersive Science, Technology, Engineering and Math exhibits. One of the notable exhibits will be the capsule from the Blue Origin rocket, which will be showcased at STEM Fest before moving to the Exhibitor Marketplace for the remainder of the event. Saturday will also highlight the coveted Barrett-Jackson Cup presented by Castrol, where all 50 custom car and truck entries will be on display in the auction arena and paraded across the auction block before moving to the South Showcase to remain on display for the entire week. The winners of the Barrett-Jackson Cup Ultimate Best in Show and the People’s Choice award will be announced the following Saturday, January 28. Additionally, the Boy Scouts of America will be participating in a pinewood derby competition and earning their automotive merit badges.

On Sunday, January 22, Barrett-Jackson will host the Future Collector Car Show presented by Meguiar’s (FCCS) on the WestWorld Polo Field for the first time. FCCS is a family-friendly, concours-style event featuring vehicles that best represent the future of the collector car hobby with the goal of celebrating the cars we love today and the future collectibles of tomorrow. FCCS will also feature a fashion show, live DJ and sponsor exhibits. Prior to the show, judges will hand-pick the top cars for each category from the applications submitted. Every vehicle entered in the show qualifies for the coveted Best of Show trophy, a People’s Choice award selected by spectators on-site and various Best in Class awards. Applications to display a vehicle at FCCS are available online at FCCS.Barrett-Jackson.com and the application deadline is Tuesday, January 2.

Throughout the week, guests may also immerse themselves in a variety of other experiences, including luxury shopping within the Exhibitor Marketplace, learning from industry leaders during the “Behind the Hobby” Collector Car Symposiums and adrenaline-pumping Thrill Rides, Hot Laps and Off-Road Experiences with leading automotive manufacturers. Guests may also kick back and enjoy one of several food and beverage options alongside outdoor firepits or in front of the live music stage. Barrett-Jackson features several delectable food trucks, craft beers, cocktails and a cigar lounge as well.

The 2023 Scottsdale Auction docket features many extraordinary early consignments including the 1966 Shelby Group II Mustang that was built for legendary racer Ken Miles and a highly desirable 2005 Porsche Carrera GT, one of only 644 sold in the United States during its production run from 2004-06.

In addition to the Shelby Group II Mustang and 2005 Porsche Carrera GT selling with No Reserve, Barrett-Jackson’s Scottsdale Auction docket will feature several Ford GTs, including a Frozen White 2020 Ford GT Carbon Series, a 2019 Ford GT Lightweight and a second-generation 2006 Ford GT that is one of two with factory stripe delete and one of only 75 finished in Speed Yellow. The breadth of the docket will also include many exceptional Resto-Mods and customs, including a 1967 Chevrolet Corvette custom convertible built by Jeff Hayes Customs and finished in Dirty Martini Green, as well as a remarkable 1956 Lincoln Continental custom Mark II built locally by Sic Chops in Cave Creek.

“Every January our Scottsdale Auction ushers in a renewed excitement for the collector car hobby over the coming year,” said Steve Davis, president of Barrett-Jackson. “For more than a half century, Barrett-Jackson has created some of the most incredible collector car moments that have occurred here at home in Scottsdale. We’ve built the ultimate lifestyle event and invite everyone to help us write the next chapter in automotive history.”