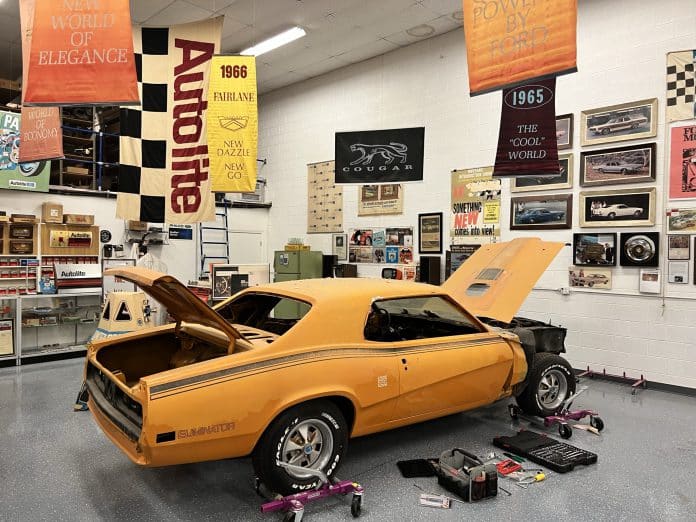 In the collector car world, there are many companies that support your restoration efforts through their expertise in bodywork, mechanics, parts — both reproduction and NOS — and what have you. When it comes to brands built by the Ford Motor Company, few restoration companies have achieved the stature that Marti Auto Works has achieved. The Arizona-based shop has attained this position due to its breadth of knowledge and good customer service, but the crowning achievement is being the licensed distributor for Ford invoices.

Arizona native Kevin Marti wasn’t originally a Blue Oval guy, having eyed a 1971 Dodge Challenger convertible at one point in his youth. Nonetheless, he ended up with a Cougar Eliminator, starting his love affair with all things Dearborn. It was while fixing up his Cougar and the difficulty he had finding parts that he realized there was a need to be filled. A mechanical engineer by training (with some experience in data entry systems), Marti consulted with several technicians at his job at Sperry Flight Systems who just so happened to be machinists too. He gave them designs, and they helped manufacture the product. Car-show participation aroused interest because people would ask, “Can you make so-and-so part for me?” After a few years of this, Marti left his job to officially start Marti Auto Works.

“Marti Auto Works’ goal is to help people out,” says Kevin. “My goal is to hone in on what’s true.”

The business grew, so Marti Auto Works went from a leased office space to constructing a company building with room to grow. Eventually, other products like buck tags, axle tags, engine tags and window stickers were added to the Marti menu. Thanks to an arrangement with Ford Motor Company, Marti began purchasing obsolete original parts from Dearborn, adding to the company’s roster of restoration parts.

Around this time (late-1990s), Marti entered into an agreement with Ford Motor Company to license the database of FoMoCo invoices that were originally recorded in IBM punch cards. Thanks to Marti’s experience with 1970s-era data entry, he was able to bring all that analog information into the digital world.

Interestingly, Marti Auto Works leases the information from Ford Motor Company, so the company must pay royalties every year for access to the database. There is a huge load of responsibility (and a boatload of lawyers) involved in maintaining such a database, even if a bunch of obsolete statistics seemingly don’t appear to be pertinent to Ford’s current operations.

Today, these are the core Marti Auto Works categories (click on the headers to access the links):

Reproduction Parts
Mustangs are not the only vehicles that deserve love! Luckily, Marti Auto Works reproduces parts for FoMoCo vehicles from the 1940s to today. Most of these parts are for underneath the hood, going beyond the rubber into such tchotchkes as hose clamps, radiator caps and starter solenoids.

NOS Parts
Of course, Marti Auto Works doesn’t manufacture NOS parts, but the company has a nice collection of items at hand for your restoration needs, so it pays to check and see if it has what you’re looking for. A random scan of the website shows a 1970 Mustang Shaker hood, brake pads for a 1967 Cougar with a manual transmission, and a backup light switch for a 1972 Torino with a 351 CJ 4-speed.

Original Invoices
Maybe you’ve heard of the Eminger Report? Lois Eminger was a Ford employee who had helped collector requests for invoices. So, when she caught wind Ford was going to destroy them, Lois saved a trove that date back to the late 1950s. While Lois is no longer with us, her memory — and the documents she saved — are safe at Marti Auto Works. According to Marti, these are the original documents that were used by Ford for billing to the dealer, so it almost looks like a nondescript window sticker that shows wholesale and retail costs of a particular vehicle plus all the options and shipping information.

Window Stickers
Exact replicas and reproductions are available for your Blue Oval product. They are authentic down to the last detail including original coloring, font (including the correct width, height and spacing), layout and terminology (more on that below), among other things. Marti even accounts for mid-year changes like price and design/layout.

Books
Marti Auto has written three books for those into production statistics and decoding. For the former, there’s “Mustang … by the Numbers” and “Cougar … by the Numbers.” And then there’s “The Mustang and Cougar Tagbook,” a guide to help decode the engine, transmission, carburetor, steering box, power steering pump, axle, radiator, buck tag, VIN, owner card and door data tag for 1965-73 Ford and Mercury pony cars.

If you are someone who bleeds Ford blue, it is possible you have noticed terminology in different documents that don’t agree with each other, like “gray” being used in one item and “grey” being for another. Consistency is good (and more of a modern phenomenon to automakers, to be honest), but consider this: Ford was a global company and, considering Canada was just a bridge or tunnel away, it’s quite possible the Queen’s English (and “grey”) was used and no one noticed. Another common term that varies is “molding” versus “moulding.”

Marti Report
Every owner of a FoMoCo product from 1967-2017 has the opportunity to purchase a report that details much of what you’d find on an original invoice combined with information like order date, build date, buck date, and production statistics like how many built in a certain color, color/interior combo, engine/transmission combination and a randomly selected option. Though not originally branded “Marti Report,” that’s what people started calling it.

Deeper statistical reports can drill most cars down to 1 of 1 with a particular combination of options, though the most interesting drills are the ones with the fewest steps to get to 1-of-1 status.

Of course, there are situations with owners discovering something fishy with their respective cars after ordering a Marti Report — maybe the invoice doesn’t match what the car is in front of them. Fraud is certainly not a new phenomenon in the automotive hobby, but few marques have the luxury of having documentation to prove the pedigree of a vehicle.

“Truth is one of the highest priorities for me,” says Kevin, “even if it hurts.”

To discover how Marti Auto Works can meet your FoMoCo needs, visit www.martiauto.com.

A Gaggle of Automotive Turkeys