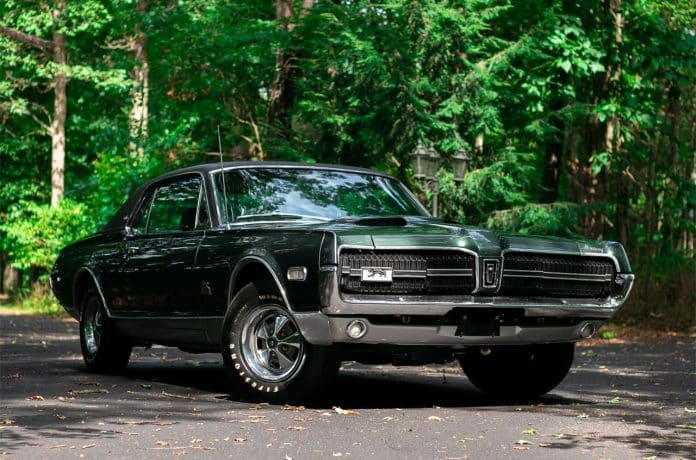 Mercury introduced the GT-E package in 1968 for Cougar and Cougar XR-7 models. Standard was the NASCAR-bred 427, now with 390 horsepower thanks to a hydraulic camshaft. An automatic transmission was the only way to go, but everything else about the GT-E was fabulous, including how it was trimmed: horizontal bars on the grille, blackened taillight louvers and silver trim running below the character line. A nice example of the 1968 Cougar XR-7 GT-E is our Pick of the Day. It is listed for sale on ClassicCars.com by a private seller in North Liberty, Indiana. (Click the link to view the listing)

What’s interesting about the Cougar GT-E is that it’s the only 1968 FoMoCo product to be produced from the factory with the 427. The engine was listed as an option in brochures for the Mustang, Fairlane/Torino and Comet/Montego/Cyclone, but FoMoCo only installed the FE-series engine in the Cougar. While not a drag scorcher like its equipment may imply, that part was solved in April 1968 when the 428 Cobra Jet was introduced. CJ-equipped GT-Es can be identified by a noticeably larger, functional black hood scoop (the 427’s was non-functional) and black stripe running from the scoop to the nose. Only 37 were built — much rarer than the 357 built with the 427, but collectors gravitate to the 427 due to its NASCAR connection and mystique.

This 76,351-mile Cougar XR-7 GT-E has received a frame-up restoration in 2010, with NOS parts used when needed. Augusta Green may not resonate like Cardinal Red, but it’s the same shade that was used on the Bullitt Mustang, so maybe being green ain’t so bad after all, especially with the contrasting silver. Being an XR-7, the leather interior was standard, with this one being black with center console. Other options per the Marti Report include power steering, power front disc brakes, black vinyl roof, AM radio, tinted glass, 3.50 gears sans Traction-Lok, chrome styled steel wheels and headrests, plus the most unusual options of the bunch: rear shoulder harness. This Cougar is also shod with period-correct Firestone Wide-Ovals.

“Email with serious questions about the best-of-show-winning 1968 Mercury Cougar XR-7 GT-E,” says the seller. “Registered with the Cougar National Database and the Cougar GT-E Registry.” These cars aren’t cheap, so the $129,900 asking price is not unusual. But compare it to a Shelby Mustang and you’ll be paying just as much but wouldn’t have the legendary 427, so perhaps this is a better value than initial impressions would suggest.

Cars on a Silver Platter