A host of picks to pique your interest 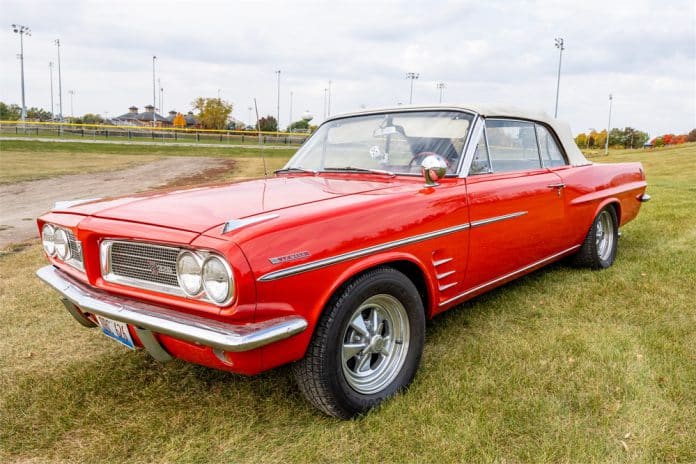 The Easybeats had a hit in America with “Friday on My Mind” in 1967. I first became aware of the song from David Bowie’s cover, but the original is solid. The band’s rhythm guitarist was George Young, the older brother of soon-to-be-famous Angus and Malcom Young of AC/DC, and George would go on to co-produce several of their early LPs. What does this have to do with cars? The below AutoHunter vehicles are on my mind for Friday.

1963 Pontiac LeMans Convertible
These are a curiosity to me. Initially part of a wave of “senior compacts” from General Motors, they eventually became proper mid-size vehicles in 1964. They featured a transaxle that was unique for a front-engined car at the time in Detroit. Pontiac even installed the 421 Super Duty in 11 or 12 of these cars, including some wagons, which is kinda crazy.

For 1963, Pontiac continued to offer the inline-four but replaced the Buick aluminum V8 with a new 326 (though it actually measured 336ci for 1963 only) with up to 280 horsepower. The one in this 1963 LeMans has been bored to 350ci (a size that Pontiac wouldn’t offer until 1968) and features several upgrades like a more radical camshaft from COMP Cams, forged JE Pistons and a Tri-Power intake. In some respects, this Poncho comes off as a prototype of the GTO that would come the following year after some subversive noodling from John DeLorean.

1984 Maserati Biturbo
I remember these cars when new. They were not common, but they helped carry the Maserati brand during its lean years. A memory I have is going to the Philadelphia Auto Show and being amazed how cramped the interior was. My dad had a soft spot for the Quattroporte from the 1970s, and the Biturbo shared similar styling in more compact form, though he never gravitated to these. Probably a good thing since he wasn’t so much a “car guy” as much as a guy with a passing interest in cars, and I’m sure he wouldn’t have tolerated its quirks.

According to this webpage, 4,577 Biturbos were exported between 1983-85, so it stands to reason why sightings were infrequent, but how many of those featured the five-speed manual like this 1984 Biturbo? It features the twin-turbo 2.5-liter V6 with 182 horsepower, which was quite good in the era. The seller claims to have owned the burgundy Italian for 30 years, with the odometer currently showing 42,000 miles. If there is such thing as a car with brio during the Malaise era (though technically the guy who coined the term cuts it off at 1983), this one has it in spades.

1978 Chrysler Newport
These were everywhere, and then time took over. Like General Motors, I think the Chrysler Corporation grew the styling of its large cars nicely throughout the decade. I wouldn’t be surprised if Mopar fans preferred the styling of these to the original 1969s, which come off as somewhat massive and bulky in comparison. Nineteen seventy-eight also was the last year for the C-body until Chrysler’s R-body carried the full-size torch for the corporation thanks to clever packaging of the midsize B-body platform.

This 1978 Chrysler Newport features the big-block 400 four-barrel hooked to (what else?) a TorqueFlite automatic. Nothing’s quite outstanding about it other than it being one of the last of the behemoths, which goes a long way to my eyes. A nicely integrated RetroSound audio system helps make cruising more contemporary in case you prefer Fall Out Boy over Frampton. Sometimes you find cars like these painted in primer and modified to resemble an urban assault vehicle, but I hope the winner of this AutoHunter auction respects its condition as it sits.

1964 Chevrolet Impala Super Sport
Before there was a GTO, there was the 409. The Beach Boys made it legit for the general public, though Chevrolet didn’t need the help because no one had more dealerships or more customers. For 1964, the 409 was available in three tunes of horsepower: 340, 400, and 425. Both the latter two featured solid lifters and mostly differed by carburetion, with the 425-horse version featuring dual-quads. Though available in any full-size Chevy, most 409s seem to have been installed in Super Sports versus the racier (read: cheaper and lighter) Biscayne and Bel Air. Many folks think of the Super Sport as a performance model, but from 1962-68 it was a trim level or package as the 230 six was available for most years.

This 1964 Chevrolet Impala Super Sport includes the M20 wide-ratio four-speed, which actually was an option over the standard three-speed manual on the column. Manual steering and brakes makes this Chevy somewhat tough to handle in certain conditions and somewhat unusual considering the Super Sport was the top trim level. Overall, this is a very legit piece of early muscle, a worthy competitor to the GTO before the Chevelle SS 396 reached regular production status in 1966.