Rolls-Royce Spectre Would Have Made the Queen Proud

Rolls EV creates a paradox for the well-heeled 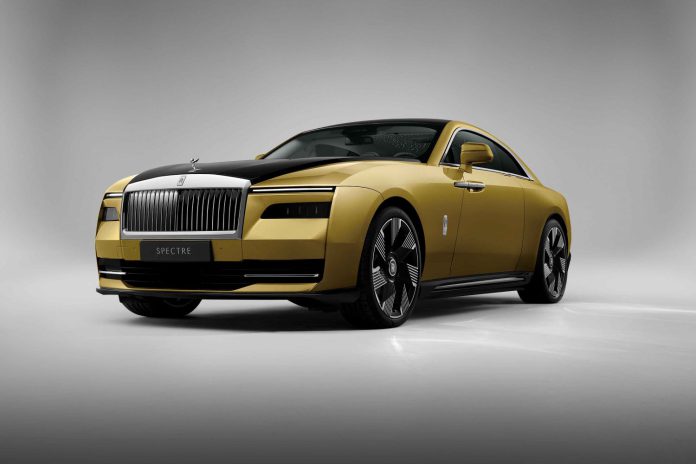 Remember when you could go to Los Angeles and Rolls-Royces were everywhere? Though pricey, they were conventional … and then the automotive world became unconventional and tech-y. Rolls-Royce needed to change its approach so, fresh with a new owner (BMW) and an influx of cash, the company from Goodwood reimagined itself as an imposing presence on the boulevard stuffed with horsepower, tech and swagger. Today, the modern Rolls-Royce is truly a rare thing, available for the select few who demand the kind of distinction that a $200,000 Mercedes simply won’t provide.

Rolls-Royce now has stepped up to the plate to take its position up a notch with the Spectre, its first fully electric motor car. What will the status slaves say about this? Before we get into the social commentary, let’s examine the new Rolls.

The company feels the Spectre “demonstrates how perfectly Rolls-Royce is suited for electrification.” This is indisputable considering how many high-end brands have been playing around with electrification technology, like when Ferrari introduced the SF90 Stradale. “A Ferrari Prius? Satan has won!” you may have screamed several years ago, yet the world continues to plug along, and Ferrari continues to raise the bar.

“Spectre’s all-electric powertrain will assure the marque’s sustained success and relevance while dramatically increasing the definition of each characteristic that makes a Rolls-Royce a Rolls-Royce.” If you speak American, it seems to be saying that no matter how personal transportation evolves, you can expect Rolls-Royce to seize upon new aspects of automotive evolution and make them distinctly Rolls.

Charles Stewart Rolls, the co-founder of Rolls-Royce, recognized this way back in 1900. In fact, he recognized this with EVs: “The electric car is perfectly noiseless and clean. There is no smell or vibration. They should become very useful when fixed charging stations can be arranged.” The Brits prob would use the word “prescient” but, to a marketing guy, he or she would say it is on-brand. The powers-that-be at Rolls-Royce today call that “a prophecy fulfilled.”

And since it’s a Rolls-Royce, the number of hoops the Spectre had to jump through during development would be worthy of a generation of slaves: a journey of more than 1,500,000 miles simulating 400 years of use. All this R&D pays off not only for the Spectre, but also for the brand itself because Rolls-Royce is dedicated to a complete EV portfolio by 2030.

But enough of Rolls-Royce talking about itself — what’s the deal with the Spectre? The company likes to think it has created an Ultra-Luxury Electric Super Coupé. It’s a reference to the “indulgent” proportions “specified in response to a commitment that there is no greater luxury than that of space.” Alright, a false start — what’s the deal with the Spectre? It looks like the Rolls-Royce of today, yet it so happens that it’s an EV. The company claims it’s the most aerodynamic Rolls, with a coefficient of drag of 0.25.

In profile, the Spectre resembles a yacht, and why not? It likely will cost as much as one, though its design was inspired by fastback Phantom Coupé. Those who go to the bar for Trivia Night will love the fact that the Spectre is the first production two-door coupé that rides on 23-inch wheels in almost one hundred years (no, Master P was not the first to do this).

The famous grille is illuminated with 22 LEDs lighting the rear side of each vane. Inside, it’s what you’d expect a Rolls-Royce to be. No cow here will have to deal with the indignity of having its hide used in a Vauxhall. An interesting option is the Starlight Doors, which incorporates almost 4,800 softly illuminated lights that simulate shining stars at night. This was a feature in the headliner of the Phantom Coupé, and now the sky has been flipped on its side. There also is an over-the-top nameplate on the dashboard with similar illumination, though this one inspires door envy as it features over 5,000 stars.

An all-aluminum spaceframe, which includes extruded aluminum sections and the integration of the battery in the structure, enables the Spectre to be 30% stiffer than any Rolls-Royce up to this point. Rolls may brag about the resultant low seating position or 1,500 pounds of sound deadening to distinguish it from the groundlings.

Yes, you read that right. Perhaps the 0-60 mph in 4.4 seconds is impressive for such a large and heavy vehicle, but wasn’t Colin Chapman British too? To achieve that speed, Rolls-Royce would have said in the past that the power output was “adequate” but preliminary data shows there will be 900Nm of torque from its 430kW powertrain, and that it will be able to travel 320 miles on a single charge, which is typical for EVs of all price classes. Egalitarian? Bite your tongue!

So, what does that leave us? A four-wheeled, 6,500-pound virtue signal that gives the finger to the oil companies (though with extended pinkie) yet is a symbol of conspicuous consumption. Get with the program, Daddy-O and hail the new King!