The “Bubbletop” with a Canadian twist 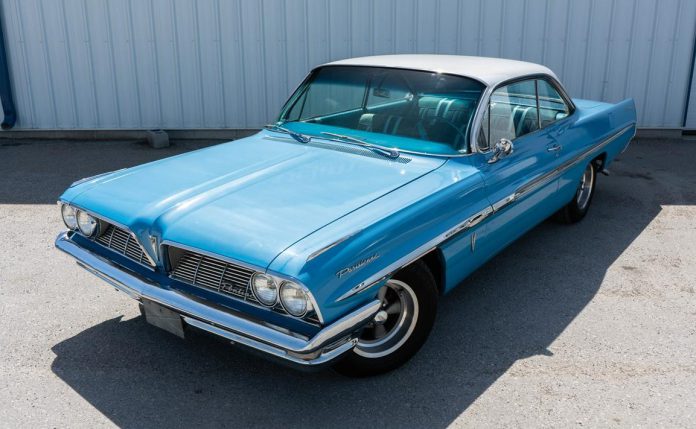 The story on classic Canadian cars can be complicated and confusing, but they make for a neat deviation from the norm. That’s why the Pick of the Day is a 1961 Pontiac Parisienne sport coupe listed for sale on ClassicCars.com by a private seller in Stratford, Ontario. (Click the link to view the listing)

Canadian Pontiacs from this era were based on Chevrolet chassis. As such, there was no Wide-Track Pontiac north of the border unless it was an American-built car. Due to tariffs, American cars cost a lot more than Canadian-market vehicles. Why the Chevy chassis in this case? Because there was no need to complicate the production line with more than one because Canada back in the day was much more sparsely populated than the United States.

So why bother with both Chevrolet and Pontiac if they were the same underneath? Because Pontiac historically was a strong brand in Canada and, by 1961, Pontiac had a performance image besides. Then, why different model names from Catalina/Ventura/Star Chief/Bonneville? Because Canadians have pride and distinction!

The Canadian Pontiac models were Strato-Chief, Laurentian and Parisienne, with the latter corresponding to an Impala in specifications. Engines ranged from the 261ci Strato-Six (which, in a different state of tune, was used in U.S.-spec trucks), Strato-Flash 283 and Astro-Flame 348. Notice how Canadians had different names for their engines too? Pretty cool!

This Richelieu Blue and Shelltone Ivory 1961 Pontiac Parisienne sport coupe was sold new at Century Motors Ltd. in Swift Current, Saskatchewan, and even has the dealer badge on the trunk lid. According to the seller, “This particular example is a rust-free car with original floors.

The car has had one repaint, but original paint can be seen on the inside of the trunk lid. The interior is also believed to be mostly original.” Power steering and disc brakes are nice to have, but the killer options here are the Astro-Flame 348 (with upgraded stainless steel exhaust system) and 4-speed. Vintage 15-inch Cragars and 235/70 radials are a nice trade-off from stock. For $31,500, the selling dealer is giving an opportunity to own a car that’s quite rare in both countries.

In 1965, a trade agreement between Canada and the U.S. called Auto Pact was signed. This removed the tariffs, and these unique Canadians started having less reason to exist, though even today you’ll find something unique north of the border.