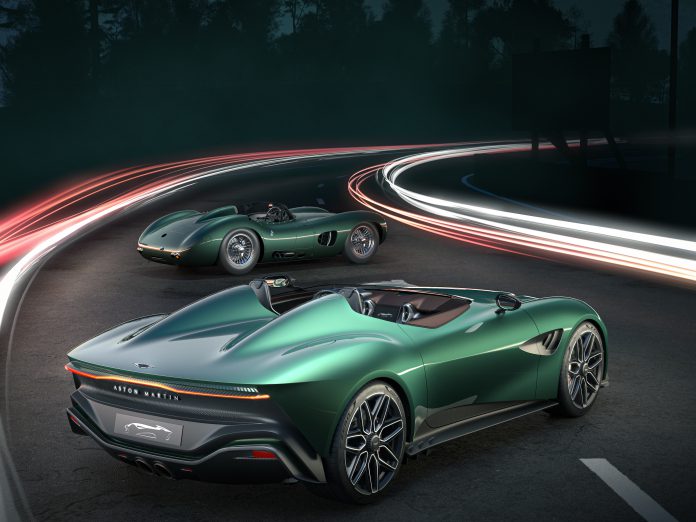 There was a time when bespoke automobiles captured the imagination of designers and the well-heeled. Especially during the 1930s, a decade pockmarked by the Great Depression due to Wall Street cash of 1929, coachbuilders like LeBaron, Dietrich and Bohman & Schwartz truly defined the term “rolling art” at a time when the rest of the country was suffering. The coachbuilding industry seems to have been upended by World War II, though the Italians continued the tradition into the 1960s.

So it is with great interest to The ClassicCars.com Journal that two stiff-upper-lipped British marques—Aston Martin and Bentley—are introducing bespoke vehicles for those who demand an extra dose of distinction in an automotive world where Luddites complain about how automobiles all look the same.

The Aston Martin DBR22 is a two-seater open cockpit concept that will be produced for select Q by Aston Martin customers. The DBR22 harkens back to the DBR1 and DB3S race cars from the 1950s that competed in the World Sportscar Championship, with the DBR1 winning the 1959 24 Hours of Le Mans (co-piloted by Carroll Shelby).

The new vehicle features all-new carbon fiber bodywork with a 5.2L V12 twin-turbo engine for 715 metric horsepower. Paired to an 8-speed paddle-shift automatic, a driver will be able to bring a DBR22 to 60 mph in 3.4 seconds, though there is no information on how much drag a scarf flapping in the wind creates. Worth noting is that the DBR22 showcases new production techniques, with 3D-printed aluminum parts that are bonded to form a rear subframe.

“By mating the classic art of coachbuilding with advanced materials and cutting-edge manufacturing technologies, DBR22 is a perfect blend of design purity, engineering precision, heart-pounding performance and true passion.”

Does your head hurt too?

“Its exceptional coach-built form is created from a minimal number of body panels to create a more sculpted, muscular presence,” which is complemented by 14-spoke, 21-inch alloy wheels. In a bid to make Henry Ford roll in his grave, the DBR22 customer is able to choose any color he/she wants, plus there are bespoke paint graphics, tinted carbons, and other unusual materials available both inside and out.”

So, you may wonder: What is Q by Aston Martin, and whom does Aston Martin select? If you have to ask, you may be unworthy of an answer so, while you’re eating your cake, ClassicCars.com Journal is tasked with bringing you answers.

Q is not as mysterious as it sounds and, no, it has nothing to do with pizza. Rather, it’s a reference to the secret service boss that gave James Bond his Aston Martin DB5 way back in 1964. And Q by Aston Martin itself is a decade-old, three-tiered division of Aston Martin featuring “the ultimate bespoke personalization service”. The first is the Q Collection, which consists of a “range of unique enhancements” created to allow Aston Martin customers “to personalize your Aston Martin beyond the scope of the core option range.”

The second stage is Q Commission, which is a “step into the world of the truly bespoke, individual sports car. A journey that involves a personal collaboration with our design team.” The third is the Wings Series, which is a series of aviation-themed Aston models in association with the Royal Air Force. This series has been produced since 2015 in numbers no greater than ten, with the last one being the 2019 DBS Superleggera Concorde Edition. As you’re probably a serial Spirit flyer, the Concorde will mean nothing to you.

Bentley’s announcement is a little bit different because it’s not so much of a throwback as is a peek into the future. While there is nothing better than a teaser image currently, the Mulliner Batur will be officially unveiled at 8 p.m. on Saturday, August 20th as part of Monterey Car Week 2022. In case you’re not familiar with Monterey Car Week, it’s an event that’s not for plebs.

The Mulliner Batur takes its name as a homage to the famed coachbuilder H.J. Mulliner & Co., which was a popular go-to company for those who wanted to arrive at the fox hunt in style. The Batur part sounds like a weird Volkswagen model (no irony considering Bentley Motors is owned by VW), but in reality it is a lake in Bali, Indonesia.

Bentley says the Mulliner Batur introduces a new design language “with classic features from the past reinterpreted into new, cleaner forms that rely on the use of contrast to provide definition.” Unfortunately, Google Translate wasn’t able to help with what that means, but this new design DNA will set the tone for future Bentley Battery Electric Vehicles (BEVs), with the initial launch occurring in 2025. Horsepower for the W12 has yet to be announced, but Bentley promises it will be matched by its most advanced chassis system ever, “bringing exceptional dynamism to match stunning straight-line performance.” Low-CO2 leather, natural fiber composites and 3D-printed 18K gold are “material options” not available to your kind, but does that mean there will be the possibility those features will trickle down to a Tiguan?